Living in a border city has turned out to be pretty cool given that it allowed us to visit three countries in one weekend like it was no big deal (and it really wasn’t). We did our grocery shopping in Germany and then just hopped across to France to spend our day in Strasbourg. Such is Europe.

In any case, our initial Sunday plans involved Zurich, but I priced out the tickets for Zurich versus Strasbourg. They were about the same price and I knew that if I waited a little while I could use the half pass to lower the Zurich price once I get it. 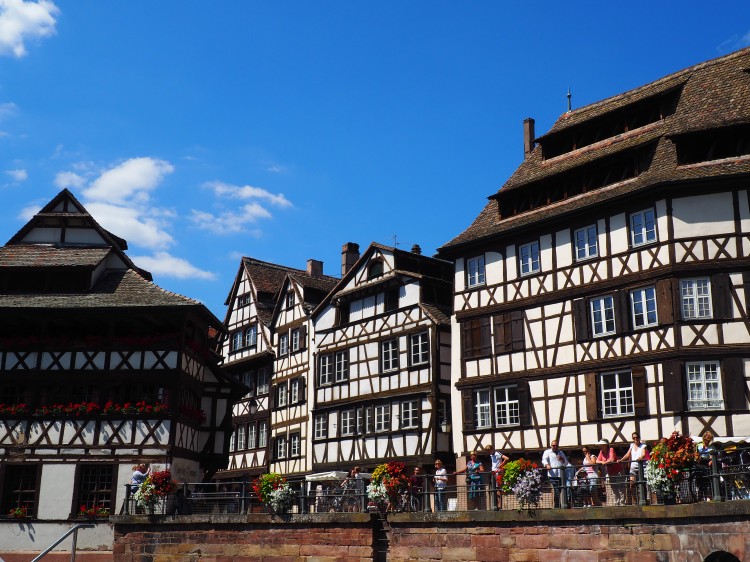 Strasbourg is a beautiful city that looks feels like it was ripped straight out of a Disney movie but has its own very fascinating history. It’s part of the Alsace region, which is known both for its wine and for the intersection of French and German culture (having been part of both countries at different periods of history). I went to Colmar last fall, so I was expecting the storybook architecture of the region. Strasbourg was just as charming, but had the added bonus of being the home of the European Parliament.

We took a late morning train into Strasbourg (which is about an hour and a half’s train ride away) and got to the city a little before noon. We spent the first part of our trip getting lost around Petit France, which is where you can see peak Alsatian architecture. It was as charming as we expected, but made slightly less so when we learned that it was historically where people were quarantined during the syphilis outbreak. Okay, I lie. It is still just as charming.

After some aimless wandering, we made our way to the Grande Ile, the large island in the middle of the city that house’s the historic heart of the city.

We walked through Place Kreber and towards the Cathedral Notre Dame du Strasbourg. You can see the cathedral throughout the city, but it’s pretty epic when you are right there. It’s also known for its very large astrological clock, but it was closed by the time we got to the cathedral and, unlike the big clock in Prague, you actually have to pay to see it. Of course, even though it was actually closed when we made it to the cathedral, I didn’t even remember the clock existed until much later in the afternoon, so we can also consider this delayed bitterness.

The plaza with the cathedral is also where the tourism office is, which is where we figured out (read: asked) how to get the tickets for the canal tour. It was pretty straightforward. For thirteen euro, you have the option of an hour long boat tour on a covered or uncovered boat. Our reservation wasn’t for a couple of hours, though, so we decided to find a place to eat in the meantime. That took some wandering. We tried to outplay the touristy restaurants by leaving the Grande Ile, but all of the more authentic looking winstubs (traditional restaurants in the region) were closed because it was a Sunday. So, we veered back towards the historic center and found a restaurant where we could partake in tarte flambees (or flammenkuchen in German) and some Alsatian wine.

After lunch, we still had about an hour to kill. We thought about trying to walk to the European Parliament building area, but couldn’t make it there and back before our boat tour left. Instead, we made our way back to the Grande Ile to people watch, but got drawn into the historical museum of Strasbourg.

Now, besides the fact that the air conditioning felt wonderful after spending much of the day wandering around in the sun, I really enjoyed the historical museum of Strasbourg and wish we had at least another hour to explore it. It’s located in the city’s old slaughterhouse and is filled with the very interesting history of the city. I wish we had more time to spend at the museum. We made it just about through the French Revolution in the hour that we had before we realized we had minutes before we had to be at our boat. We had to speed walk through another couple hundred years of history that looked even cooler than the first half of the tour. In short, I’d not only recommend it but would recommend taking your time in there. It’s not that expensive as far as museums go (6.5 euros). Also, you get to try on armor, so there’s that… 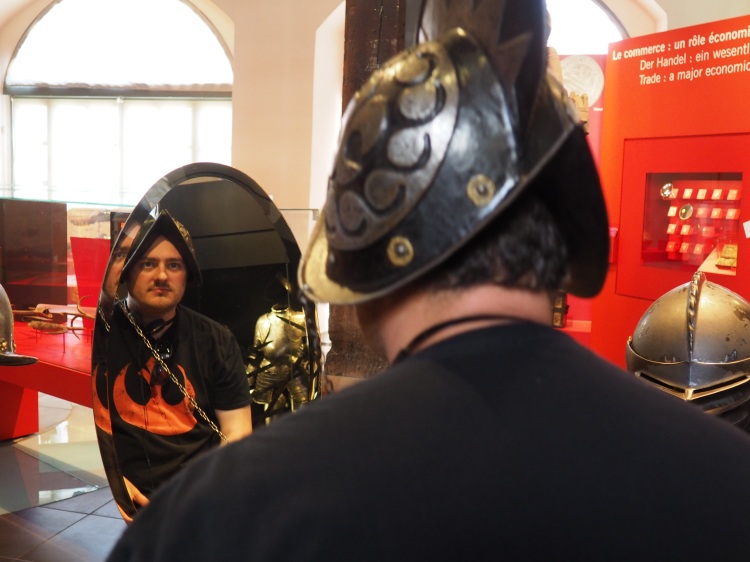 Other fun tidbits learned in the museum: Guttenberg spent a lot of time working on the printing press in the city and the Marseillaise (French national anthem) was composed there.

We made it to the boat just in time to get a nice seat on the side, but with just enough time to sit in the sun and regret the fact that I forgot to pack the sunscreen. I watched sadly as some guy was peddling sun hats right out of the dock and regretted some of my decisions. Despite the sunburn (which was mitigated mostly by using one of my Korean face masks), I would highly recommend choosing the uncovered versus covered boat. You don’t get to see as much on the covered boat and what’s even the point then? 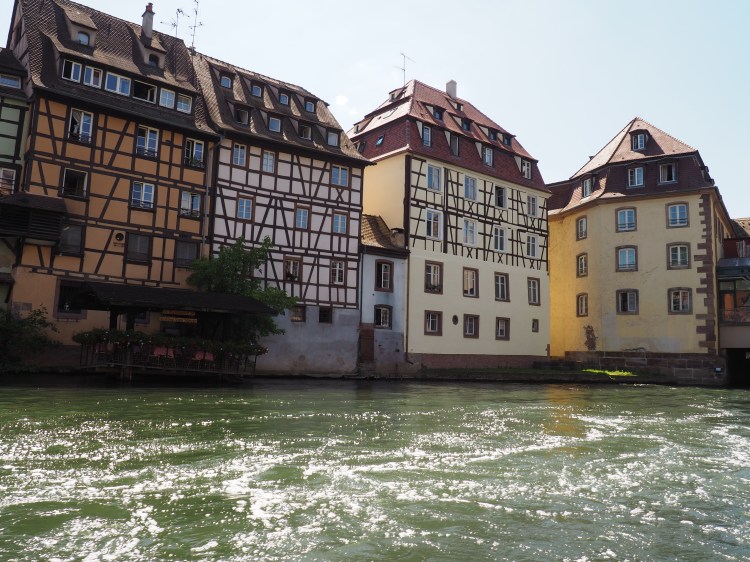 The canal tour was well worth it. We passed by a lot of the architecture and learned the history of the buildings along the way. There were two canal locks, which was something I had not had the chance to explore previously. We eventually made our way into the neudstadt, where the architecture quickly changed through various styles before making it out to the European Parliament and Court of Human Rights buildings. This saved us about three miles of walking and was kind of awesome to see by boat anyway. 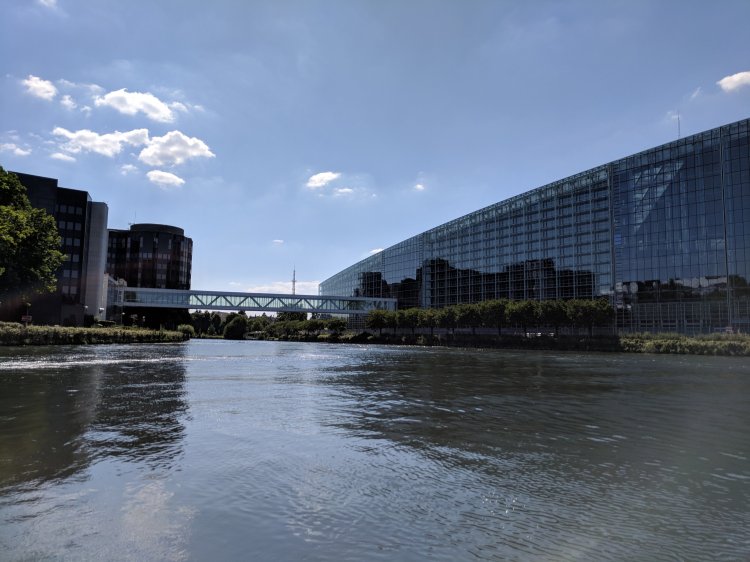 Although we returned to the docks with some mild sunburns, we both thoroughly enjoyed the trip. After getting back, we made our way back to the cathedral for our aforementioned failed attempt to see the astrological clock and then headed back towards the train station to go back home to Basel. We had set up shop in a very nicely air conditioned Starbucks while we waited for the train, but due to a sudden influx of the Garbagnati stress gene, rushed us to the train station 45 minutes early because I read the wrong time on the internet. We used that time to buy some Alsatian wine to bring home with us for another time.

All in all, our day trip to Strasbourg was a successful first weekend trip from Basel. While I am sure that there were things we missed doing in the city (including spend more time at the historical museum), Strasbourg was a great first excursion because it was just the right size to spend the day exploring by foot and boat.