Well, it’s now Wednesday and everyone has left me. Chris left on Sunday and the rest of the group left yesterday. But, you know, how can you be lonely when you have the Liars to keep you company? In any case, we spent the past weekend in Paris. I actually have not spent much time in Paris overall. Usually it’s been a very walking-intensive day trip on the way to or from another location. Even though it was just a weekend, it felt nice to do some sightseeing but also take things a little slower in the city for once.

We started our weekend trip with a 5 am wake up call that was made worse by the fact that we were up late watching Les Mis the night before. This is probably the worst pre-Paris hype movie, but it’s also Les Mis, so I don’t care. Getting tickets to Paris was also an apparent adventure because we got them a little too last minute and they had to work with the ticket people at the Basel train station to get some creative itinerary that wasn’t prohibitively expensive (procrastination lesson learned).

We got to Gare d’Est around 10 am a little tired but ready to go. Well, we were ready to go until we got to the area for metro tickets and saw a massive crowd. We made one failed attempt to get tickets at stations that were apparently re-charge stations before we gave up and waited in the long, long line. As we were approaching the ticket machine, a woman came up to us and asked us if we needed help. We told her no, that we knew exactly what tickets we needed to get and that we’d done this before. She stuck around, but it was so crowded that I stepped out of the way so Chris could get the tickets for everyone. I wasn’t really paying attention to what was going on, but my ears perked up a little when I heard Chris say that the machines only took French credit cards and we had to pay cash. The red sirens really went off when I looked up and saw the same woman pocketing cash. Before we knew it, we were through the gates with the sinking feeling that we were just scammed.

Little did the scammer know that the same plucky incompetence that got us into the mess also led us to accidentally exit the subway tunnels and immediately identify that, yes, we’d been scammed. We tried to make our way back to the ticketing area and once we did, Umma charged at the woman who was in the process of scamming some other tourists and made an absolute scene. She kept shouting that the tickets didn’t work and not to buy tickets from that woman. The woman quickly threw our money (minus a few Euros) back at us and ran out of the area. We got weird looks because of how loud the situation got, but we did ultimately get our tickets and left the area. In the end, it was kind of hilarious, despite the blow to any travel/common sense credibility we thought we had.

Learn from our failure and don’t fall for the silly scams. Someone also attempted to pickpocket Chris on the subway on the way to the hotel, so we clearly look like easy marks.

After dropping our stuff at the hotel and getting some crepes in our systems, we started our tours. Our hotel was an easy walk to the Eiffel Tower, so we started there. It was hot, crowded, and you apparently now have to go through a lot of security to get to the actual Eiffel Tower area, so we didn’t stay there for too long before we started what was supposed to be a trek to the Arc de Triomphe in the heat.

Instead, we got distracted and very nearly talked ourselves into taking a city tour on a tuk tuk before they got rushed off by the police (and you wonder why we were an easy target). Instead, we opted to take a cruise down the Seine because we thought that’d be cooler and more refreshing. It was one of those Hop On/Hop Off boats so we could just take the Seine down to our POIs. The boat ended up being a little more like an open air oven, so we were both overheated in an enclosed area and had little to no shade. It was nice to see Paris from the Seine, but we got off at the Notre Dame Cathedral and called it a day on the boat tour.

I love the Notre Dame Cathedral. It doesn’t hurt that the Hunchback of Notre Dame is one of my favorite Disney movies and I definitely was singing the songs a little while we were waiting in line to get into the Cathedral. The Cathedral is also just stunning both inside and out, so it was nice to be able to take some time and stroll around the inside. 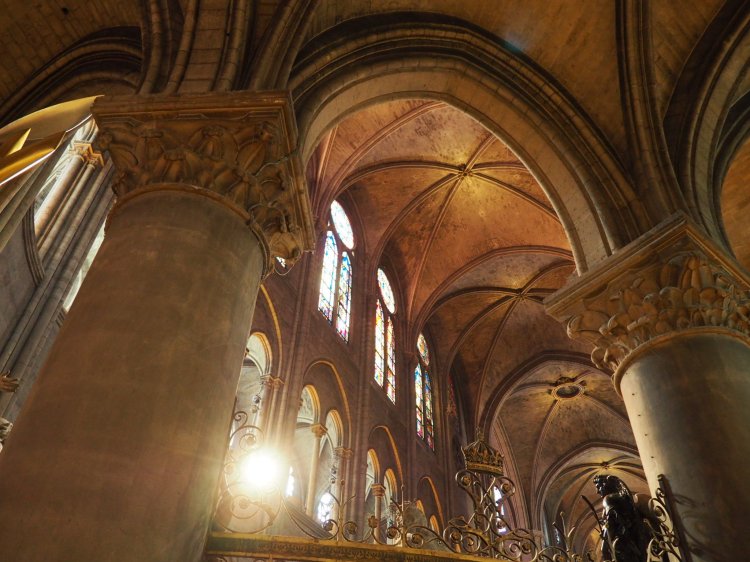 Well, I had fun in the Cathedral at least, but Becca and Miranda were much more interested in playing with the pigeons outside. It was also ridiculously hot by then and our five am wake up call was finally wearing us down a little bit. We opted as a group to take a break at the hotel for a while before things cooled down. It helped and I’m pretty sure everyone slept a while.

We got back out around 8, where we tracked down some much-needed Korean food and then made our way to Montmarte to see the Sacre Couer Basillica. This was the first time I’d seen the basillica and I don’t think any of us were emotionally prepared to climb all the stairs we had to climb to get up to the top. Every time we thought we were done climbing, we’d turn a corner to see a new set of stairs. We did find some ice cream along the way and it was fun touring the Montmarte area.

It took a lot of climbing, but we did ultimately make it up to the basillica. Suddenly, all the whining and sweating paid off for the lovely view of the city. It was quite a party up there too, with a lot of younger people blasting music and drinking.

We took the funicular down and did some souvenir shopping before we walked to the Metro and made our way back to the hotel. We (as well as some nearby rats) had a lovely view of the Eiffel Tower and happened upon a memorial to victims of persecution and racism on the way back.

Chris left early Sunday morning and we had a late start, so we took it somewhat easy on Sunday. We had planned a few stops in, but really just barely had time to do a handful of things. We started at the Statue of Liberty Replica on the Ile aux Cynges, where we had breakfast and walked around. They also have a small fitness park on that island with climbing holds that we did not get to experience.

We actually did make our way to the Arc de Triomphe from there, where we stood in the middle of the road to take a photo like the other tourists there.

This was followed by a very leisurely stroll down the Champs Elysees. By leisurely, I mean that we stopped in multiple stores along the way. At some point, we lost Becca and Miranda to the Louis Vuitton store. They were gone for a long time, so I got to go in and find them and got to field the weird stares from the nicely dressed people looking at me in my shorts and Britney Spears t-shirt. On the upside, we also got some macarons and pastries along the way.

We got back to the hotel with not too much time before our train back. It was just enough time to gather our stuff and do a quick trip through the Korean market to stock up on my groceries. We made the train, but it was pretty close given that our transfer added an unexpected fifteen minutes to our trip. We made it though, and ended up having quite a feast of sandwiches and pastries on our trip back to Basel.

Our weekend in Paris was a little hectic and almost started off on a pretty sour note. In the end, it was fun and oftentimes goofy trip to the city, but that’s our style. I’ll be back at least in September. Paris is so close to Basel, though, there may be an additional trip or two to that area. Maybe next time, we’ll even focus more on the French food 😉