I am writing to you from my hotel room in Vienna. I am up earlier than expected because I had one of those classic travel moments where you wake up in a hotel room and don’t remember where you are (#relatable). It’s also snowing outside so I may have once again not packed appropriately for the weather. Anyway, while this could have typically been a good excuse for an early start, I’m not inclined to go out in the snow quite yet.

But, we’re back to Amsterdam. It was a quick weekend trip planned because the troop was leaving from Amsterdam that Sunday.

In typical Garbagnati fashion, our day in Amsterdam involved a pretty decent amount of eating and some level of retracing steps from Chris and my trip there the month before.

We stayed at an airport hotel because of their early morning Sunday departure, which meant that getting to town took a while. 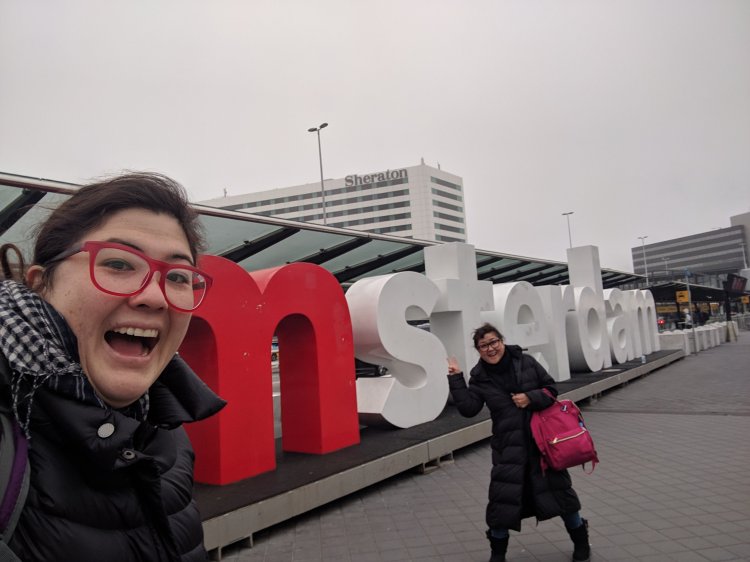 We learned that a replica IAMSTERDAM sign exists at the Schipol Airport and decided that we’d rather just go to the practically empty one than fight people to take photos at the one in the city. Okay, so that was some laziness involved too. James also took this as a good opportunity to get a waffle.

Chris didn’t eat until late morning, though, which meant that we had to contend with my hangry husband as we wound the canals of Amsterdam.

Our first actual stop was back to the frites stand we went to last time. With a larger group, we were able to sample more of their sauce options but the classic may have still been my favorite. The bar across the street lets people eat the frites inside if you buy a drink, something we took advantage of given how cold it was in Amsterdam. 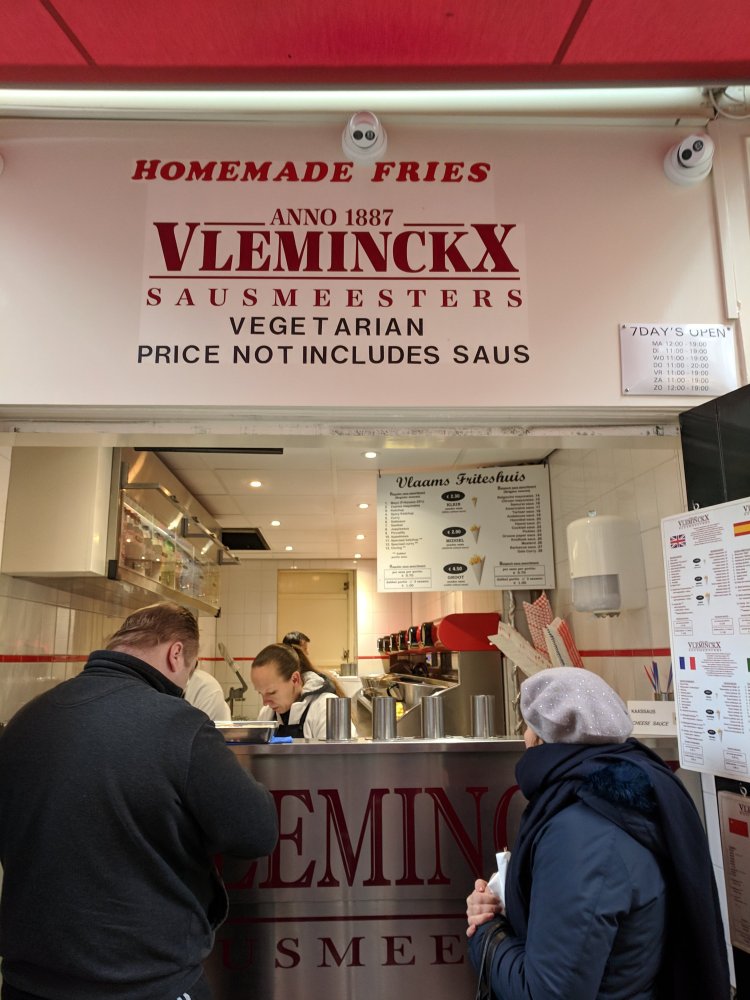 We backtracked a little after that to go through the university to get Mia to a yarn shop on some boutiquey street. Can’t remember the name, but I lasted a full three minutes in the shop before going to a nearby print shop.

It was a lot of walking after that as we made our way through more canals towards the Albert Cuyp Market. Along the way, we had a failed stop at a bar for bathrooms, a stop to sample (and buy) some Dutch cheeses, and a short stop by Rembrandt Square so Mia could continue her dog tour of Europe.

We finally made it to the market, which Umma immediately dubbed Dutch Namdaemun and we made our way in. Now, this market was a very controlled experience when it was just Chris and me. With the five of us and everyone’s shiny things complex, the trip was absolute chaos and we spent a lot of time in the markets (no complaints here). Chris and James immediately left in search of a restroom and we somehow lost Mia.

My shiny things moment where I lost everyone came in the form of kibbelings. This could come from years of episodes of Anthony Bourdain and Andrew Zimmern’s various shows or my idol worship of Rick Steves, but if I see locals lined up for street food, I’m very often inclined to join. This hasn’t failed yet, even that time I forced everyone to line up at a small stand for small cups of alcohol in Lisbon several years back (we ended up trying ginjinha, which is amazing). Anyway, this time I saw people lined up for an assortment of fried fish. Since I knew I wasn’t going to get anyone to do the herring with me, I went for fried fish. It was delicious. Had a bit of a different flavor than the many fish and chips we had in Edinburgh. I would highly recommend it.

There was a lot more shopping in the market. James decided to buy the bulkiest Christmas sweater he could find because everyone was already stressed about space in their bags. I’m surprised they were able to pack it, honestly. Umma found jewelry and Mia and I found the largest stroopwaffel. 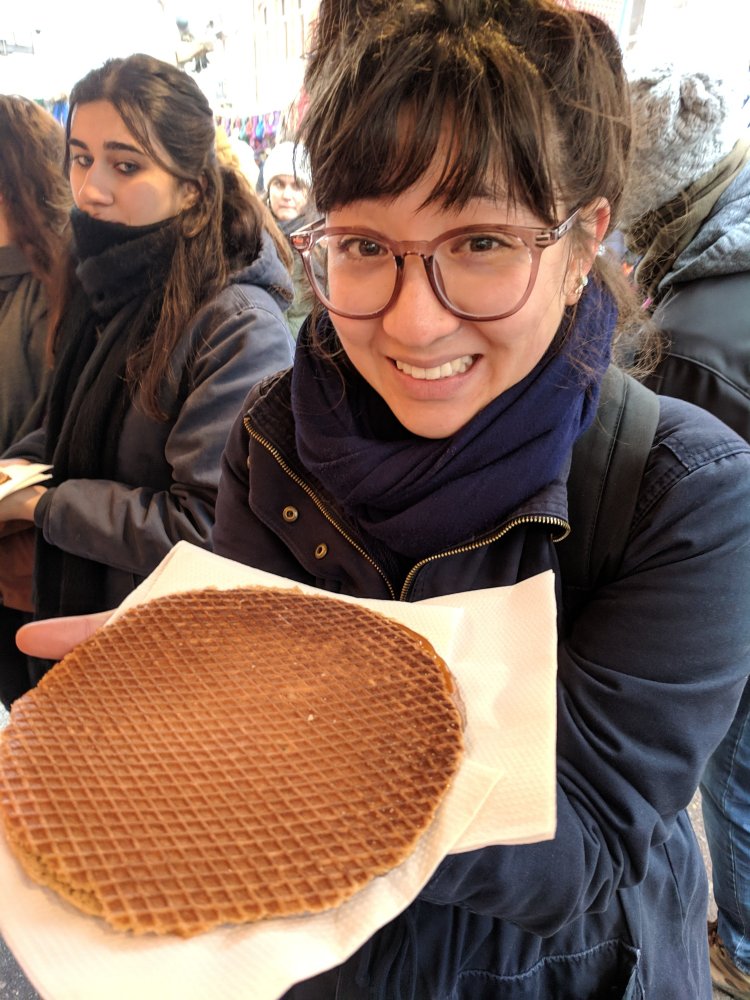 We were cold and exhausted by the time we made it to the other side of the market. Chris also promised Umma some famous hot dog restaurant, but we somehow ended up at a Wok to Wok to get out of the cold and sit down for a while. Also, noodles. 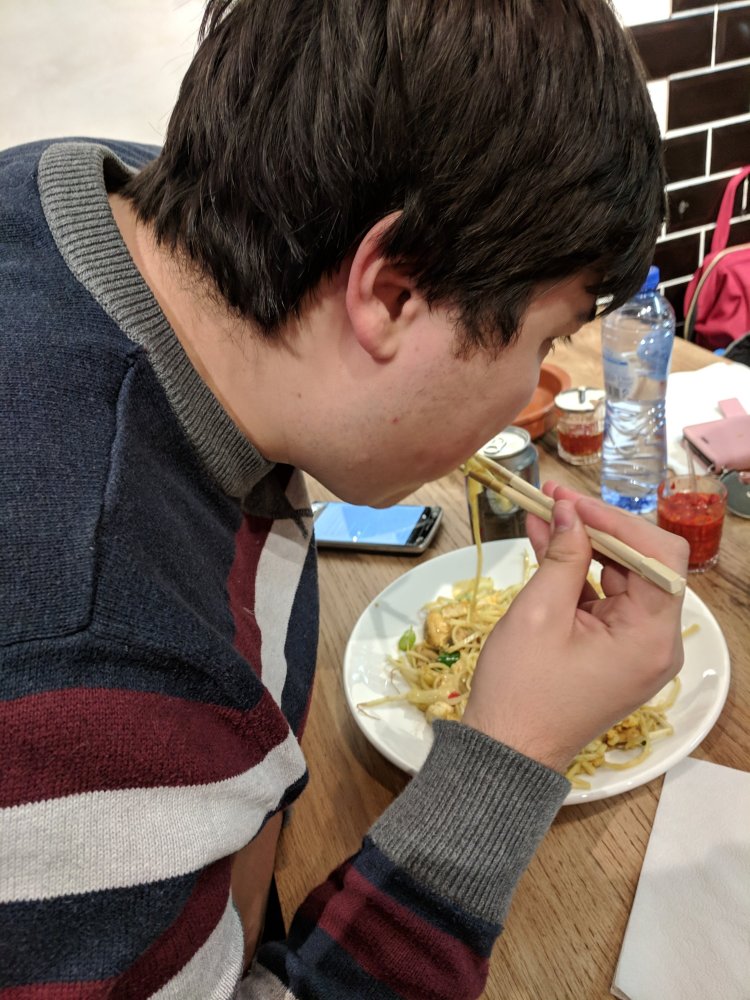 Chris wasn’t feeling well at that point, so we decided we should probably start making our way back to the hotel. This, of course, meant we wouldn’t make it back to the train station for a couple of hours because there was more shopping to be had. This included the flower market because Chris wanted to make some purchases there he didn’t make the previous trip and Uniqlo. 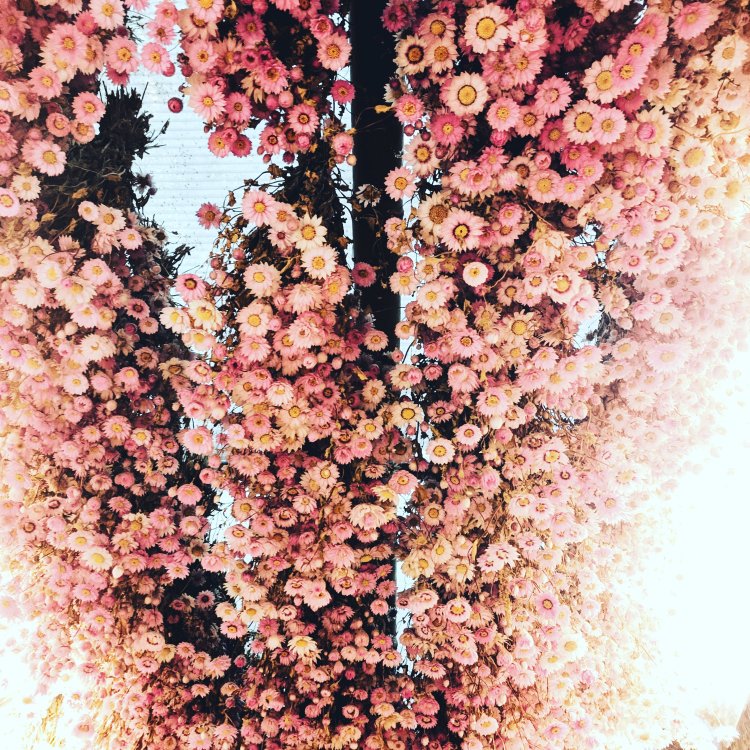 We eventually made it to the train station and thought we barely made the train that would take us back to the airport. Unfortunately, we ended up with a ten or twenty minute delay, which then led us to also miss the hotel shuttle for the hour. 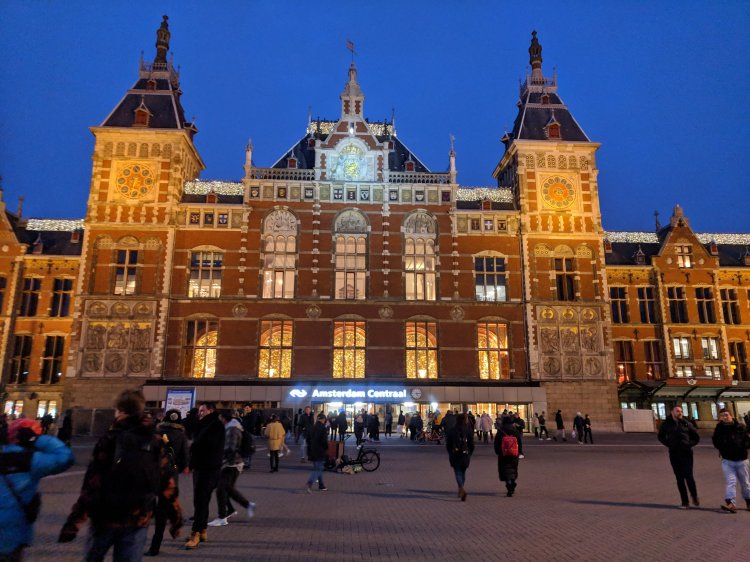 With an hour to spare, we found a cafe to sit at and order drinks. We also took the opportunity to try bitterballs, something that made us almost miss the shuttle again.

We made it back to the hotel and watched them somehow manage to pack all of the day’s aquisitions, including James’s stupid sweater. After all of that, we were still somehow hungry. There was an event space next door to our hotel. There was a churrascaria restaurant that we were not hungry enough for and an Italian restaurant we looked too grungy for. This left us with an American themed bowling alley or McDonalds. So, my last dinner with the family and before they went back to the US was at a bowling alley.

Everyone left early the next morning (😢). I initially thought my flight on Sunday was much later and had a whole day trip to the Hague planned before finding out I also left relatively early. It worked out perfectly, though, because I found out on Thursday that one of my mentors, former colleague and dear friend Alison was in Amsterdam and I got to spend my Sunday morning in an international A-Team reunion. We caught up as much as we could over breakfast and a cab ride to the airport. It was a very pleasant addition to the trip and what I thought was going to be an otherwise sad Sunday.

The trip to Amsterdam flew by and was once again full of food. Despite the fact that everyone abandoned me, it was a fun trip.

One thought on “Amsterdam Revisited”