Vienna was one of the stops on the Alea’s 2018 Christmas Market Tour. The Christmas markets, which I will speak of in greater detail in a separate post, are pretty big in Vienna and I’ve been meaning to see the city for a while, so it worked out well. Vienna is a city that I could have easily spent more time in, despite my very full itinerary in the city. I ended up missing a handful of things that I wanted to do (including the big Nachtsmarkt).

I started with a walking tour of Vienna. We spent most of the time in the old town and learned a lot of the history of the city. It was a nice tour, but it was also ridiculously cold. It didn’t help at all that I apparently did not pack socks on this trip (-10 points from Ravenclaw).

The tour ended around St. Stephan’s Cathedral, which is also conveniently near an H&M, where I was able to get myself socks. Having resolved the big sock issue, I made a failed attempt at going up the spire in the cathedral. There was actually a long line coming out of the cathedral, so I dropped it all together in favor of food. 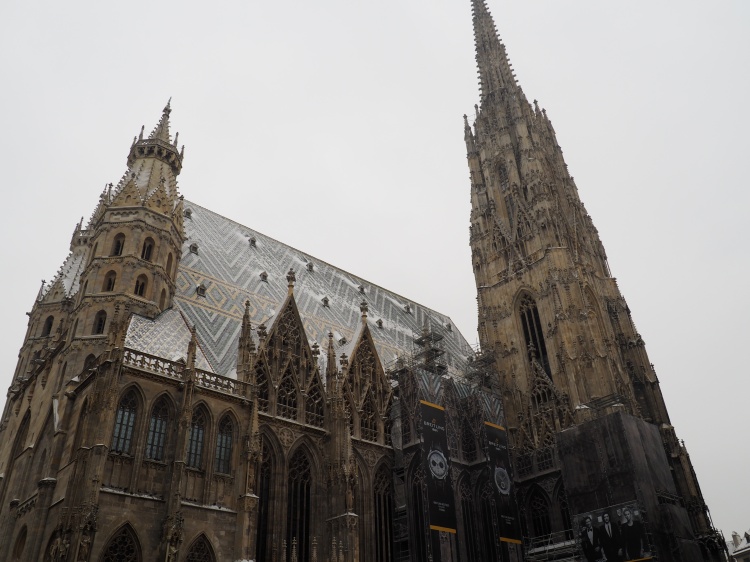 Now, this is where my plans went awry a little. I was going to grab something on the go to maximize sightseeing, but it was so cold that my Kfood spidey senses brought me to a Korean restaurant. Soup would have been perfect, but dolsot bibimbap also hit the spot.

One of the things that I learned during the walking tour was that they do daily tours of the opera house. I didn’t expect to be able to get to the opera that night and theater tours make me incredibly happy, so I figured I’d try even though I had a reservation for the guided tour of the Spanish Riding School at 3. When I got to the opera house, I quickly found out that the line to get tickets was significantly longer than I expected and the tour was too late for me to try to do both.

So, I did what anyone else should do when they have time to kill in the Christmas season, I had some mulled wine and waited for my tour to start.

The Spanish Riding School tour was pretty fun. I had looked into tickets to go to one of the shows, but it was either showed out or not available the date didn’t work out. I did the tour instead. The best part was obviously the horses, but we weren’t able to take photos for safety reasons. I did learn that one of the horses in the horse hall of fame was named Alea. …Okay, maybe not something to brag about, but yay horses!

The National Library of Austria was right around the corner from the Spanish Riding School and that was quite an experience. The library is beautiful. Sure, I read the exhibits that were up in celebration of the library’s 650th birthday, but I could have just sat in there pretending I was living the best parts of Beauty and the Beast. Look, the love story and message about beauty being on the inside is great and all, but the library the Beast gives her is the true life goal of the movie.

Next on the tour of Vienna was the Viennese coffee shop experience at Cafe Hawelka. The cafe was on the list of historical cafes recommended by the tour guide earlier in the day. Stepping into the cafe was like taking a step in the past. The cafe was significantly more crowded than I expected, but I somehow managed to get a table. I got some coffee, tried a sachertorte (delicious) and mapped out my plan for my evening Christmas market hopping. I probably could have stayed longer. Given the crowds, I didn’t want to take up space for too long and headed out for an evening of market-hopping (which we’ll discuss in a separate post). 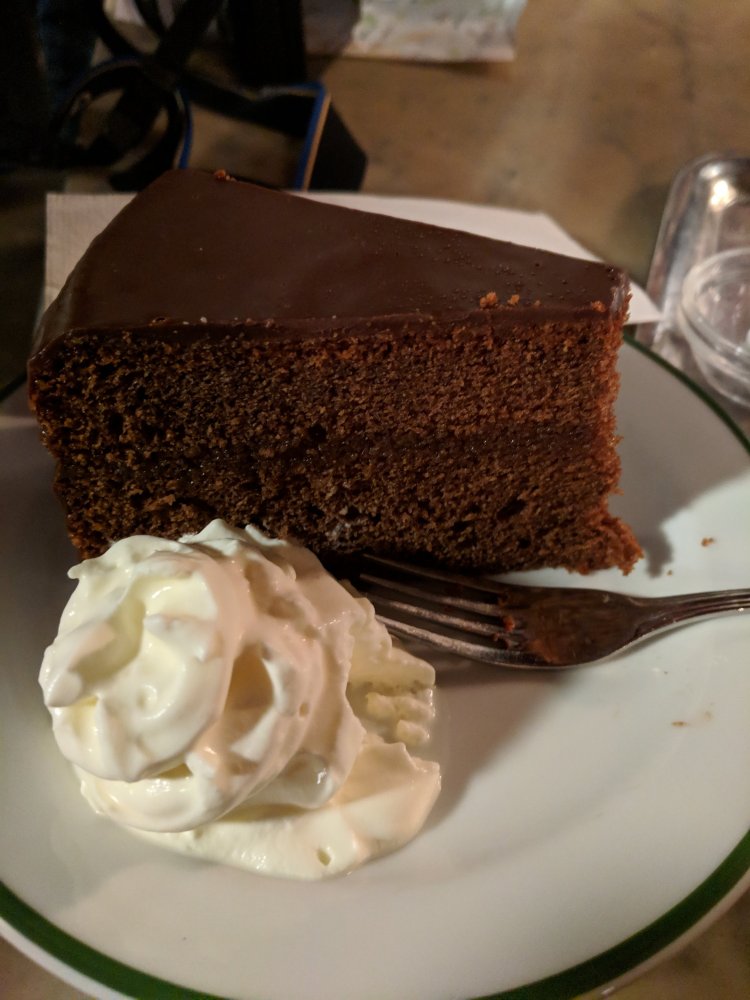 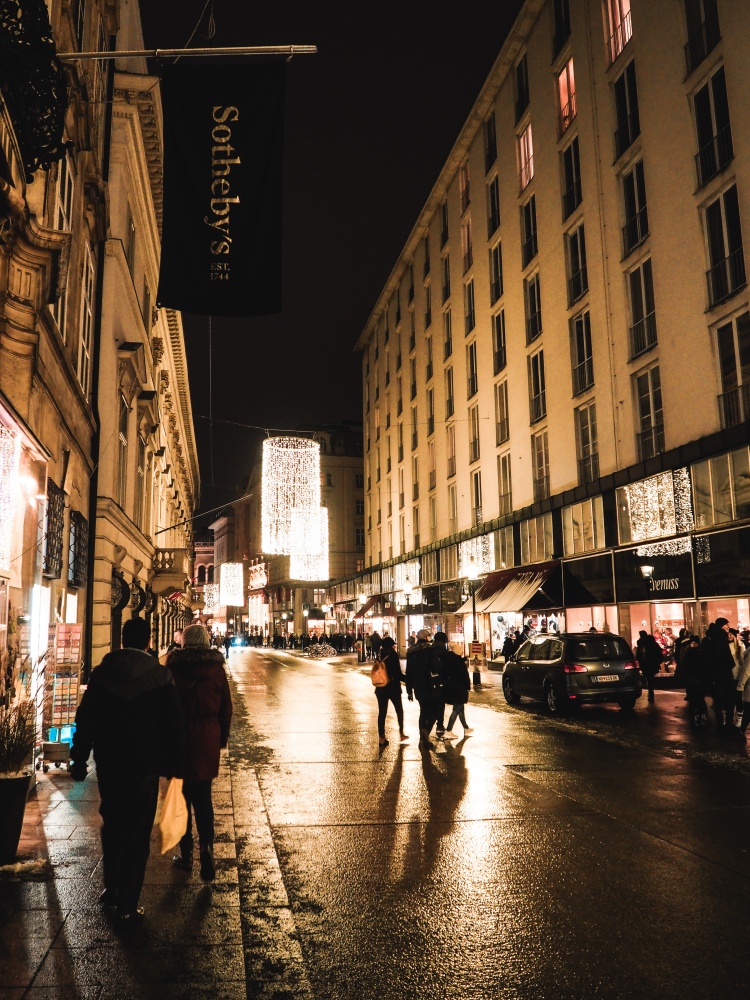 I spent a lot of my next day doing some museum-hopping. A few weeks before the trip, I read an article about the opening of an exhibit at the Kunsthistorisches Museum that was curated by Wes Anderson and his partner Juman Malouf. This appealed to the faux-pretentious Wes Anderson fan in me and I had to go. I heard on our tour the day before that the museum gets crowded, so I tried to go as close to the museum’s 10 am opening as possible. When I bought my tickets, the person at the ticket booth wanted to make sure I was okay with the fact that the big Bruegel exhibit was sold out. Little did he know that I was at the museum because I have watched Rushmore more times than any person probably ever should.

The exhibit was pretty delightful, too. It was so Wes Anderson. The exhibit is centered around a coffin of a spitzmaus mummy (hence the name, Spitzmaus Mummy in a Coffin and Other Treasures). It was practically empty when I got there, which was nice because I took my time in the exhibit. The audio guide with commentary from Wes Anderson, Juman Malouf and a very goofy Jason Schwartzman (!!!!) was worth the five Euros. I’ll make fun of myself for the fact that I love his movies, but the exhibit was worth it.

I actually really enjoyed the rest of the museum as well and spent most of the morning there. There were even mummies, which actually make me more uncomfortable than anything else, but were pretty cool. At some point, the museum did start to get very crowded. I felt like that was a good time for me to leave.

I left the museum right around lunch time, so I went to the 7 Star Brewery nearby to finally try wienerschnitzel and the unique beers they have at the brewery. I went with the hemp beer (kind of hoppy without the aftertaste) and the chilli beer (super intense at first, but not too bad). 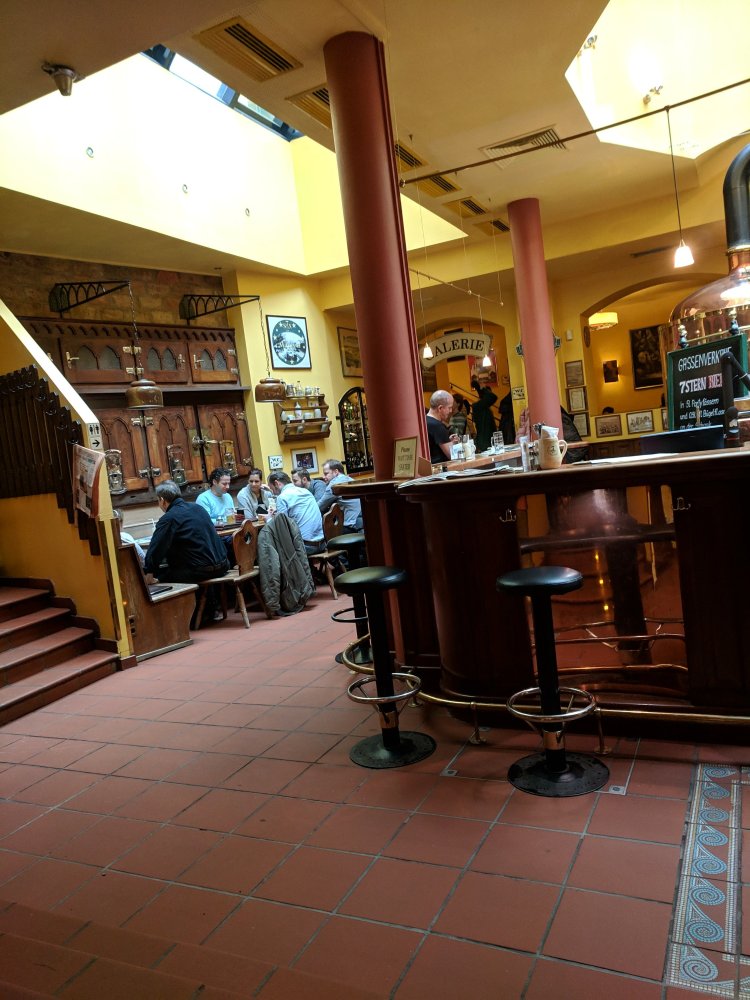 From there, I went to the Theater Museum, which I felt was the best replacement that I could get for not being able to do the opera tour Saturday or Sunday. Surprisingly, they had a whole exhibit on the Bosch painting and art inspired by it. I used to be fascinated by the painting, but it kind of reminded me of the Good Place when I saw it this time. I’m a sophisticated person, I know. There were a number of things to see there a little more theater-related. I enjoyed going through the exhibits, but many of them were in German. Also, there was also a dog marionette. 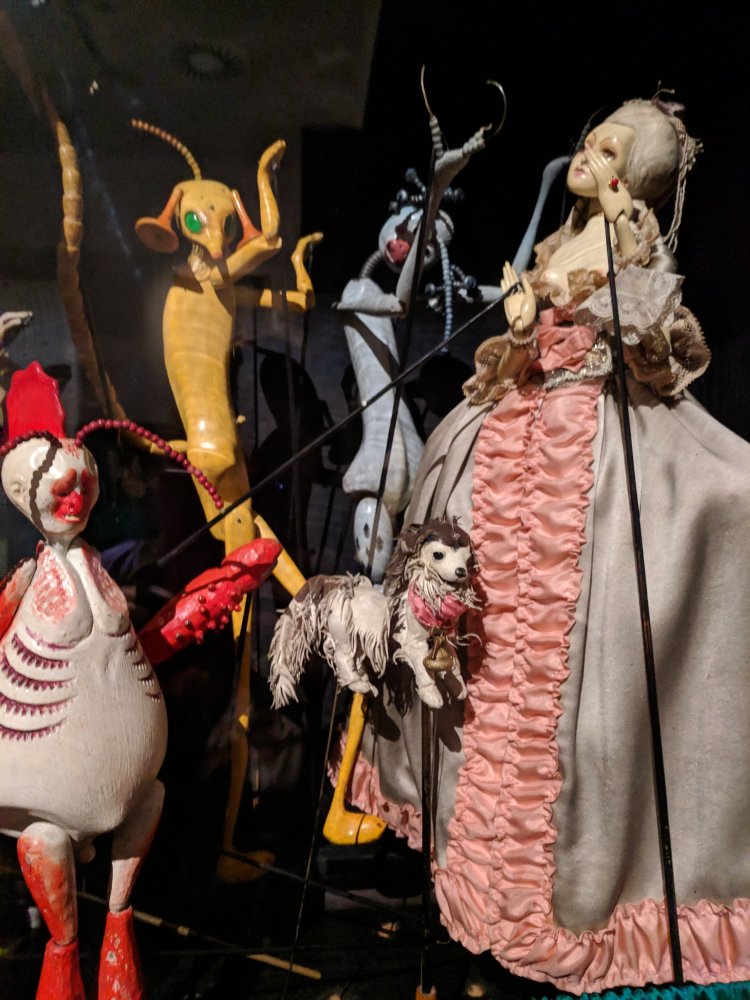 So that was Vienna. I fit a lot of stuff in a relatively short span of time and had a lot of fun doing so. With a little more time, I probably would have done another cafe on Sunday and I wish I had time to get to the opera in some capacity, but I think it was a pretty full trip already.