Today will be a relatively short blog post because Phantom Planet just got off of their 11 year hiatus and I can’t today. Actually, the real reason is because I didn’t think it would be right to combine this with the larger Fasnacht post. Liestal is a ten minute train ride and while people combine this with the rest of the Basel festivities, it not a part of Fasnacht and is in a different canton. Thus, it gets its own, albeit short, post.

Chienbäse takes place the Sunday after Ash Wednesday and, therefore, takes place hours before Basel’s Fasnacht kick’s off. The lights along the route go out, while a fiery parade marches through the town of Liestal. Historically, this was a way to celebrate the end of winter and the warming weather. Parade participants march through the town carrying burning wooden brooms (Chienbäsen) while thousands of spectators watch. Every now and then, there are carts in the parade with tall epic flames. The whole experience is quite a sight.

While we did the early afternoon flight from London to allow us to settle back into Basel relatively early in the day, the fact that we got back early was an added bonus. It meant that we would be able to attend this unique parade. I was a little disheartened when I got recommendations to be in Liestal early evening (~5 pm) as that was around the time our plane would be landing in Basel (assuming no delays). Despite a minor delay, we got to Basel with enough time to check Chris’s mom and aunt into their hotel, spend a few moments back at the flat and then pack up and catch a train to Liestal. We got in just after 7, right around when the parade started.

The Liestal we got to was in full Carnival mode. There were costumes, confetti and drunken people walking through the streets. It was almost like I was back in the Cologne I saw the weekend before. The parade was just starting, so we tried to catch some of it. What was got was the back of a lot of people’s heads and the soft glow of some of the initial cars. In other words, there was nothing much to see.

We used that as an opportunity to re-group and grab some hot dogs, schnitzel and glühwein for dinner before taking our chances with the crowds again. We found a better and slightly less crowded spot. For a while, it was still hard to see anything bit the tops of the flames, so we relied on tall Chris to get us footage of the parade through his phone.

The good thing about where we were initially situated was that we were shielded from a lot of the ashes. One of the most common recommendations you receive before attending this event is to not wear good clothes as they are bound to be ruined by falling ashes. I think the jacket I wore still smells like I was at a bonfire, but we spent a large part of our parade watching experience hidden in a little alley and missed a lot of the ashes.

The longer we were there, however, the more people would shuffle out of the crowds. This allowed us to slowly inch our way through the crowd, where we eventually got pretty decent viewing spots. 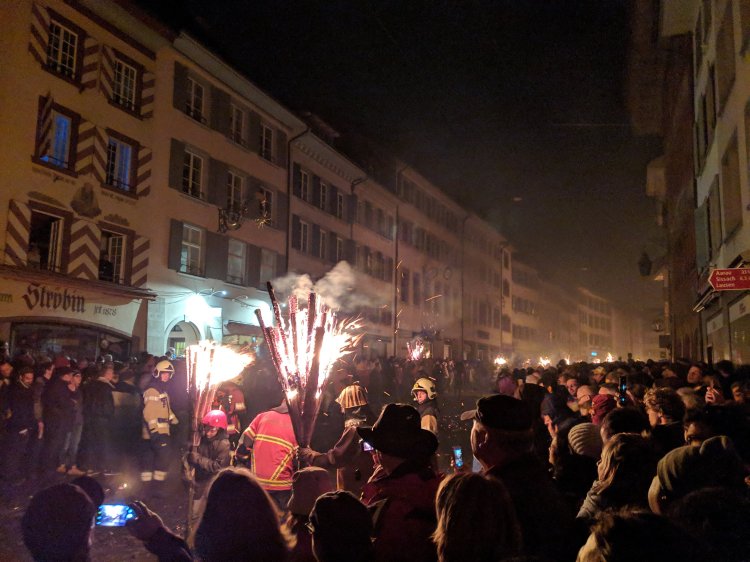 Knowing that we had to get back home to get sleep before our 2:30 am wakeup call for Morgenstraich, we eventually fought our way out of the crowd of parade spectators and fought out way onto the crowded trains back to Basel. Seriously, those trains were crazy crowded full of people who probably had the same early morning wakeup call. Of course, we only left after getting some delicious fudge and almonds.

Chienbäse was a great experience despite the constant battles with crowds. It’s essentially a giant town-wide bonfire. Now, they take a lot of precautions to make sure that the town doesn’t set on fire, but it still feels a bit like this event defies the odds. It’s certainly worth seeing if you are able to, but I would impart the same advice that was given to me – don’t wear nice clothes, prepare to smell like bonfire, be there early and be prepared for crowds.