Please forgive the horrible (or amazing?) pun of a title, but I couldn’t help myself. Venice is a giant picturesque maze. Despite all of the sad stories of overtourism in this city, it is always beautiful and never fails to impress. It was also somehow my second trip to Italy during my stay here in Europe. It’s turned out to be surprisingly difficult to get to most parts of Italy from here for a weekend trip. It’s fine, though, because I’ve managed to get in back to back trips to Italy these past two weekends. True to form, our best option for Venice was a very early flight from Zurich, so we stayed the night at an airport hotel and made it to Venice early in the morning. 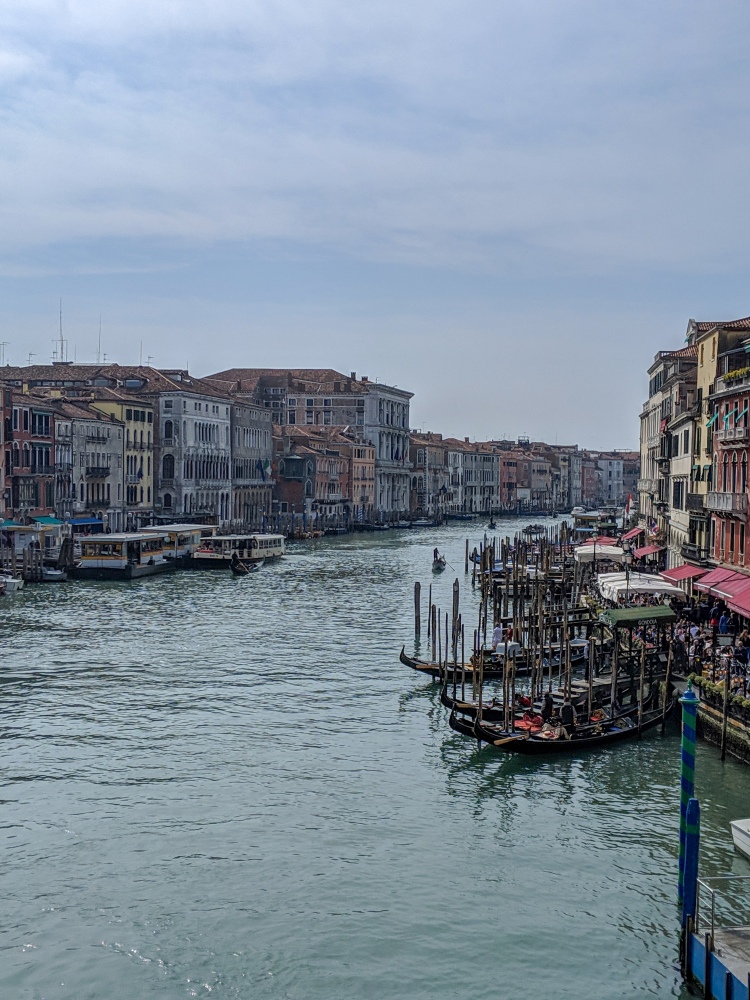 It took a long wait for a vaparetto, a long vaparetto ride and some navigating the crowds around the Ponte Rialto to finally find our hotel. We couldn’t check in yet, so we dropped off the bags and set off for some food and exploration.

The restaurant that we ended up at was pretty good. My goal for Venice was to eat as much seafood as I could fit into my system and this meal did not disappoint. While I leaned heavily towards the famous spaghetti neri of Venice, I ended up getting lobster pasta. It was a little messy but absolutely delightful.

We followed the meal up with some gelato at this fantastic gelateria nearby. I’m a bit of a snob when it comes to gelato and this place did not disappoint. I think it was Gelato di Natura, which apparently is a chain in Venice but whatever. Some things are chains for a reason. In any case, I got the Tiziano because I felt the family obligation (I’m descended from Titian somehow). I didn’t really know what the flavor was, but it was delicious and full of chunks of chocolate. It was perfect.

We walked around a little to digest food, which really meant that we got to do a little city exploring before we could check in and then go to our walking tour of Venice. We did the obligatory stop by the Ponte Rialto, this time taking the time to actually enjoy the bridge. Unfortunately, Chris and I did not have our gondolier shirts (or hats) to recreate the famous picture we took when we were in Venice together in 2006.

I got to play to my inner GWT and drag everyone to Acqua Alta, which is a famous used bookstore in the city. It’s popular because it’s particularly Instagram-friendly, especially the staircase in the back of the store that is made of old books. I figured the bookstore would be a little crowded, but did not expect the massive hoard there. It made it hard to navigate the store, but it’s still worth the trip.

After a brief interlude to check into the hotel and rest for a bit, we made our way back out to meet up for our walking tour of Venice. Our guide’s goal was to give us some history of the city and show us some of the lesser-known corners and sites of Venice.

We also learned a lot about the cisterns of Venice since they did not get fresh water in the city. I didn’t get a good picture of one, but they were one of those things that I didn’t quite pay attention to until we got the history and explanation of how they worked. I wish I got some better pictures of them, though, because one of the features of the cisterns were built-in animal water bowls. It warmed my animal-loving heart.

The second half of the tour was a gondola ride, which was actually the main reason that we booked the walking tour. The gondola line was a combination of the English, Spanish and French-language tour groups, which meant that the line to get onto the gondolas was pretty long. It gave me some time to grab everyone some much-needed water and also take a quick trip to the nearby Carpisa store. Given the one bag limit we had on our flight home, the Carpisa trip was mostly wishful thinking. 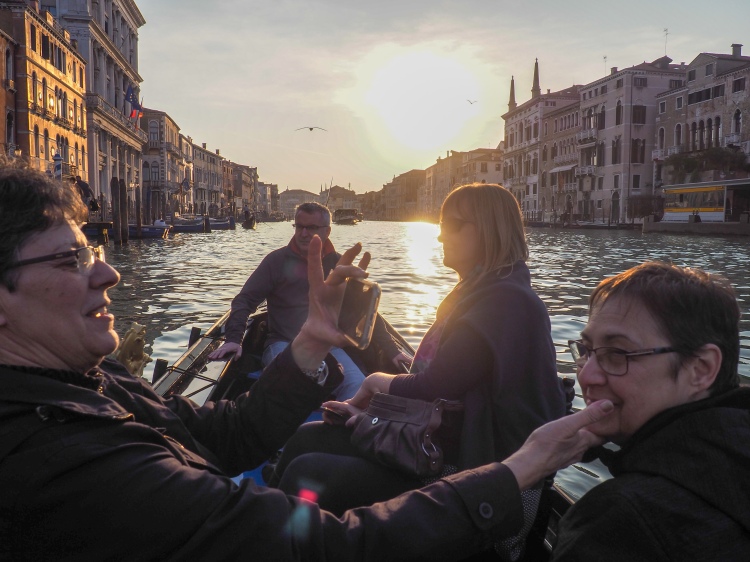 The gondola ride was relaxing, beautiful and a little short. The timing could not have been better, however, as we managed to hit the Grand Canal during sunset. It was quite an unbeatable view. We got a quick arancini snack after our tour and let Chris’s mom and aunt do some souvenir shopping (we did a bit as well).

We took a quick rest at the hotel before braving the maze to get to our restaurant reservation. Google told us that it was a 15 minute walk and Chris wisely had us double that time in that estimate. Even so, we managed to take a roundabout route to the restaurant and made it to the restaurant a little late. We ate at Taverna Scalinetto, which other than being a little away from the crowds, was reviewed by others as having delicious and authentic Venetian cuisine at reasonable prices. You can never complain about something like that. My meal was a bit redundant as I paired ravioli neri with sea bass and split an order of the fish of the day (sea bass) with Chris. Again, cannot complain about my choices, even the Aperol Spritz. 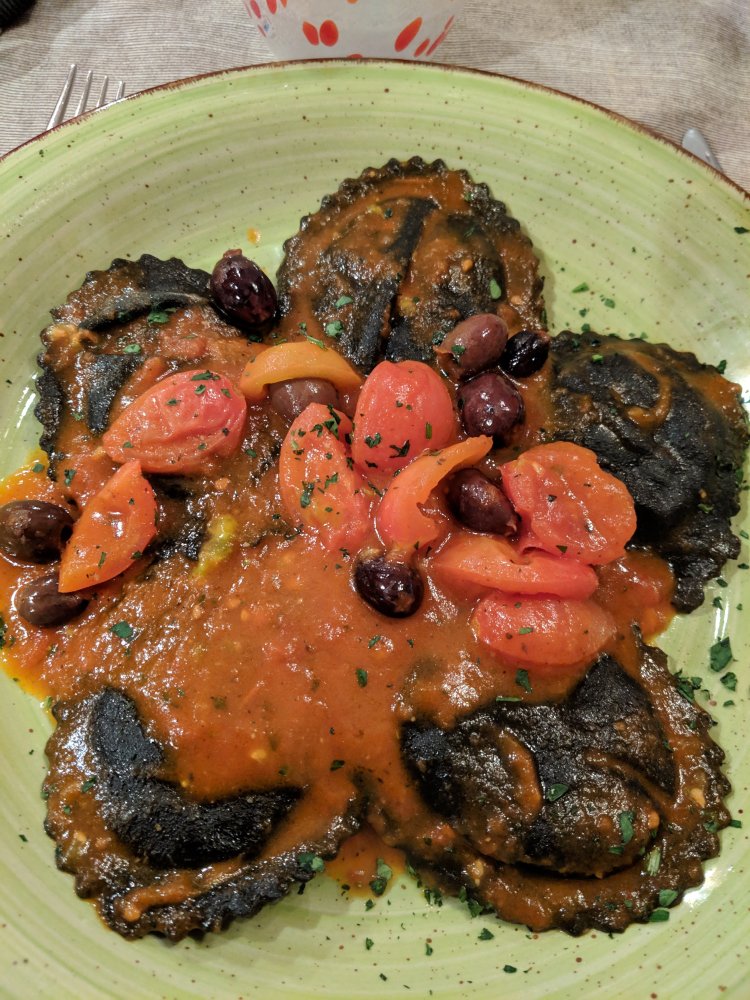 We found a much easier route to the hotel after dinner, which took us along the water and got us a beautiful evening (and non-crowded) Ponte dei Sosperi and Piazza San Marco. 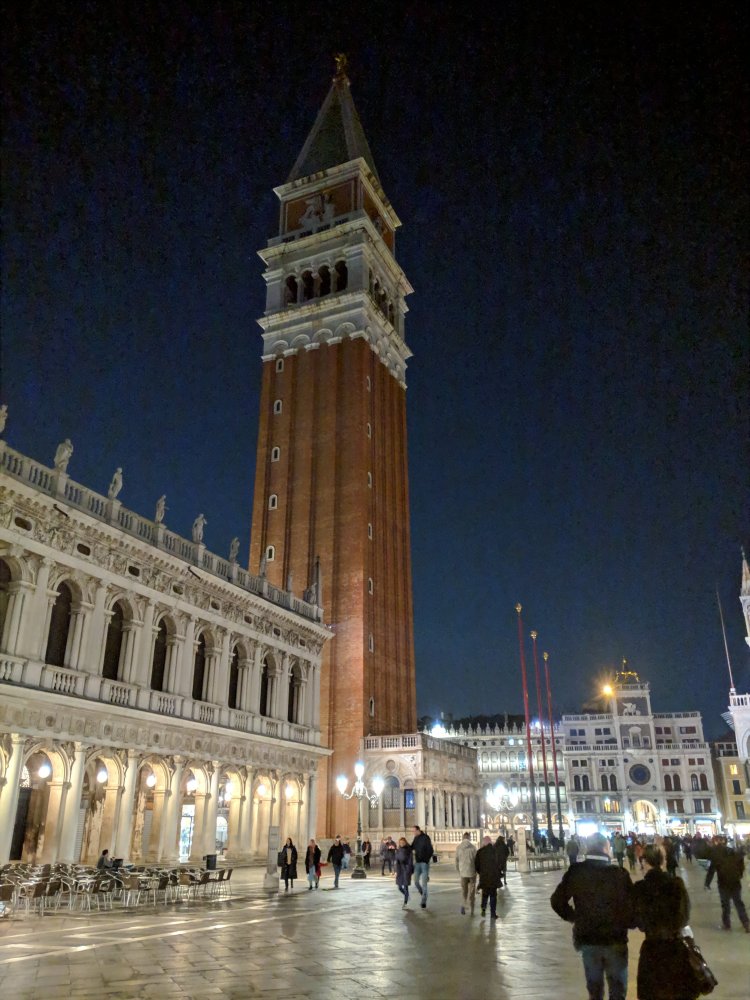 It was a long day, especially with the early flight to Venice, so we crashed pretty early. I will do the second half of the post covering our day trip to some of the surrounding islands in my next post.