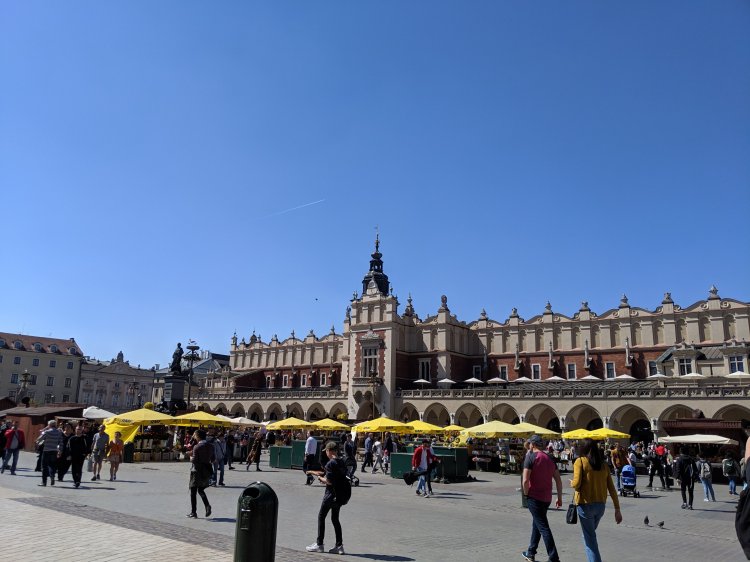 We spent our Easter holiday in Poland, visiting Krakow (a city I’ve wanted to visit for quite some time) and Warsaw (as it was easier to fly through that city). It was a short visit to both cities, but we managed to squeeze in as much as we could. I’m going to split the Krakow tour into two posts, though, as it’s too much for one.

I met my parents in Warsaw, meaning that I got to play only child for the week. We took the express train from Warsaw to Krakow on Friday morning. It was generally uneventful train ride, other than when we almost lost Umma right as the train arrived to the platform in Warsaw. We arrived in Krakow early afternoon. Now, there’s something about arriving in a brand new city, where you feel simultaneously disoriented and excited. Krakow’s main train station essentially drops you off in a giant mall, which was new but eerily familiar at the same time. Once you’re out of the mall, it was a pretty easy walk to Old Town. We even passed the big theater along the way.

Our hotel was in Market Square and was relatively easy to find. It also meant that walking through all the food stands in the giant market made us incredibly hungry. Our room was just about ready, which meant that we had just enough time to put our stuff down and regroup before heading back out into the city to eat and them meet up for our city tour.

Everything in the market smelled delicious, but it was the grilled onion smell at the kielbasa and shish kebab stand that ended up catching our attention. We tried some of that and some Polish crepes. 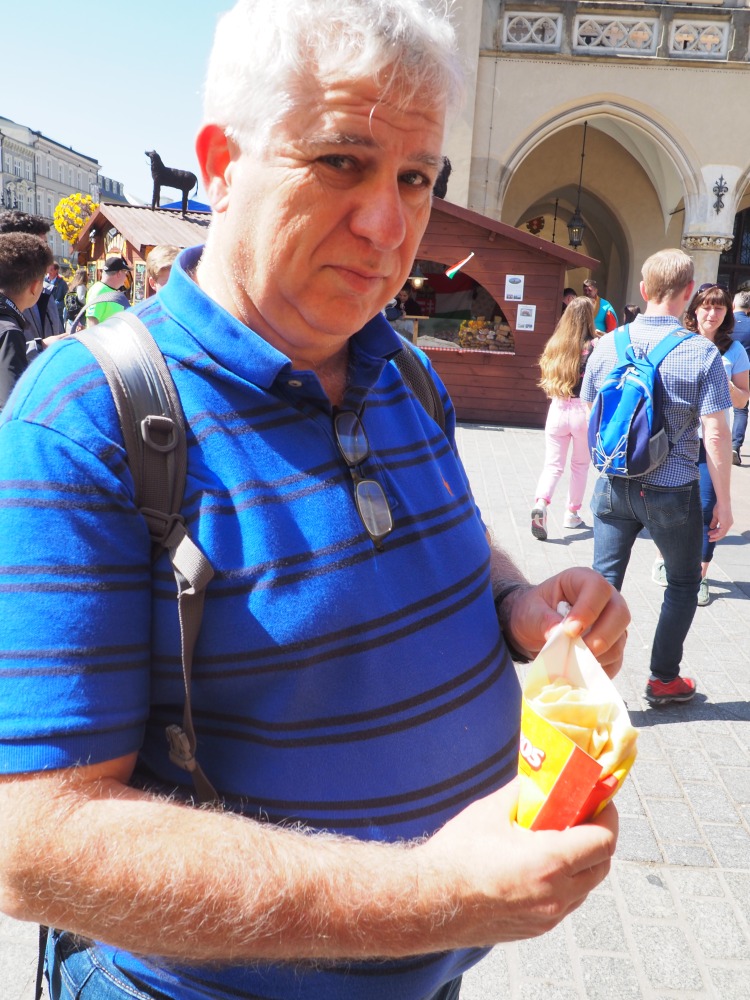 Our tour started in front of St. Mary’s Basilica. Our guide was late and, in retrospect, I should have spent some of that time looking at the inside of the basilica as the pictures I am looking at now are quite beautiful. We did have a chance to hear the trumpeters play, which they do every hour on the hour throughout the day (and night). In any case, we walked around Market Square for the first part of the tour, learning about the various churches of the city, the cloth market and the history of Krakow and Poland. 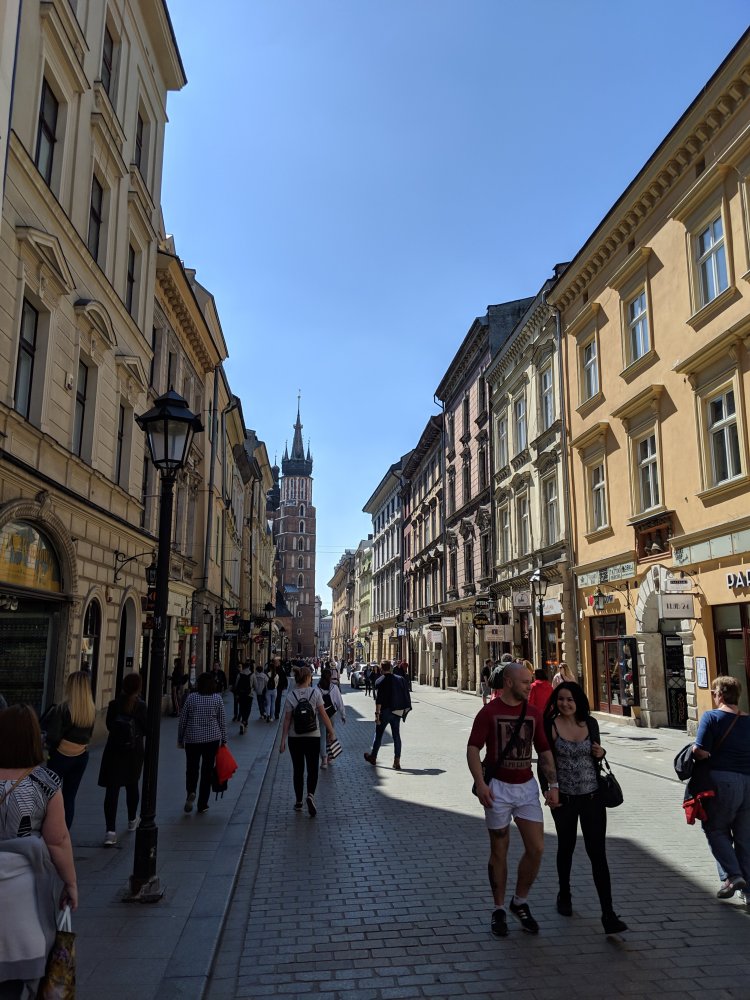 We saw the influences of the history on some of the city’s architecture and also learned of some of the tragic stories of what had happened in the city. 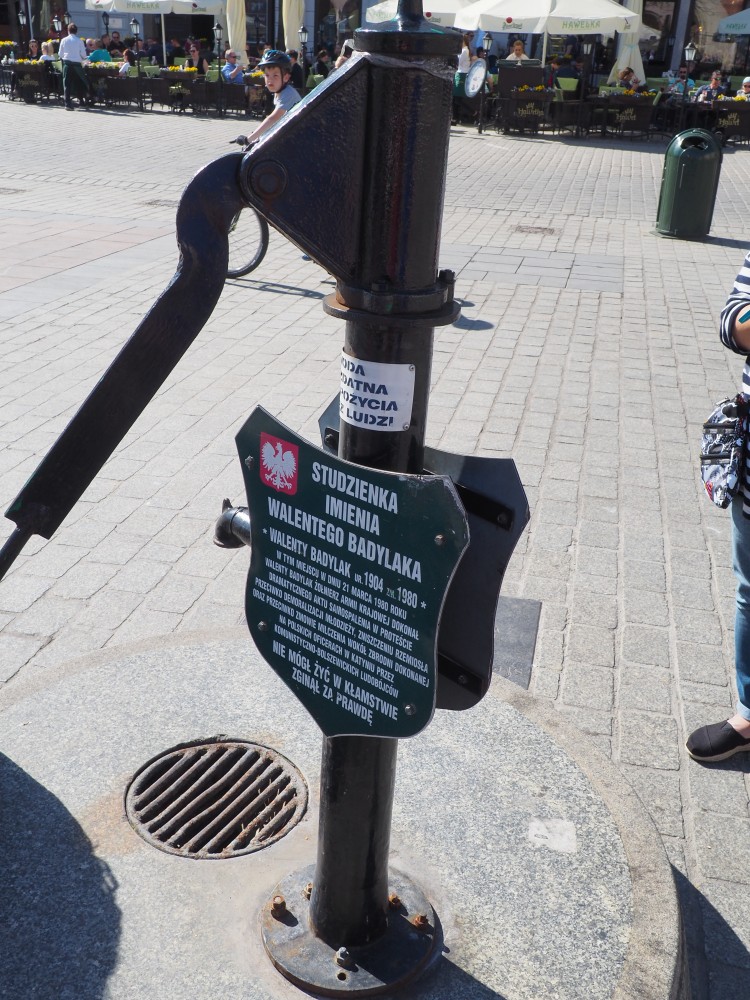 One interesting stop was in what seemed to be an unassuming corner on the edges of Market Square, where we went into an old underground politics cabaret that was frequented by students, artists, musicians and intellectuals during the communist occupation. It’s still open. Had there been more time, it would have been great to go back and see the place in action in the evening, but alas.

From there, we went to the Jagiellonian University of the city, where we learned about some of the institution’s famous attendees and rejects (including Marie Curie). There’s apparently a nice library in the university, which I would have loved to have visited. It’s somehow famous for housing Roman Polanski’s Oscar (meh) and Copernicus’s books (cooler), but it would have also been a nice addition to the theme of bookstores and libraries I’ve managed to visit on my travels. It was closed by the time we were on the tour. We went the next day to try to see it, but the hours on Google did not match the actual hours (or it closed earlier for the Easter holiday).

We walked a little further to see the statue of Nicolaus Copernicus (which is apparently the only statue of the city that was not destroyed by the Nazis when they occupied the city. We also saw the law school of Jagiellonian University, which was also the site of tragedy. 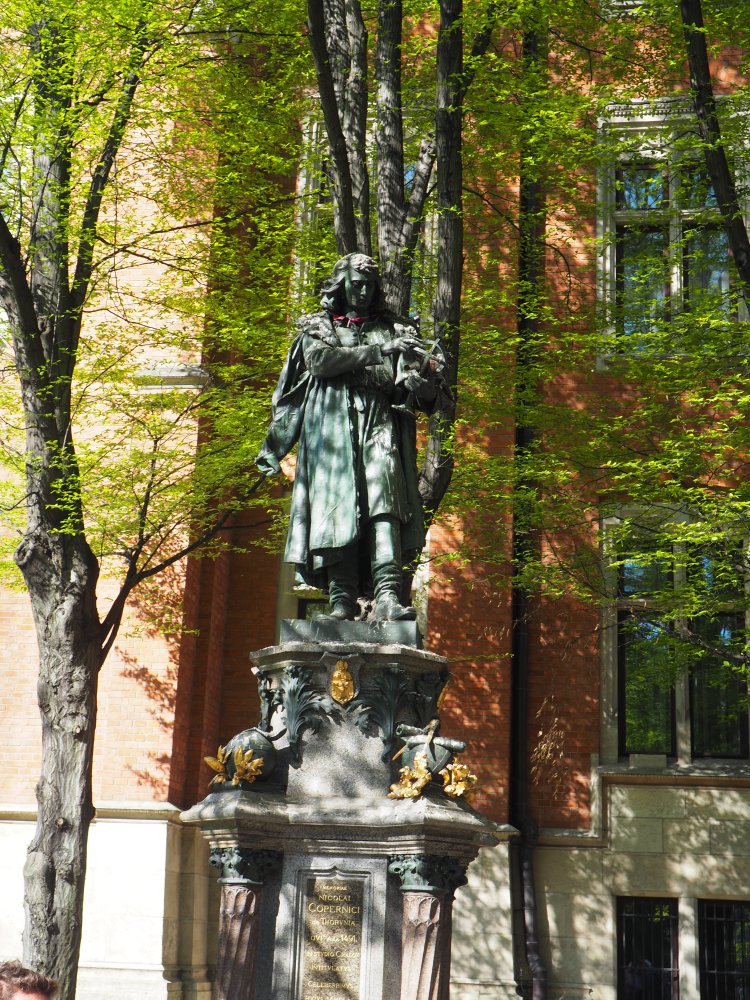 We moved from there on a slow progression towards Wawel Castle. There were stops along the way to get a more in-depth history of Pope John Paul II and how important he was to Krakow and Poland. He was not born in Krakow, but spent a considerable amount of his life there. There’s even a famous papal cake that he used to love and would have when he was in town that we tried later in the day (it was pretty good).

The walk towards Wawel Castle took us through a very pretty park. This is an important moment to maybe say that I think I may have been allergic to Krakow. It’s interesting but despite all of the green here in Switzerland, my pretty bad allergies have not been so bad this past year. They’re only ramping up now that it’s spring. My allergy problems in Krakow were ramped up to 11, or at least to the almost non-functional level I get to when I’m in San Jose. The green was nice, however.

We finally did get to Wawel Castle, which required a bit of hiking up the hill (nothing compared to Edinburgh, though, I guess). The first stop was the Wawel Cathedral, which is an interesting patchwork of architectural styles and also has a dome made of gold. Another interesting thing about the Cathedral are the large bones in front of the door. While the legend is that they’re the bones of the dragon of Krakow, they’re actually bones from various animals including a whale. 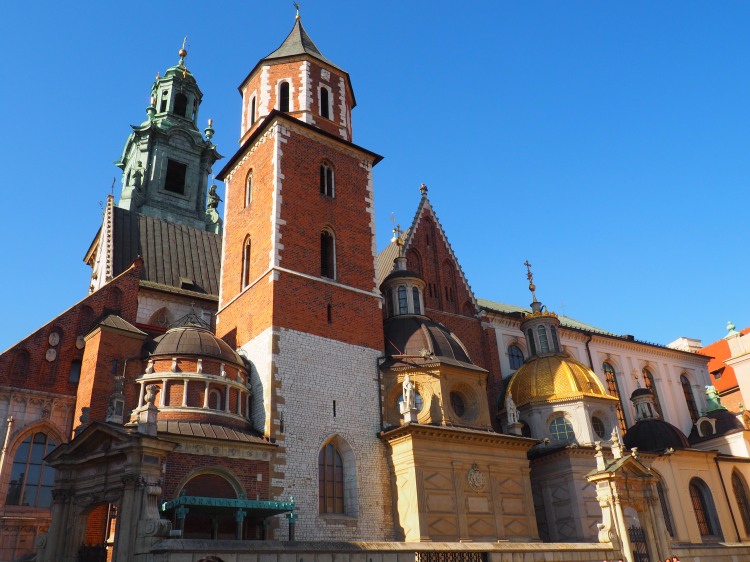 We walked around some other parts of the castle as well. We saw the former castle kitchen which was turned into Hans Frank’s residence(something they’re unable to undo now), we saw the outside of the war museum (?) and, of course, we went down to see the dragon of Krakow himself. There’s a “dragon cave” at the bottom of the hill the castle sits on. The cave itself wasn’t open, but there’s a statue of a dragon that blows fire in the air every ten(ish) minutes. It was certainly entertaining. There’s also quite a nice river view from the castle.

The tour had ended by that point, so we made our way back to the Market Square with a stop to get the papel cake along the way. It was a bit of a reverse meal situation because we started with the papel cake and followed it up with pierogi, kielbasa and some traditional Polish soups. Umma had a list from one of the students she works with of foods we had to try in Poland, so we spent a lot of our time making our way down that list.

After a lot of food, we actually took a break in the hotel while Umma went shopping. One thing I did not expect was how hot it would be in Krakow. The weather reports suggested it’d be warmer but still jeans and light jacket friendly, but it was hot. It didn’t help that our guide kept us out of the shade for most of the tour. The break out of the sun was very welcome. The rest of the day was pretty low-key, involving more food and more shopping.

Our first day kept us mostly in Old Town. While we did spend some time there the next day, our second day in Krakow was dedicated to Nowa Huta and Kazimierz (the Jewish Quarter). More on that in the next post.