With a late flight out of Brussels (made later by the fact that I learned early in the day that there would be a flight delay), I had a large part of the day to continue my explorations of Ghent. 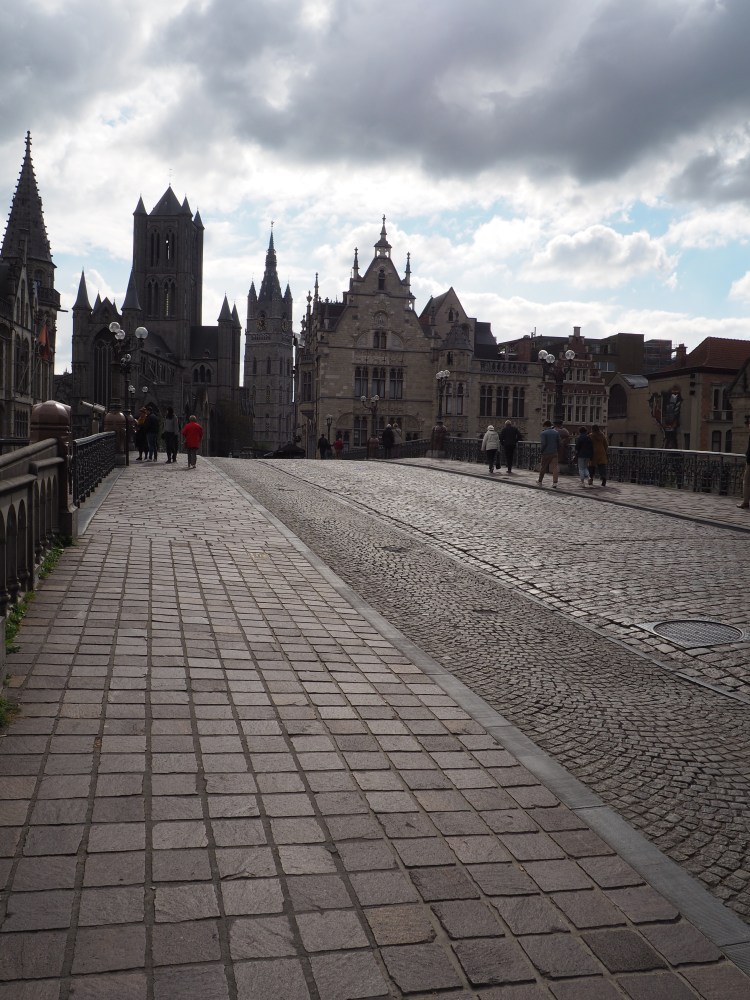 Having missed my walking  tour the day before, I made sure that I got the tour in first thing in the morning. Okay, it was at ten so it wasn’t really that early. The group met at St. Michael’s Bridge and the tour started along the Graslei waterfront. The river at that point isn’t too big, so it’s hard to imagine that this was once a bustling harbor. We learned a lot about the merchant history of the city and how a lot of the historical buildings were actually run down from years of industry and only renovated in time for the World’s Fair at the beginning of the 20th  century. Also of note was the fact that my hotel used to be the site of a brothel. 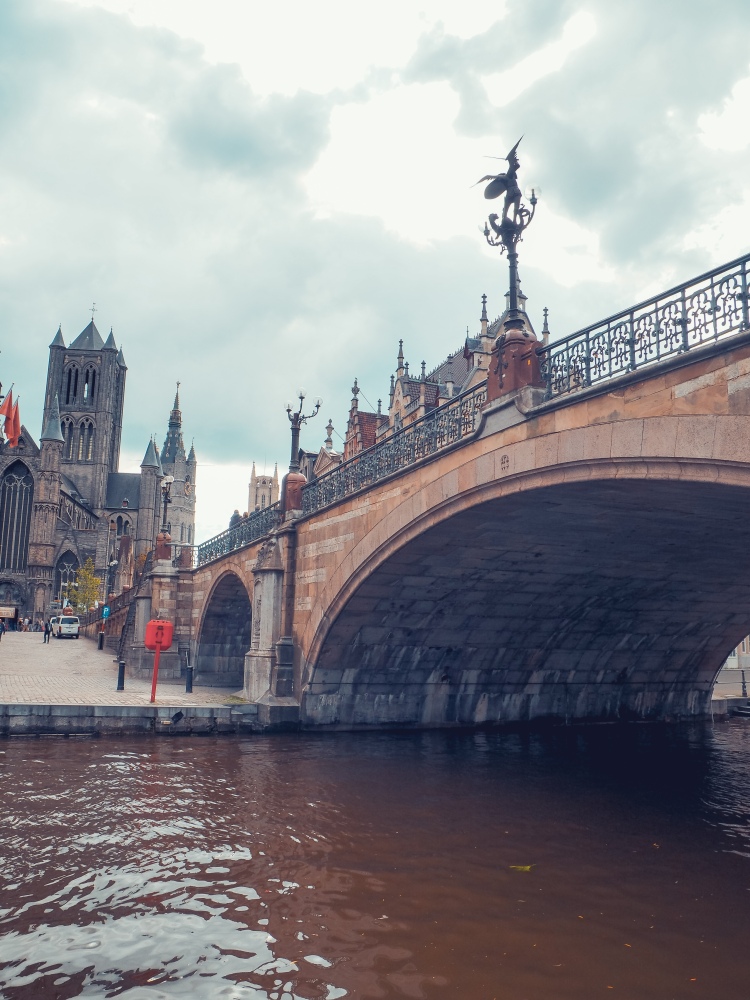 We walked by the Design Museum of Ghent. It was here that I learned that I had been walking right by a giant toilet paper roll for the past day without noticing it. According to the guide, it was the museum’s clever way to deal with a space issue when they were having problems getting the permits to expand the museum. The moved the restrooms outside in the cheeky shape of toilet paper rolls. I guess they have gotten those permits, though, so the toilet paper roll will be gone at some point.

We walked by the Gravensteen, of course, which is actually when I learned about the fact that the castle had spent some time as a factory. Like the waterfront, it was renovated in time for the World’s Fair.

We also got a glimpse of the butchers’ hall and fishers’ guide, both of which sit across the river together. Our guide pointed out that the runoff of the two buildings back in the day would have created the most awful stench, but now they’re pretty buildings to look at. The butchers’ hall is now the site of a local food market and restaurant and the fisher’s guild is where you can find the visitor’s center. 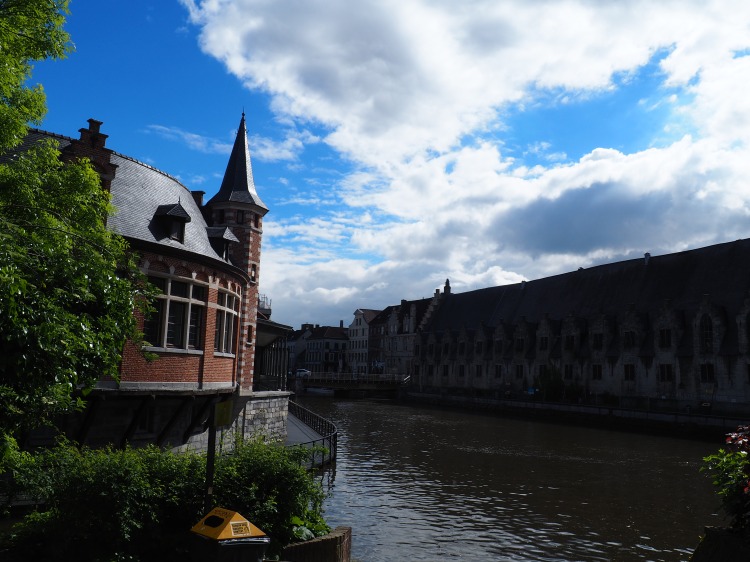 We continued along the waterfront, where we caught what both the guide of the walking tour and the boat tour I took later on were both excited to point out was the “Mannekin Pis” of Ghent (neither guide seemed impressed by the actual one in Brussels.

From there, we made our way to the Friday Market. Obviously, it was Sunday and not market day, but there were a number of musicians playing in the square. As this is the historic site of the market, we spent some time here learning about the city’s huge cloth industry, which is what brought a lot of wealth to the city for a long time.

We made our way back towards the city center, crossing first through the Graffiti Street.

We stopped at city hall, which took several centuries to build. You can see it in the fact that the architecture of the building changes as the building progresses. It’s hard to spot in the picture, but you can see a pride flag that was waving in the front of the building as it was Ghent’s Pride weekend.

It was also at this point that we learned the history of the Ghent Revolt. As punishment for treason, King Charles V had the powerful men of the city walk around the city with nooses around their necks, requiring them to either bow or use the noose. It’s why the noose is one of the symbols of the city, a symbol of resistance. 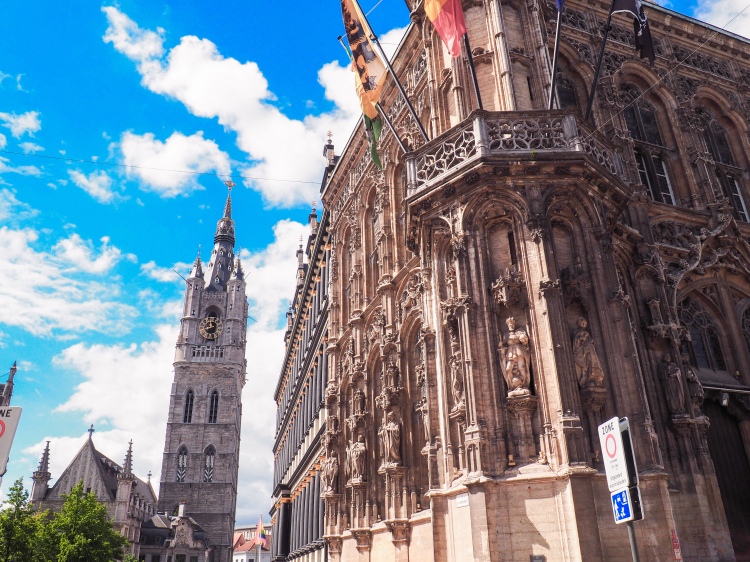 We walked towards the belfry of the tower. A dragon sits on top of the building. You can climb the belfry for a fee. I didn’t end up doing it. It plays different songs on the hour, though.

Finally, our tour ended in front of St. Bavo’s Cathedral. We ended the tour with a little bit of history of the cathedral, particularly the famous Adoration of the Mystic Lamb altarpiece, an elaborate altarpiece that was stolen for some time in World War II. One of the panels of the altarpiece was never recovered and later recreated.

After a short break and a hotel checkout, it was time to continue the Ghent tour. After the waffles and the chocolate (which I had purchased the day before and was, of course, delicious), I knew I needed to add frites to my Belgian experience. Given that I was in Belgium and all, there were quite a few places to choose from but I ended up going to a place that I saw during the tour that had the self-proclaimed best frites in town. With no grounds of comparison, I can’t say if that’s true, but I can confirm that the fries were absolutely delicious. Could have done with the sauce on the side, though, as they distracted from otherwise perfect fries.

I spent some time after that wandering the trendy neighborhood of Patershol, where I made my way around buildings and passed by trendy restaurants that I was too full from lunch to eat at. There was also a cute art show and, of course, street art to see.

My next step was equally inexplicable as I went over to the Holy Food Court. This is a former church turned into a trendy food court and nightclub. While I was still not hungry enough to eat anything, it was a nice spot to take a break from the weather that somehow manged to be hot and cold at the same time. I was halfway tempted, but not quiet hungry enough to get food from the Mexican food stall. I really miss Mexican food. 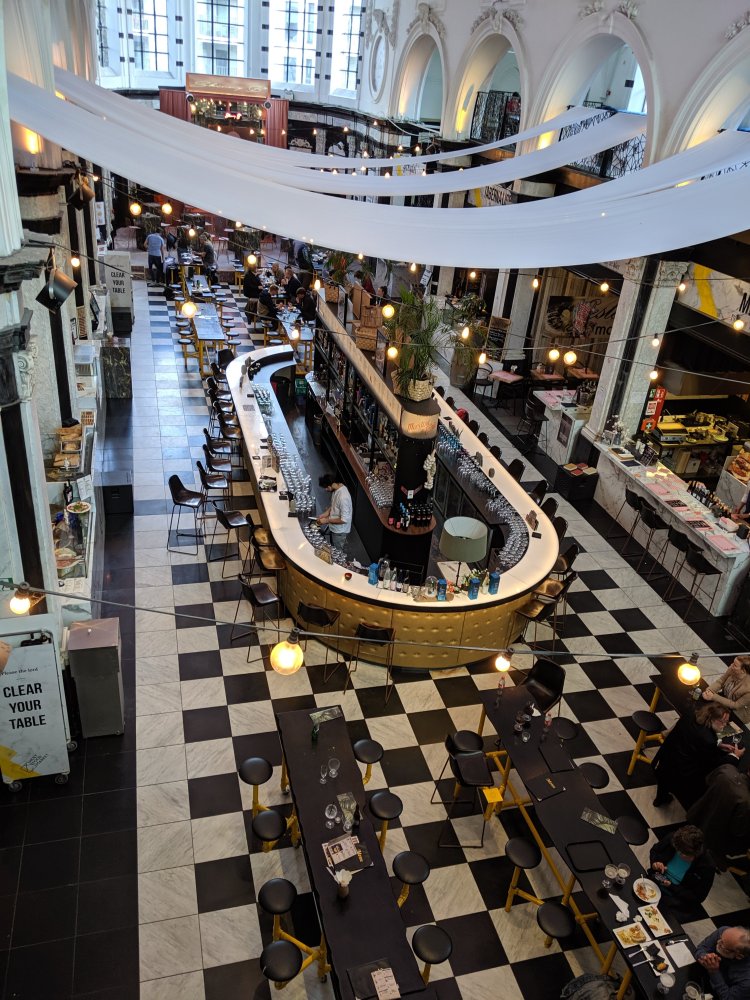 I made my way from one church back to another and paid my visit to St. Bavo’s Cathedral. Cameras aren’t permitted in a lot of the cathedral. The cathedral is pretty big and is free to visit, so is definitely worth visiting. For another four Euros, you can see the famous altarpiece as well. The space was ridiculously crowded, but it’s certainly worth seeing. An audio guide that comes with the ticket will guide you through the altarpiece. No pictures are allowed, of course. 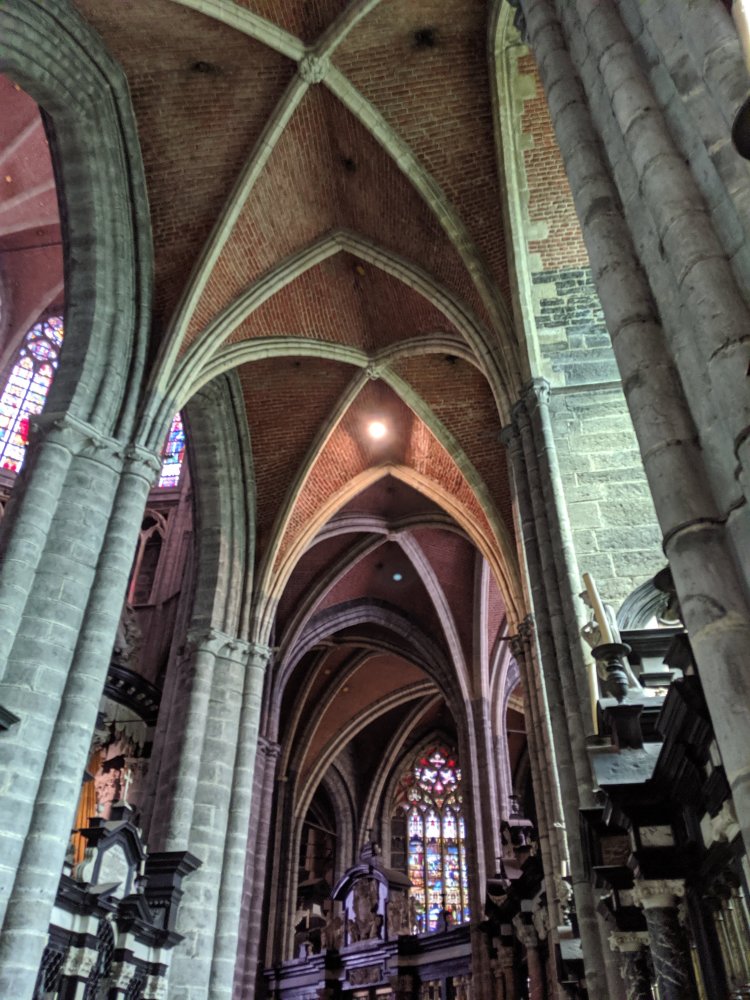 In my planned itinerary for the day, I had actually wanted to go to a psychiatry museum. Unfortunately, it was a little outside of the city center and it would have been a tight fit to make my way out there and come back in time to grab my bag and make it back to the train station. Instead, I realized that I had just enough time to take a boat tour of the rivers. 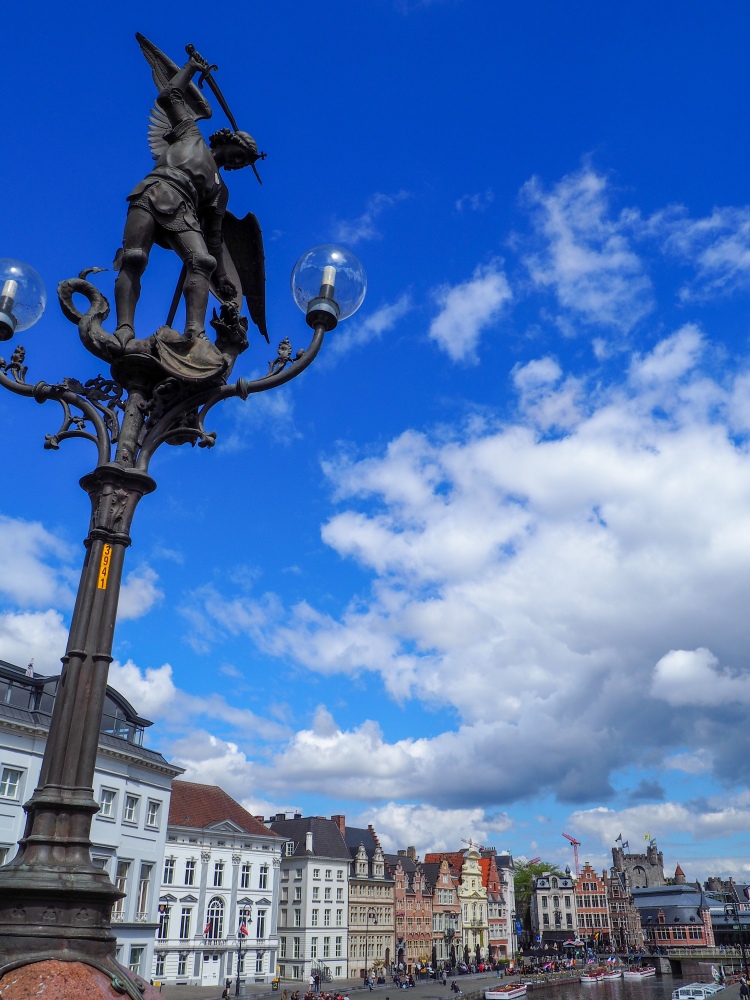 The boat tour was a nice way to get a fresh perspective of the city and get a little more history of the city. While many of the stories overlapped with the ones I heard in the morning, I have to say that our guide for the boat tour was kind of hilarious. He impressively switched between Dutch, English and Spanish with ease. 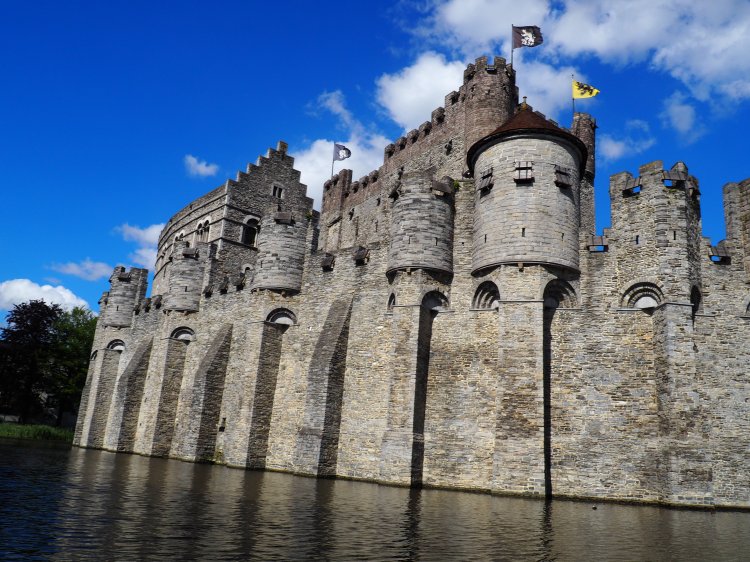 Of course, one of the big highlights of the tour was to float by a dog that was hanging out of the window of it’s home.

Unfortunately, i didn’t do a great time estimating the amount of time for the boat tour. The tour took just over 40 minutes, which I did know as that’s advertised everywhere, but my miscalculation caused me to miss the tram that would have taken me back to the train station. It was fine, though, because I was able to get a cab and made it to the train station with some time to spare. The train station was kind of cute, too.

I really liked Ghent. It wasn’t quite as pretty as Bruges, but there was a lot to do and the city made for a fun and somewhat low-key weekend (or as low key as you can get with all of the walking).

One thought on “A Weekend in Ghent (Part Two)”