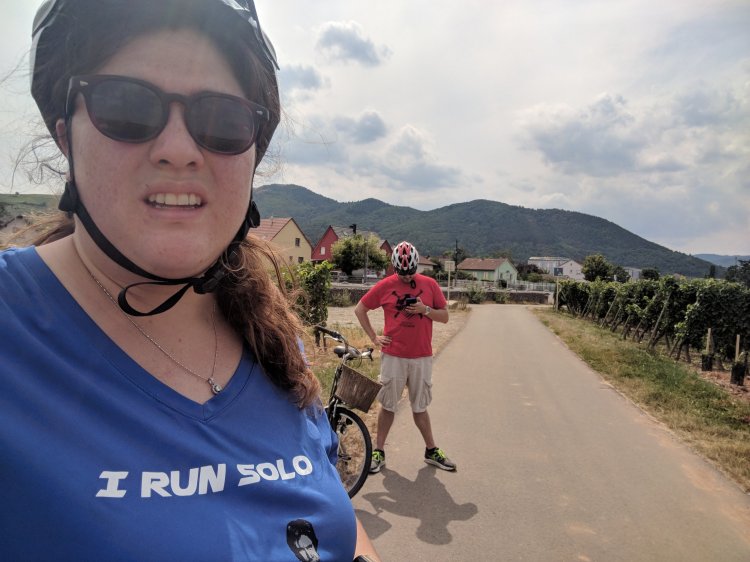 This weekend was a good reminder that you can plan all you want for a weekend and things will still not quite go as you planned. As soon as we knew that France made it to the World Cup final, we decided to scrap our initial plans and do a weekend in France. Initially, I tried to make a Lyon weekend work because I didn’t want to do two back to back Alsace weekends (we’re spoiled, I know). A last minute trip to Lyon was priced a little too high for my taste and the actual Alsace Wine Route started to sound increasingly tempting. My research eventually led me to discover that the two villages that inspired the village in Beauty and the Beast were on the Alsace Wine Route and were fairly close to each other. So, it was decided; we would spend our Sunday on the Alsace Wine Route and end the day in Colmar to watch the World Cup Final.

The problem was that the more I researched the wine route, the more difficult planning this trip on a Sunday without a car became. Buses are closed on Sundays, so we would have had to take a taxi to the nearby villages. While I could price out the taxi from Colmar to Ribeauville (which is where I wanted to start), I had no visibility into how to get back to Colmar and how much that would cost. It also didn’t make sense to go to Colmar, come back, and then return for the final. Some additional internet sleuthing led me to discover that Ant-Man and the Wasp was released in France this past weekend, a few weeks ahead of Switzerland. That’s when we decided that we’d just spend the night in Colmar, even though it’s a pretty short train ride away. We’d have the ability to take buses on Saturday, could take it easy and not have to worry about getting back early, and could finally see the new MCU movie.

It would have been a fool proof plan, except for the fact that Saturday was a national holiday in France. Yup, I completely missed the fact that July 14th is Bastille Day. I must have subconsciously known, though, because I needed to listen to the Scarlet Pimpernel cast recording on Friday night. The first clue should have been that the streets of Colmar were pretty dead quiet when we got there. Chris pointed it out, but I brushed that aside. Even when we stopped by our hotel to drop off our bags and the women at check in told us it was a holiday, it still took a few minutes for me to figure out which holiday it was. We made our way to the Tourism Office where we confirmed that, no, we couldn’t take a bus on Bastille Day.

It was fine, though, because I had planned out the taxi to Ribeauville plan and, while it wasn’t ideal, we could still make it happen. The Tourism Office even gave us a list of taxi companies we could call. This was great until we found one whole taxi at the taxi stand at the train station and he didn’t want to take us to Ribeauville. I saw an open bike shop and joked to Chris that we could bike to Ribeauville. He laughed at me and it wasn’t until we called almost every number on the taxi list and identified that all of their offices were closed that the bike tour idea started to seem more appealing.

I took a picture of one of our maps to visualize our plans. 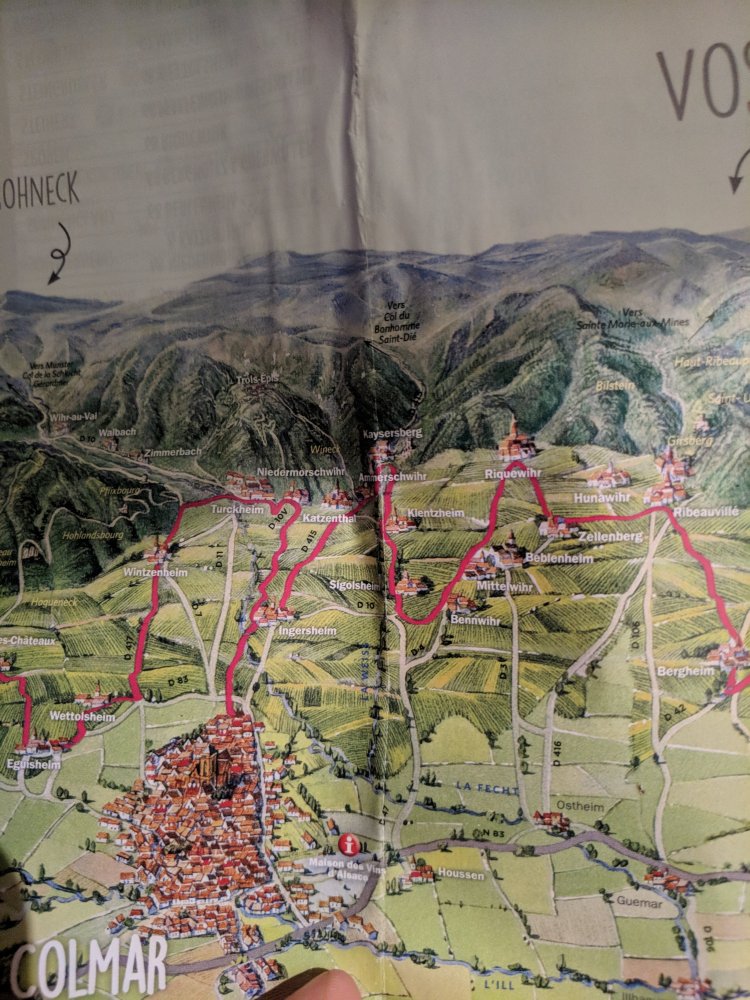 Ribeauville is about ten miles away from Colmar, but looked very, very far on the map. Riquewihr, the other town on my list, was significantly closer. The woman at the bike shop asked us if we were athletic and when we said we were okay, she said we should probably just stick to Eguisheim or maybe Turckheim. To get to Kayserberg and beyond required biking over big hills. We have a stupidly can do attitude, sometimes, though. So, when she asked us if we’d like to get to Turckheim or Eguisheim, we told her we’d go to Turckheim with the intention of going from there to Riquewihr. In retrospect, I’m not sure what we stood to benefit from keeping secrets from her, but whatever. 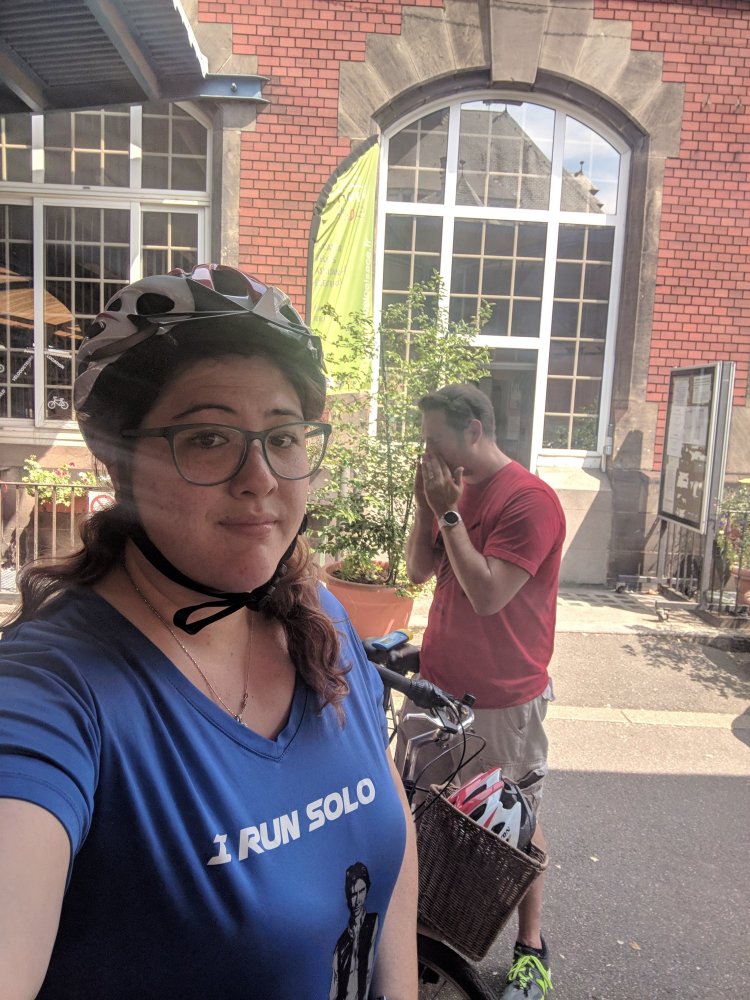 So we got our bikes, helmets and sunscreen, and made our way out to Turckheim. It’s about five to six miles from Colmar, but it felt like it took forever. We somehow missed the bike and pedestrian path, it was hot, and I am pretty sure we were biking at an uphill incline the entire time. We got to Turckheim with our water sources pretty depleted, but it was very scenic. 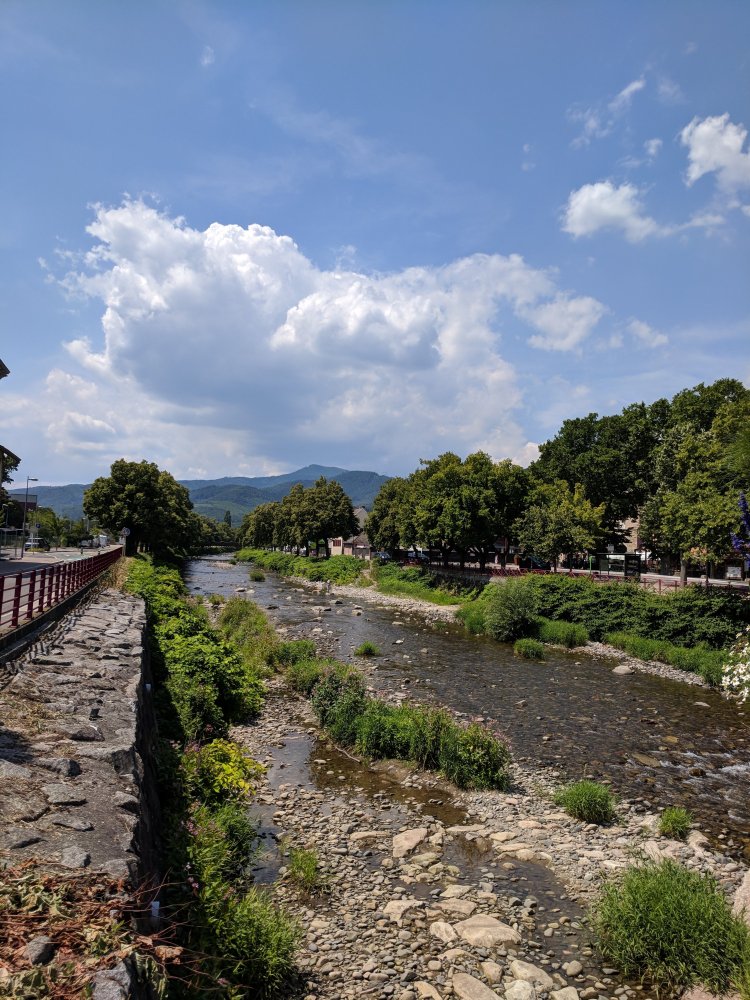 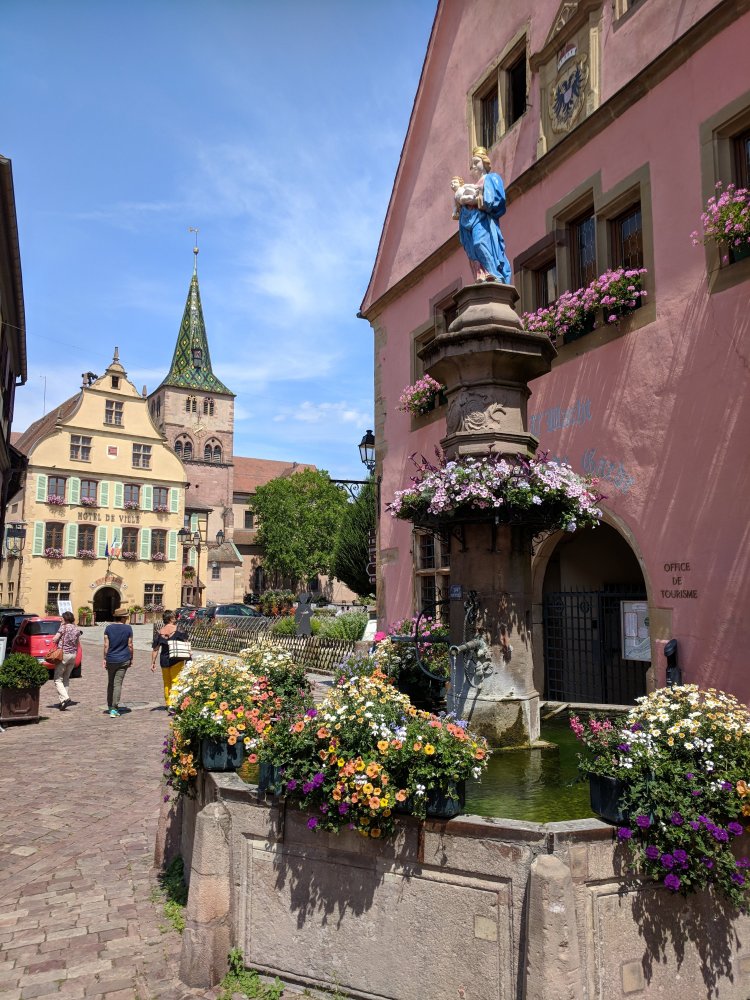 We were hungry, thirsty, and needed to get out of the sun, so we used Turckheim as our lunch stop. We found the most shaded restaurant that was actually open and set up shop for some Alsatian wine, water, and much-deserved tarte flambee. It was over lunch that we decided that our minimal biking skills and the 85 degree heat would not get us to Kayserberg, Riquewihr and certainly not Ribeauville. We decided to go back down to Eguisheim on our way back to Colmar instead.

What we didn’t find in our stop in Turckheim was a store selling water or fountains with potable water, but we had enough in the big bottle to manage. It would have been lasted significantly longer if it wasn’t the height of the afternoon, or the fact that we made at least 2 miles worth of wrong turns on the way to Eguisheim. Despite the fact that we were dehydrated and I definitely thought about stealing grapes for water at some point, I can’t complain about the view. 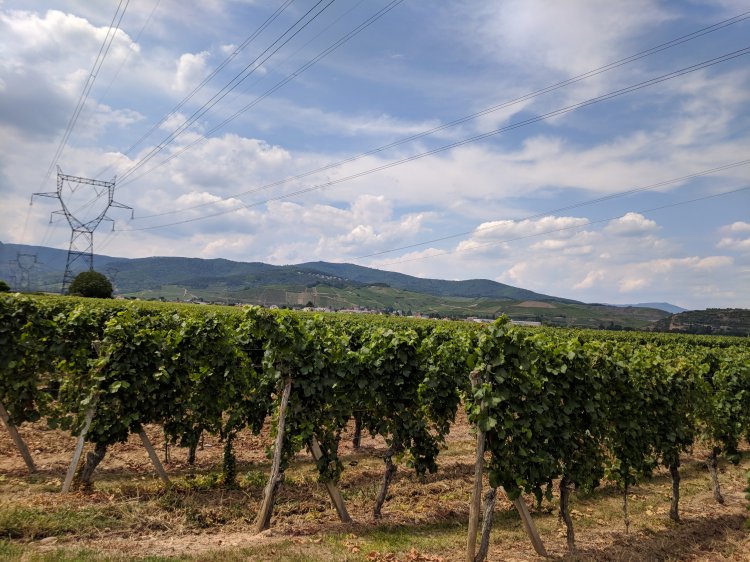 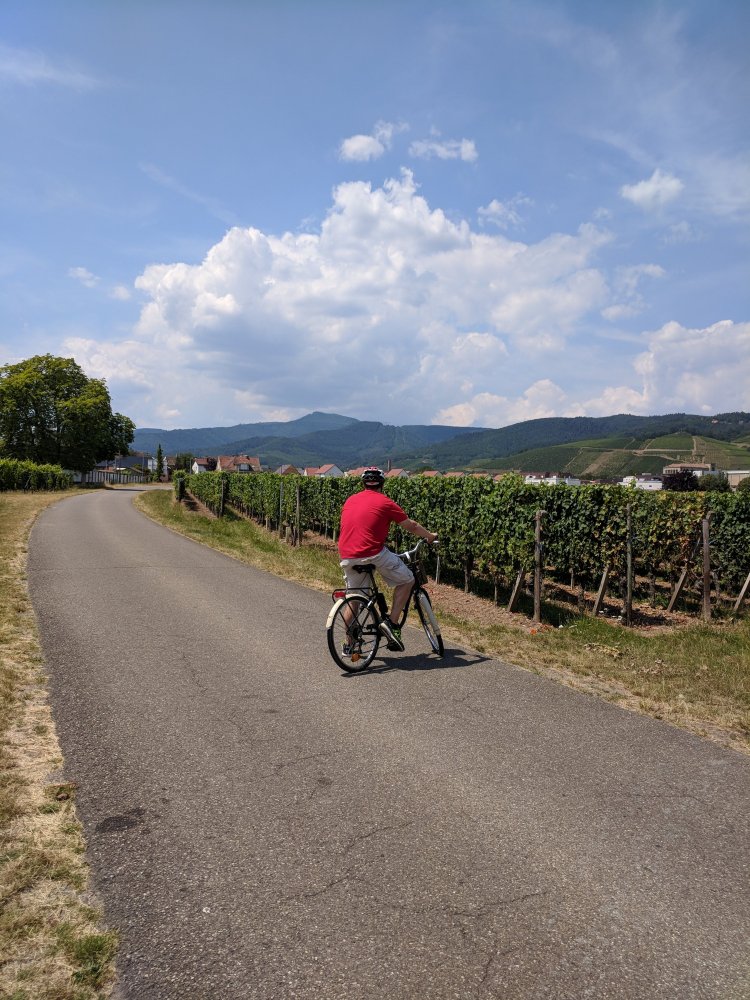 We biked through a few more villages along the way to Eguisheim. We passed a lot of closed wineries and shops that could have been selling us wine had it not been a national holiday. Once we crossed over one relatively large hill, we finally made it to Eguisheim. There was some event going on in Eguisheim, so things were a little more lively in Eguisheim than they were in Turckheim. We followed the sounds of David Bowie to some booths selling refreshments and had the most wonderful 2 euro bottles of water we could buy (plus some extra for the trip home). 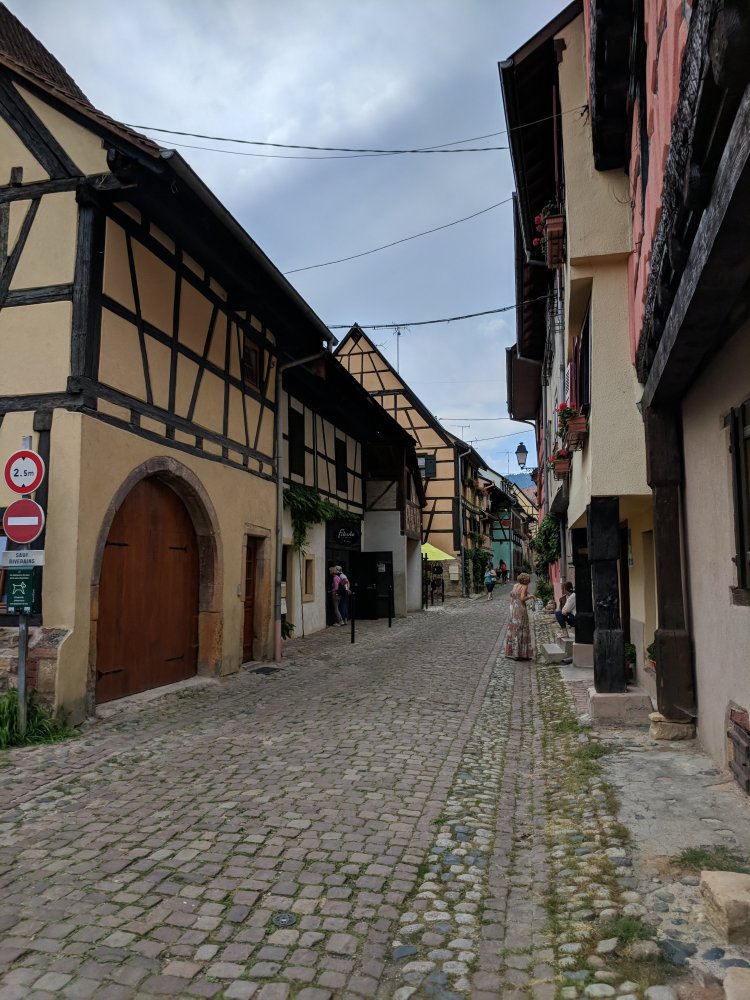 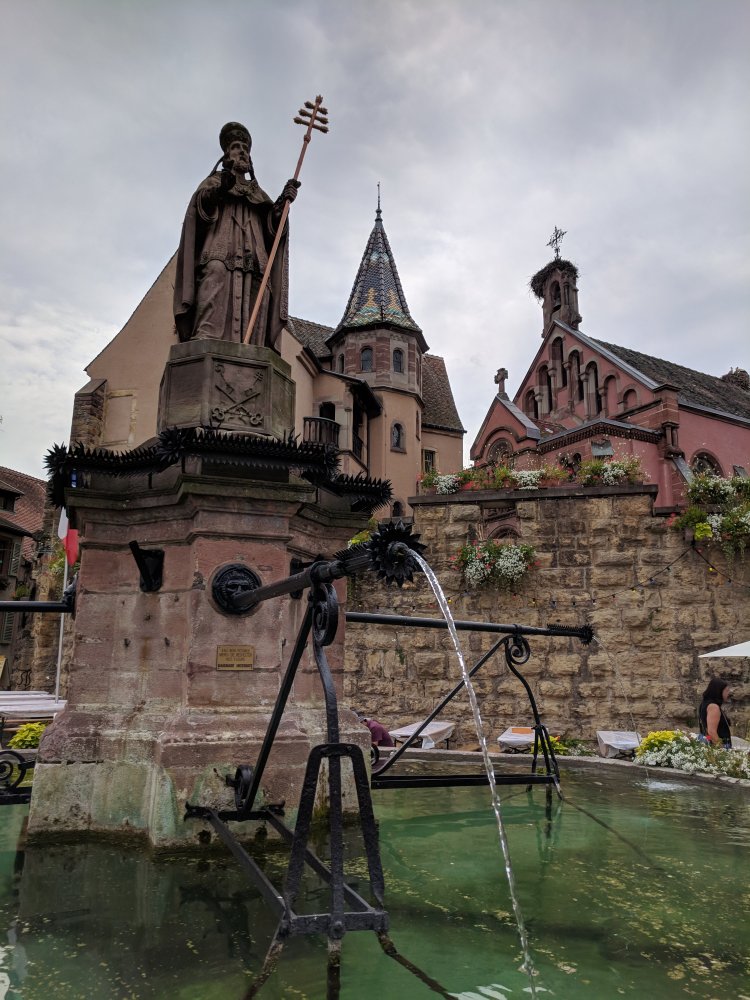 Eguisheim was charming and I would have loved to spend a little more time there, but it was four pm and there was soccer to watch. Unfortunately, despite the fact that I insisted that the third place game started at five, I was wrong and we missed the majority of the game getting back to Colmar. 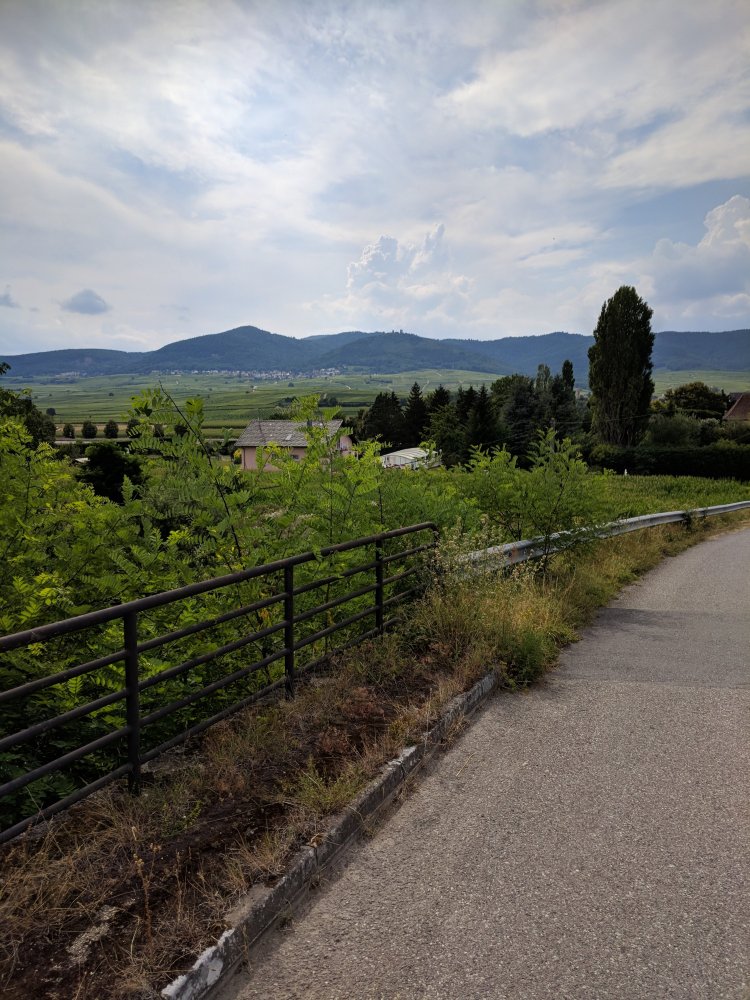 That bike ride felt like it took forever, by the way. It kind of did. At some point, with almost three miles to go, I tried to convince Chris that we should walk our bikes all the way home, but that didn’t work. We did make it, though. We thought about running through the fountains in the big park to cool down on the way to the hotel, but common sense got the better of us. Instead, we made it to the hotel with about 4 minutes left in the game and then took a much needed nap.

After, we recovered, we ventured out to explore Colmar a bit and eat dinner. We ended up eating at Wistub de la Petite Venise, a little rustic restaurant that was pretty delicious. 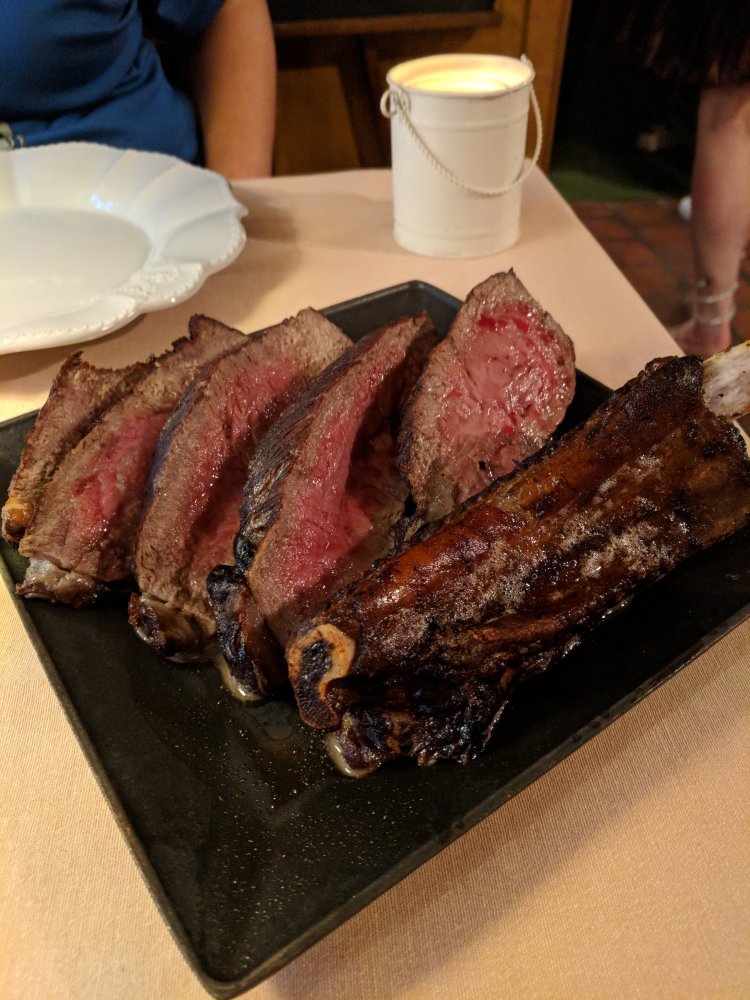 We were stuffed and wanted to stay up for the 11 pm Bastille Day festivities, so we spent a few more hours wandering Colmar to kill time. We sat ourselves down near the canal around the Musee Unterlinden to wait out the last hour before the fireworks, but decided to call it a day when we were both literally falling asleep where we were sitting.

So, despite the fact that we didn’t get to our Beauty and the Beast towns, that we didn’t make stay up to watch Bastille Day celebrations, that I had a pounding headache from all of the sun, and that we found out somewhere along the way that Ant-Man and the Wasp did not hit Comlar until Tuesday, we ended up having a pretty fun day in Alsace. I really enjoy the Alsace region. The wine is delicious, the food is good, and the towns are adorable. I’m here for quite some time, so I’m sure I’ll have more time to explore this area. Maybe I will even make it to my Beauty and the Beast towns at some point. 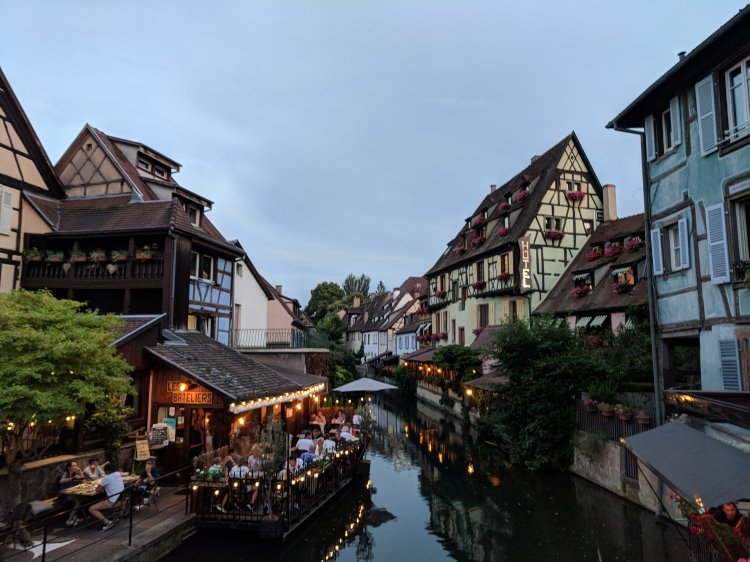