Since we’re still on our train to Zermatt, I’d figured I can kill the time by posting about the second half of our trip home last Sunday. You see, when I wrote about the Disney run on the way to Strasbourg, we really didn’t know our adventure was about to begin. Okay, it wasn’t an adventure but let’s back up to the race.

After the race, we wanted to eat at the restaurant at our hotel. Except, but the time we got home, cleaned up, and packed up our stuff, the restaurant closed until dinner. We were too tired to walk back to Disney village to get food. We considered the shuttle, but then realized that if we hustled, there was a a possiblity we could catch the earlier train.

So, we called a taxi and the combination of waiting in line to catch the taxi and waiting for the actual taxi ate up almost all the time. We did make it before the train left, but didn’t have enough time to swap tickets.

With two hours to spare at the train station and zero desire to stand or walk, we decided to find a place to sit down and actually eat a French meal. Problem was, the only sit down restaurant we could find in the train station wasn’t serving anything other than pretzels. We got pretzels, wine and a marks and Spencer sandwich we could split to hold us over until we got home to Basel and could make dinner.

Our train eventually came and the trip to Strasbourg was mostly uneventful. We stopped for an extended period of time somewhere because of the storm, but otherwise made it just in time to jump on a train on the other side of the platform directed to Basel.

Well, after forty minutes, the train still didn’t leave. At some point, they started saying something in French and a bunch of people got up and left the train. People looked panic and we were confused. The most we could muster was someone telling us that if we wanted to get to Basel, we would want to leave the train and find another one.

We took that to mean that the train we were on was broken, so we got off and went down to look at train times for the next train to Basel. As we stood there, we also heard the train we were on leave and cursed everyone. We found the next train to Basel and got on. At some point, they said something Colmar and terminus, which we understood as we were only going to be able to get to Colmar. We figured we could figure something out after that and didn’t want to do the same thing with this train that we did with the previous one.

Somewhere along the way, we found out that the rails between Colmar and Mulhouse were blocked and started panicking a little. We looked into a number of alternatives : buses (unlikely), trains to places we could get to Basel from, and a taxi.

We were a few minutes from the Colmar station when the train stopped. They said something about what was going on, but it was in French. We stayed there in the dark for probably an hour and a half, during which time we became painfully aware of 1) the broken door that kept opening and 2) the fact that I was quickly developing the cold that had been looming for the past week. We were also hungry and already ate our sandwich, so we had to dig into the pretty puny RunDisney snackbox I had in my back pack. They were missing the fake cheese, my favorite of the Run Disney pack.

After 90 minutes, the train did move, but it moved ten minutes in the opposite direction. We stopped again and waited for at least another 30 minutes. At some point, they did say something about Basel, so we were happy to hear we would be getting home that night. Of course, given that neither of us could understand French, they could have also told us we were definitely not going to make it to Mulhouse, St Louis or Basel that night.

We eventually did make it to Colmar and were elated when the train left the station. It meant that the tracks must have been cleared and we could make it home. We got to Basel around 11:30 and made it home just before midnight, 3.5 hours after we were supposed to get home.

Having made it through that series of delays, I guess it could have been worse. We made it home that night and didn’t have to spring for a taxi to either Basel or St Louis from Colmar. I’m pretty sure that the Colmar terminus situation was the reason someone suggested we get off the train. We probably would have had to cab from Colmar or find some other solution if we had stayed on the train because I would imagine the tracks would have still been blocked. So, I guess that worked out. Also, it certainly did not top the hell that was taking Frontier Airlines back from Orlando after the Dark Side race. That was truly miserable. 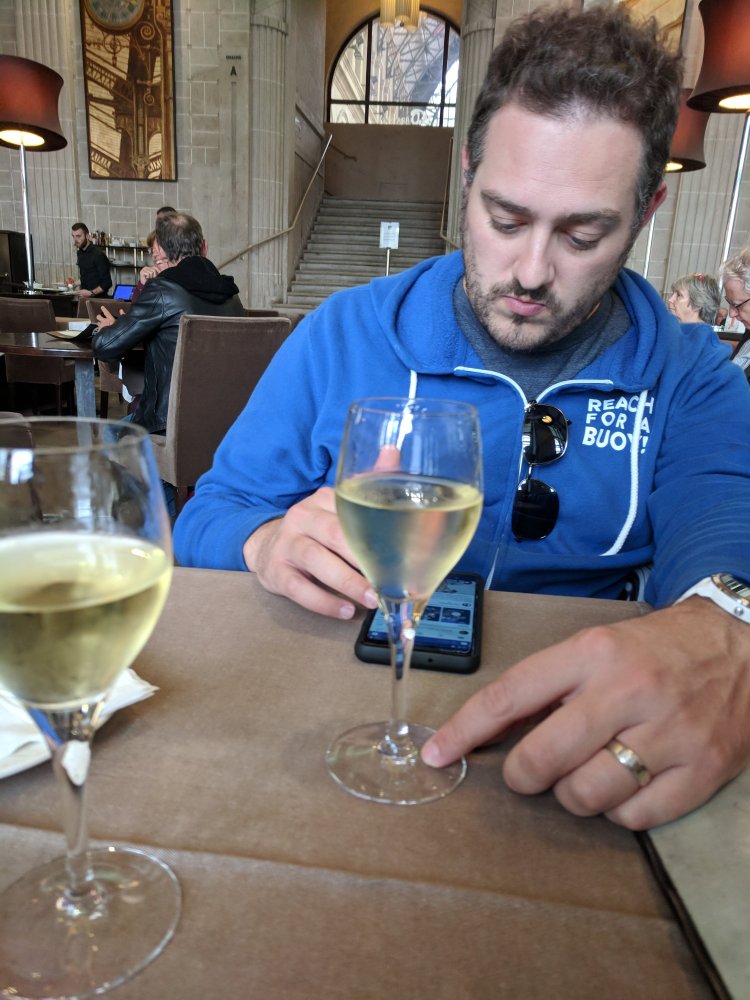