I love Munich. Granted, my memories of Munich from ten years ago mostly consist of the Narnia-like hostel/campground we stayed at, where we ate delicious sausages, played Machiavelli with strangers and sat around a campfire every night. We were such stereotypical backpackers. 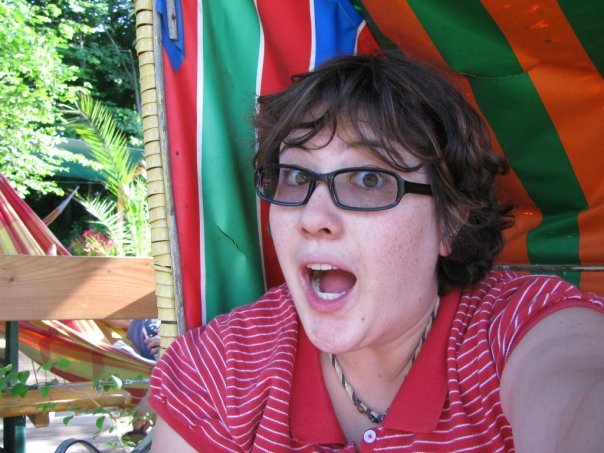 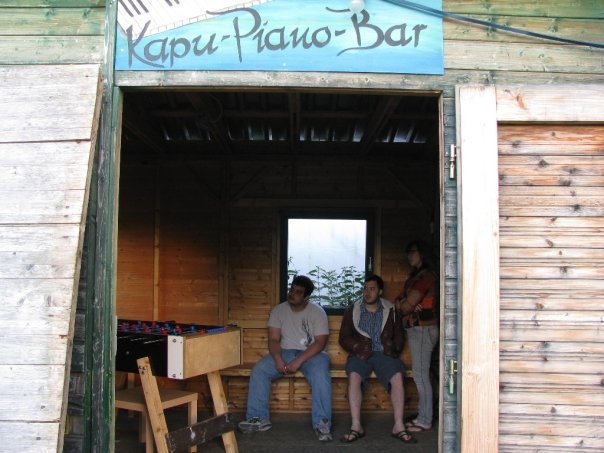 I mean, look those young fools.

Needless to say, despite the fact that we are apparently now too old to stay at the Tent (also, Chris would never stay there), I was very excited to come back. This time around, our tour Munich was planned around Oktoberfest, but we still managed to get a surprising amount of things done. Because hotels were incredibly expensive for the weekend, we stayed at a hotel near the airport. It meant that getting to and from town was a bit of an adventure each day. It wasn’t that hard to get there; it just took a while.
Saturday 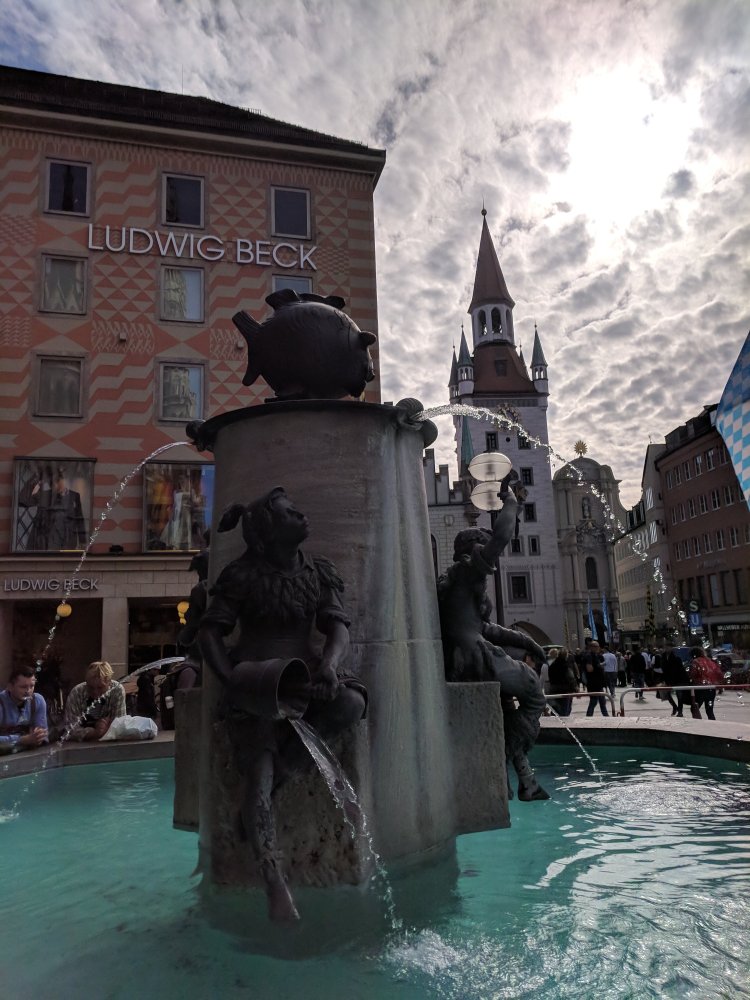 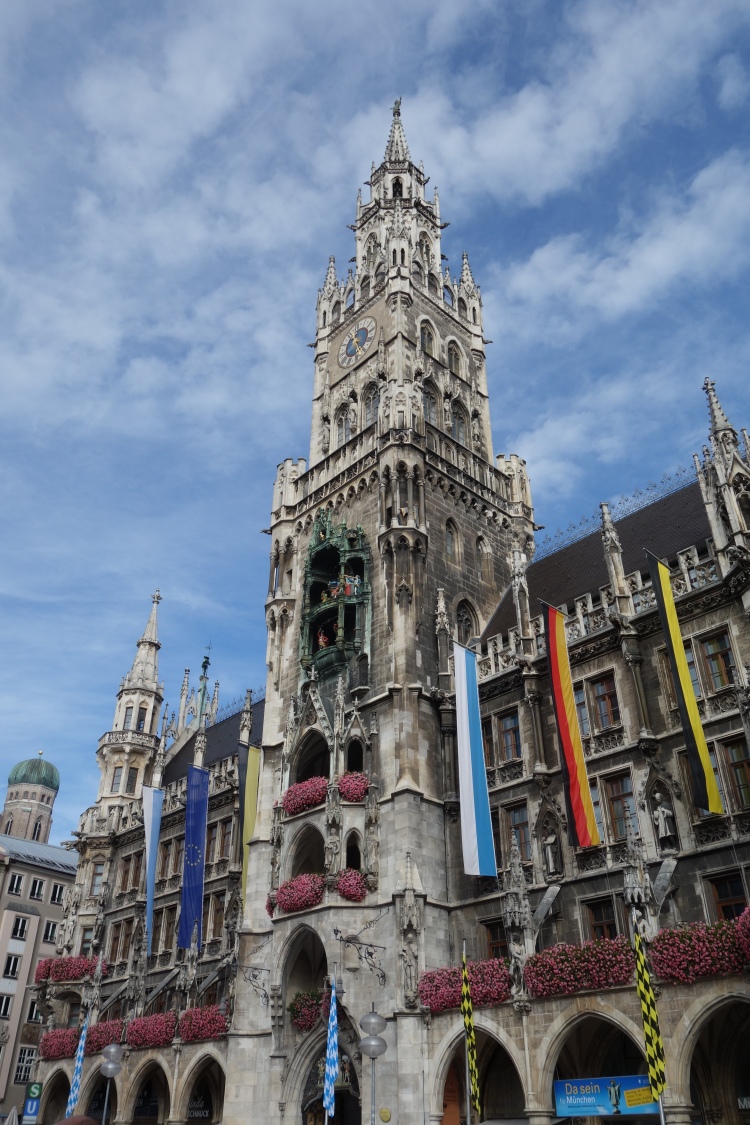 We spent a lot of our time on Saturday at and around Marienplatz, which is the main town square with town hall. We got there just after 11 and managed to just miss the glockenspiel performance. We walked around the square and then made our way to the Frauenkirche (the big church that looks like onions). We didn’t go into the church for whatever reason, but we did make sure that we got a picture of Chris next to the model of Munich that really upset Andrew for whatever reason ten years ago. 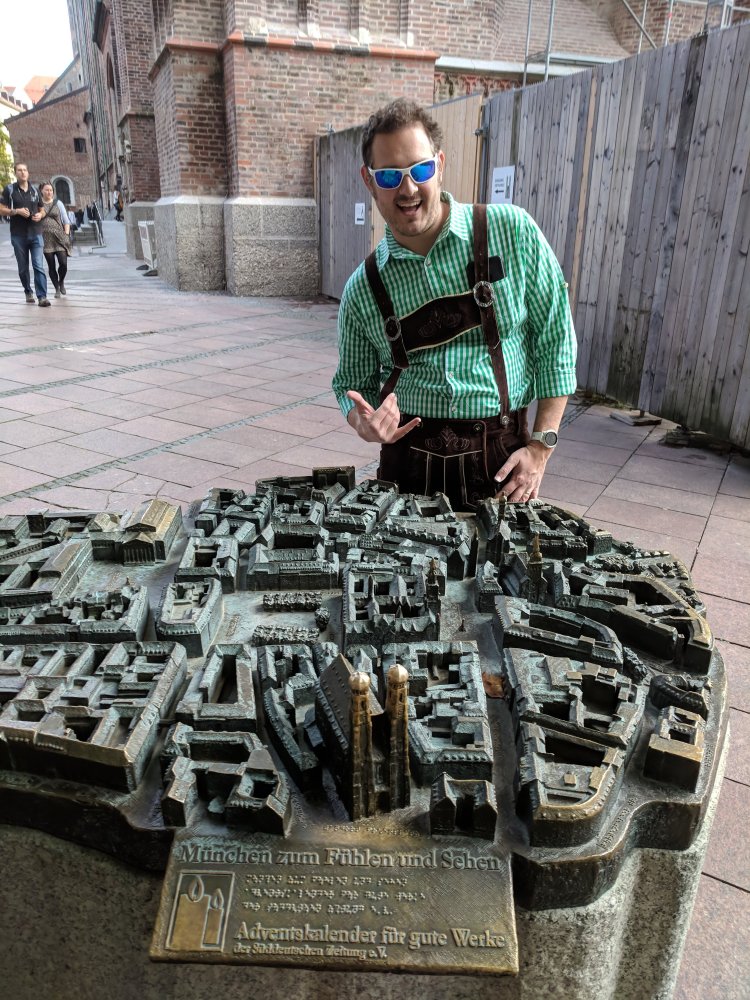 From there, we walked to a small square a few minutes away, where there is an ongoing memorial to Michael Jackson. 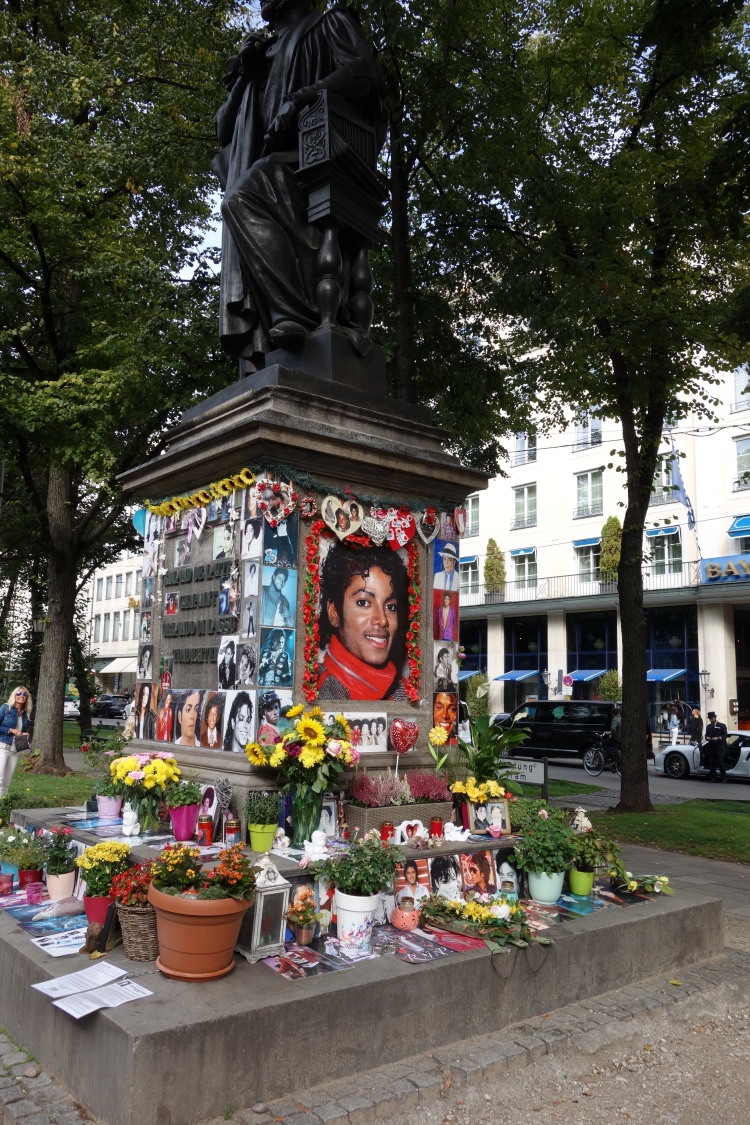 We got back with a few minutes left before noon, so we and many other people waited for the glockenspiel performance to start. As the clock struck, it seemed a little Black Mirror-esque to see many people staring at a clock with their phones up, especially since it took a few minutes for it to start.

Other than Oktoberfest, we saw a few other churches and stayed primarily around the old town for the day. The first was St. Michaels Church, which Chris was excited to find out was a Jesuit Church.

The second was a church, Asam church, which we saw much later in the day that was very small but incredibly ornate.

Beyond that and our failed attempt at doing a walking tour in the late afternoon, our Saturday was more centered around Oktoberfest and recovery from Oktoberfest than anything else.
Sunday

Our Sunday was met with some failures. Despite the fact that we had what we thought was a pretty early start, we didn’t get into the city center until after the 10:45 walking tour we wanted to join left. Our second option was to spend a foodie day and eat our way around the Viktualien Market. Unfortunately, it was a Sunday and most of the food stalls were closed. We had some weisswurst for breakfast and briefly considered, but ultimately did not go to Eataly Munich before deciding to just do our own walking tour of Munich.

On our way out from Marienplatz, we passed by a small street, which is one of the few things that I did remember from our tour ten years ago and had wanted to find again. It’s a small and unassuming street with a large bronze streak down the middle. The street was a path that people would take so that they would avoid having to give to salute Nazi guards. It is a simple yet powerful homage to resistance. 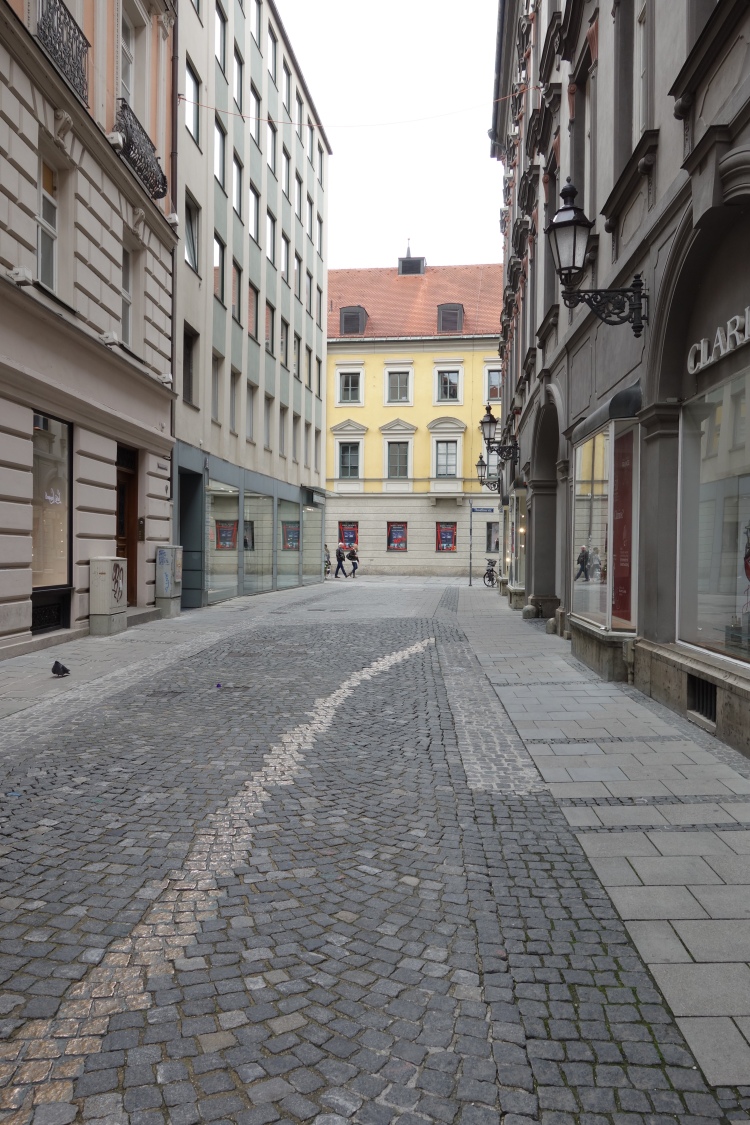 From there, we walked to Feldherrnhalle and made our way to the nearby Hofgarten. 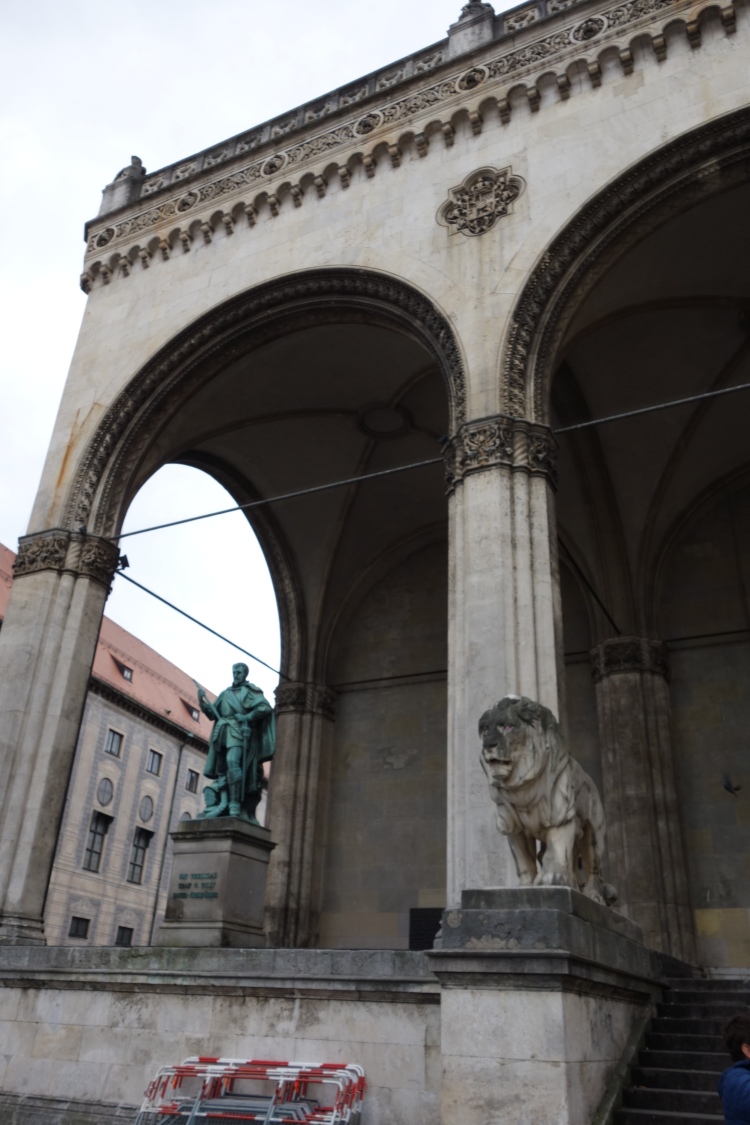 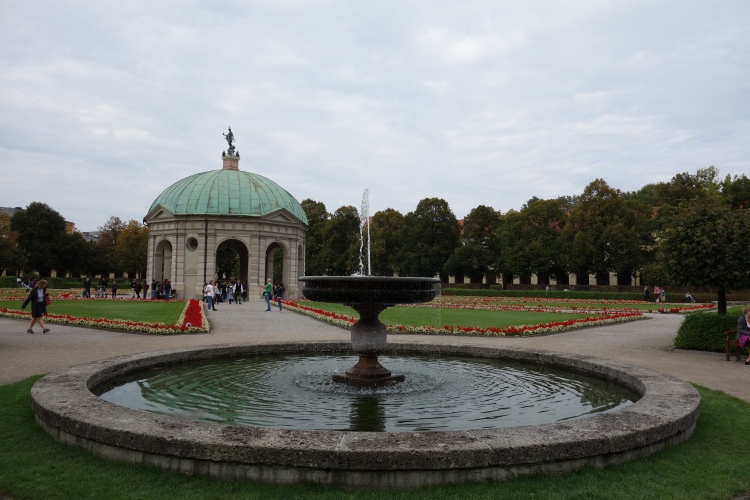 From there, we walked over to Englischer Garten, which is a pretty large park in the middle of Munich. We walked around in the middle of the park a little bit. From my Rick Steves marathoning, I correctly thought that this is the park that people surf in and we eventually did find the surfers. This marks the second time since I got here to Europe that I’ve seen people surf in places that aren’t the ocean.

We made our way back out of the park and to Siegestor, which is a large triumphal arc, and through what must have been a university area of town before Chris got us to an Alice in Wonderland-themed ice cream shop, which we ate before our lunch. 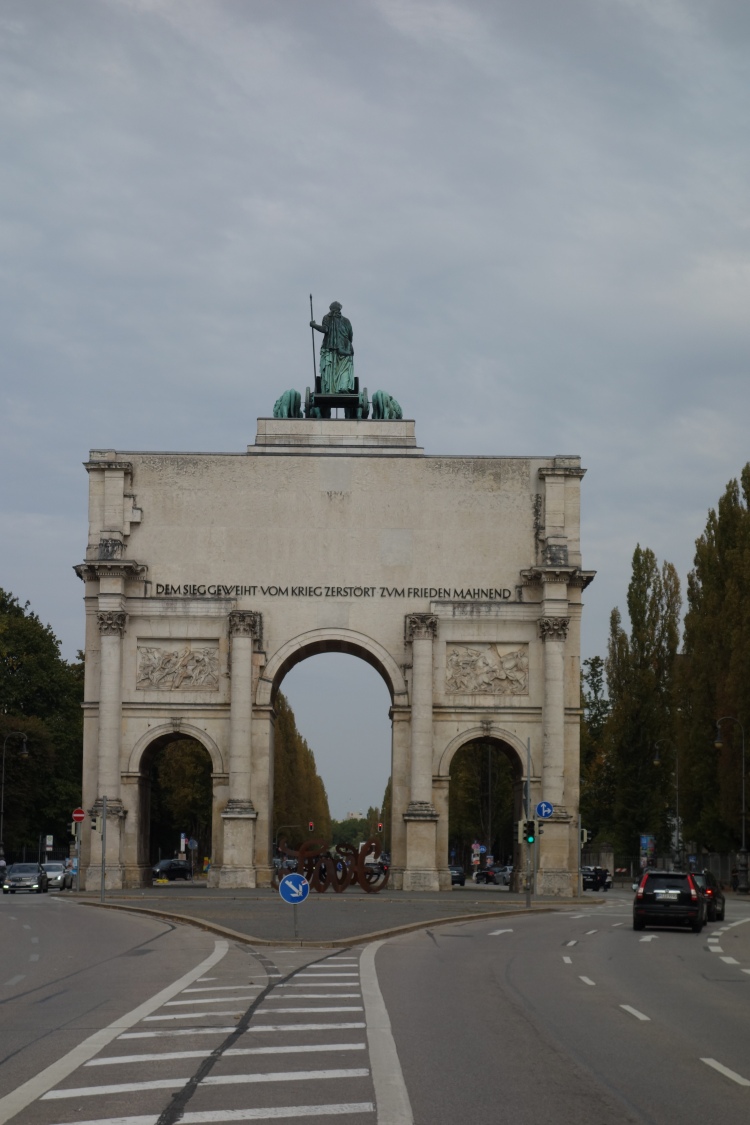 We had lunch reservations, so we could actually have a non-Oktoberfest Bavarian meal. Our reservations were at Ratskeller Munich, a historic beer hall under town hall. The food was hearty and delicious. I had the pancake soup and spicy sauces (that weren’t ~too~ spicy, but were still delicious). Chris had potato soup and absolutely delicious pork knuckles. We ate well and were pretty full the rest of the day. 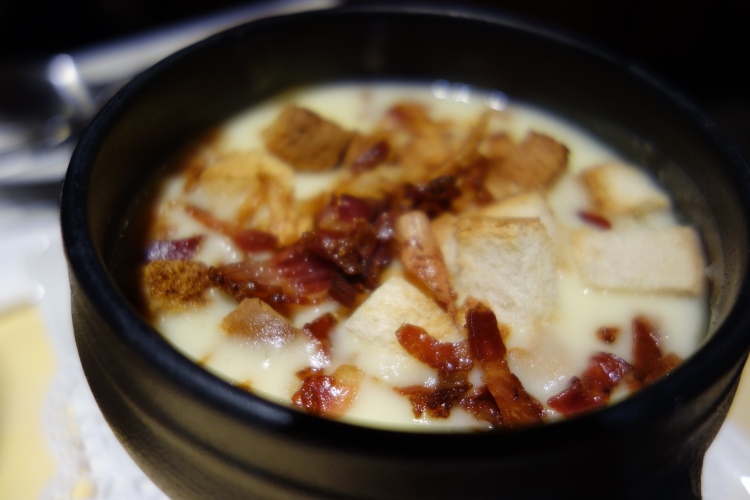 We left for the airport from there, stopping first at our hotel to pick up our luggage. We somehow made it to the airport with a lot of time to spare. It was enough time for me to convince Chris that we definitely needed a second Oktoberfest beer stein and then to win a free glass of sparkling wine. Overall, it was a fun trip to Munich.