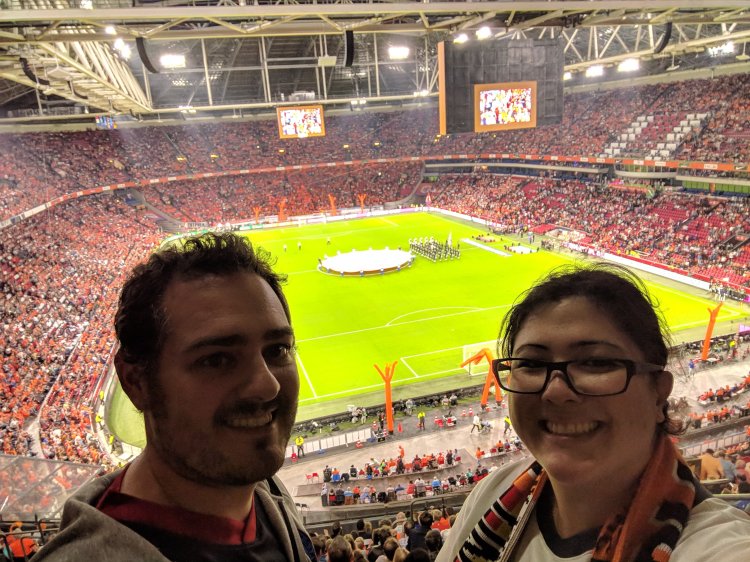 We knew that we would be throwing some soccer trips into the mix this year. I suppose you could call our Alsace weekend back in July the first one, but now we can actually say that we’ve seen a European soccer game live. About a month before Chris got here, he asked if we wanted to see one of the fall national team games. The European national teams are doing the UEFA Nation’s League right now and after going through match schedules, decided on a weekend in Amsterdam to watch the historic Netherlands v. Germany rivalry. Beyond the fact that this is one of the big rivalries, we figured it would also be cool to see two national teams that are trying to rebuild after pretty big blows (The Netherlands, for those of you not paying attention, also did not qualify for this year’s World Cup). Also, the logistics for this game were the easiest.

The other big thing we needed to figure out was what to wear. We were behind a goal post, which may have meant we were seated in a fan zone. Which one, we didn’t know, so we felt we should dress neutral. For us, that meant wearing our US jerseys. I did briefly think about wearing my South Korea MNT shirt, but thought there may still be hard feelings on the German side.

Getting to the stadium was an adventure. It’s not that hard to get to the Ajax stadium from the city center as it’s along the Metro line. The train, however, was jam-packed with people in Netherlands orange singing soccer chants. Chris was the happiest I’ve ever seen him on a crowded and hot subway train.

Finding the entrance was another challenge. The stadium is enormous and it took us a while to find the right entrance. I will say, even if it’s not my team, it was refreshing to go to a home game for a national team and not be vastly outnumbered by fans of the away team. It’s not something to take for granted, especially in the games against their USMNT’s own rival.

One line, one very invasive pat down, and several escalators later, we did eventually make it to our seats with about ten minutes to spare before the game. As suspected, we were near the German supporters section, but weren’t in it. Other than scattered Germany jersey’s, we were otherwise in a sea of orange and probably didn’t need to stay that neutral in the end. 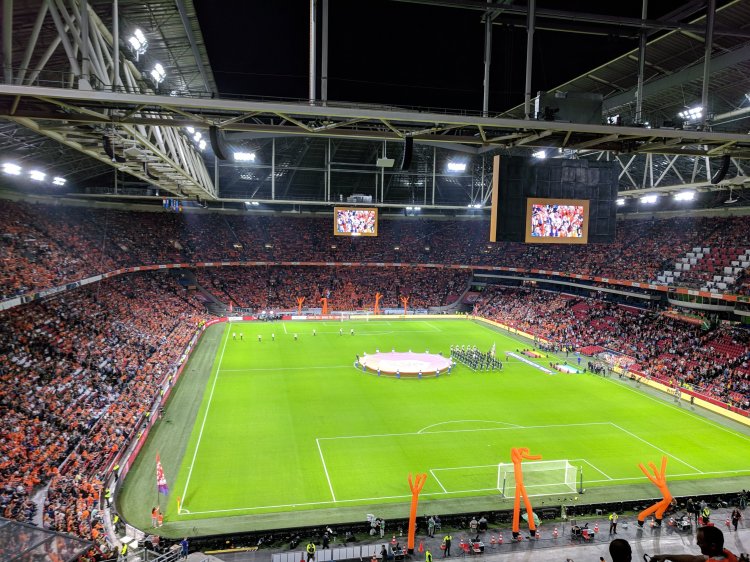 The game was a lot of fun. The energy was exhilarating. We sat next to some pretty die hard Dutch fans and spent most of half time talking to them about various topics (mostly about the rivalry and the US). The Netherlands got a goal about two thirds into the first half and then scored two more towards the end of the game. We almost missed both because we had considered leaving at the 80th minute to avoid the crowds exiting the stadium. Glad we didn’t. Chris said it’s the first time the team beat Germany in 15 years, which is kind of crazy. The CraleaBump is real.

Getting out of the stadium and back to the city center was also entertaining. There were so many people lined up to get tickets that they ended up just opening up the gates and letting people through. There was also a BTS concert getting out around that time, so the trains were incredibly crowded. Once we got back, we grabbed some late night frites and went back to the hotel.

There will be more soccer trips in the works. Chris had to rearrange his travel schedule a little, which means we may have slightly different game options available to us. At some point, we’ll also do FC Basel.