When my plans to visit Milan over my birthday weekend fell through, I shifted my travel plans to Bellinzona in the Italian canton of Switzerland. Bellinzona is the capital of Ticino and is known for the three castles that are in the city (all of which were named UNESCO World Heritage sites). Not only would this let me keep my opportunity to test how poor my Italian speaking has gotten, but I realized on the train over that it was my first time since getting here to Switzerland last year that I was visiting one of the non German-speaking cantons (although I have been before).

If I had hustled enough, I probably could have done Bellinzona as day trip, but I didn’t feel like spending most of my day on the train with a late night return to Basel. Also, I thought it’d be a great idea to try to see a Tibetan bridge in the mountain. So, I instead made it an overnight trip, which allowed me to leave an hour later in the morning and take things slowly.
Saturday Market

I got into Bellinzona late morning and after putting my stuff down in the hotel, I ventured down to the Saturday market. 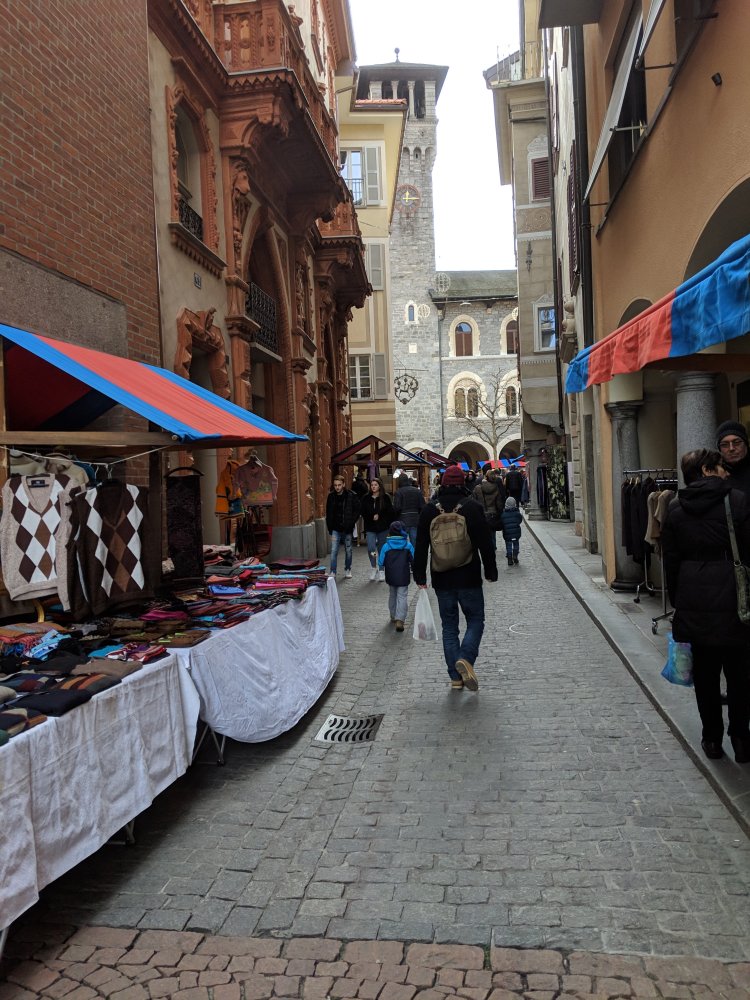 The market is relatively large and while it did have wide variety of food, it also had a number of stands selling clothes and crafts. I also used that time to try food from a couple of stands for a (somewhat) on the go lunch.

I made my way towards Monte Carasso from the market, but we talked about that one already, so I’ll spare you the details again.
Castelgrande

I got back to town with some day light to spare, so I decided to see the first of the three castles. Castelgrande is the closest to town and, therefore, the easiest to get to. It was also the big stronghold of the city and has a long fortified wall. There used to be buildings in the castle grounds, but now you can apparently do an escape game in the castle. It’s totally something I would have done to if 1) it wasn’t closed when I got there and 2) I had people to do the escape game with. I guess there’s the language thing. I don’t know how far my Italian could get me in an hour.

Instead, I spent my time walking around the castle grounds. The museums and everything were closed, but the castle grounds were open until much later than I would have expected. It worked out well. I got to explore the castle in the late afternoon, which meant it was relatively quiet. I walked the castle walls and a long stretch of the fortified wall until I hit a point where a couple who had found a quiet hideaway on the wall started glaring at the tourist with a camera interrupting their romantic moment.

I spent the rest of the night recuperating from the impromptu hike, which was interrupted by a break to get a much-deserved and delicious pizza for dinner. 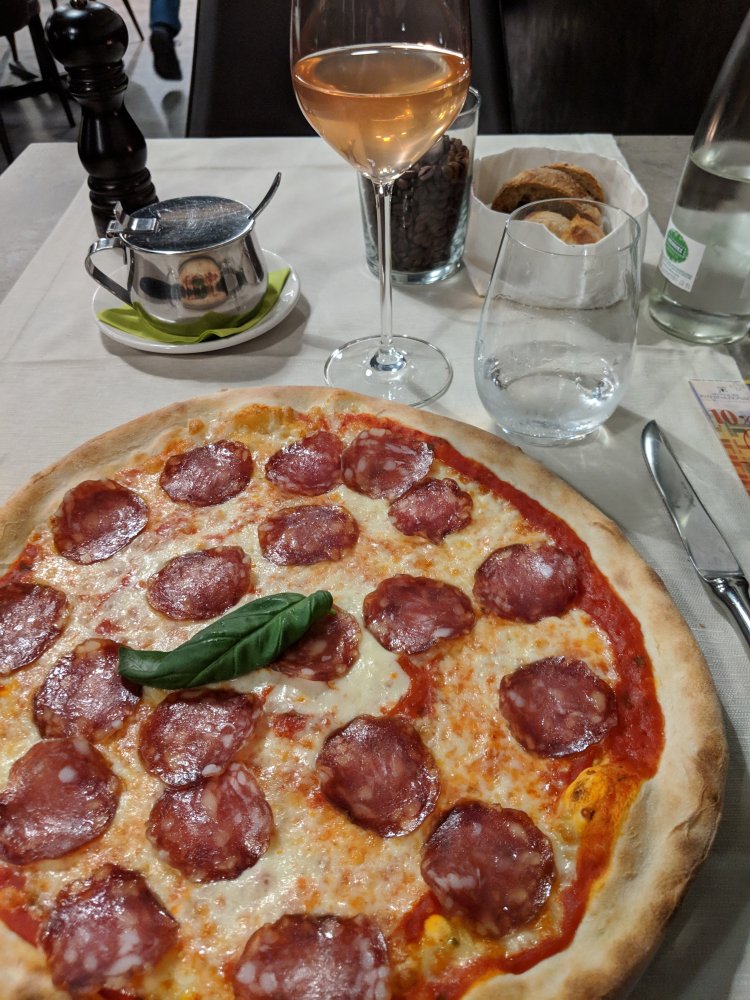 I woke up early the next morning to complete my castle tour of Bellinzona. I grabbed food and made it outside in time for the bus that would take me up to Sasso Carbaro. This castle was the farthest from the city center and sat just outside of the city walls. You can see it throughout the city, but I didn’t quite understand how far the castle actually was until I sat in that bus as it wound up and up the mountain and the rest of the city got increasingly smaller.

I took a long look up the rocky pathway up to the castle and knew that the castle would not take me two hours, even with the intimidating trips up and down the hill. I then thought of the narrow and windy road I’d have to walk down (and dodge cars) to get to Montebello. Between that and the fact that I could still acutely feel the repercussions of an impromptu hike from the day before, I knew exactly what I needed to do. I snapped my quick photo of the castle and jumped back on the bus. The bus driver thought this was funny. We bonded on the way back down as I found someone who was patient with my bad Italian. He even said I spoke the language very well (take that ye naysayers).

The bus driver brought me down to Montebello, which was the second castle on my tour of the day. The best thing about exploring an area in its off-season is that you sometimes get things all to yourself, which was the case at Montebello. I’m sure there were probably people working there, but as far as I knew, it was just me and history. Unfortunately, this also meant that the museum was closed, which was fine. I walked around the walls and castle grounds. 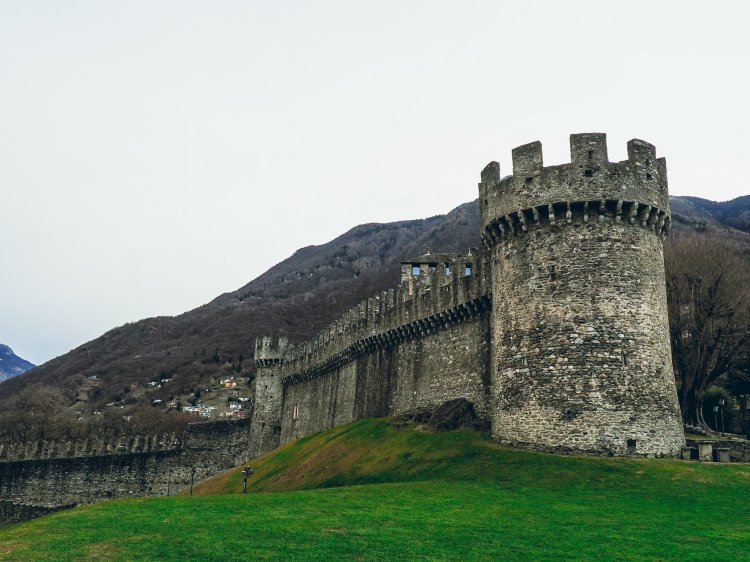 It was also incredibly windy that morning. Much more so than the day before.

Eventually, other people started trickling in and I wasn’t alone. It wasn’t the worst thing in the world as it never got anywhere remotely near crowded. I figured that the problem that plagued me up in Sasso Carbaro would have also been an issue at Montebello, but I figured out after some people watching that there was an easy path straight to the city center if I followed the castle walls. The trip down was nothing compared to the day before and I was happy to not have to battle cars for space on the road.

As it was Sunday, the town was also incredibly quiet as I approached. There were few people walking along the streets and it was nowhere near as bustling as it had been during the Saturday market the day before.

I had planned to leave Bellinzona relatively early so I could make it back to Basel with time to get some stuff done for the day, so I knew I was going to leave relatively early. I still also had to get my stuff from the hotel. Having skipped the full experience at the first castle gave me enough time to make another stop by Castelgrande. I didn’t think the museums would be open and they weren’t.

After some exploration of the castle grounds, I made my way back to the hotel, packed up my stuff and made it out of town. There were ups and downs to the weekend (quite literally), but I’d say it was a fun weekend overall. 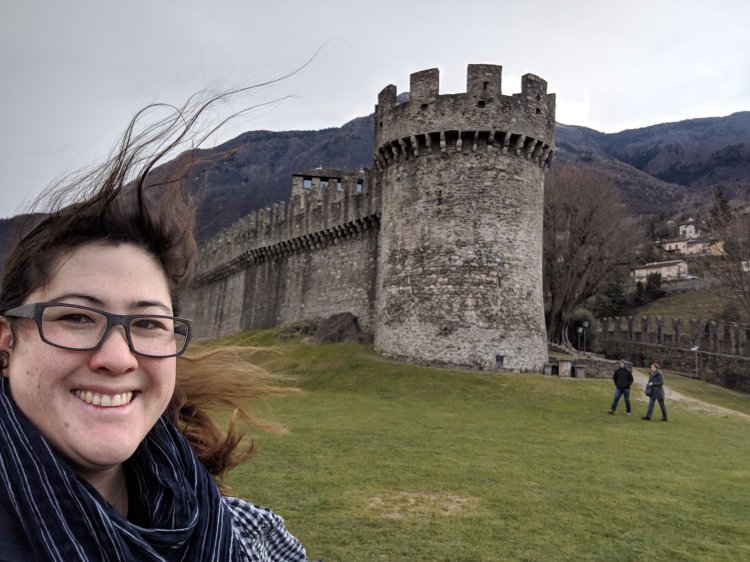 5 thoughts on “Castle Hopping in Bellinzona”