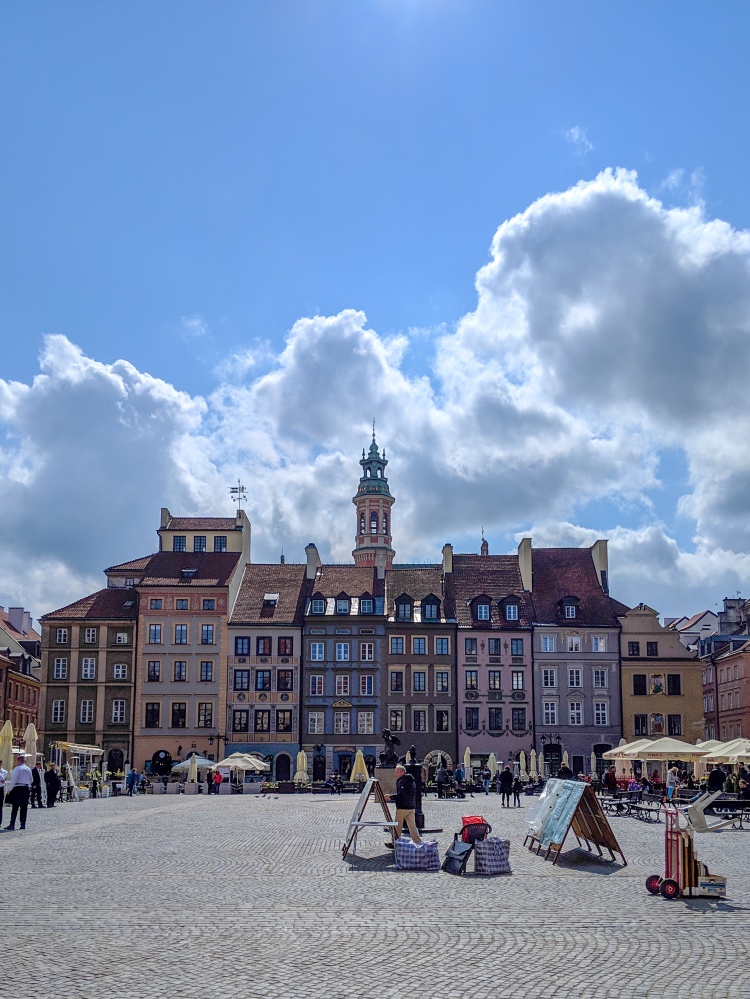 Our last full day in Poland was spent (mostly) in Warsaw. Unfortunately, however, we did not get to Warsaw until the afternoon. Our choices were between a 6 am train, an 11 am train, or several trains in between that would take anywhere between 4-6 hours. So we went with the 11 am.

We got into Warsaw right before 2 and the first thing we saw when we stepped out of the train station was the Palace of Science and Culture, an enormous high-rise building that is a relic of the Soviet occupation of the country. I knew it was a big building, but it was huge. 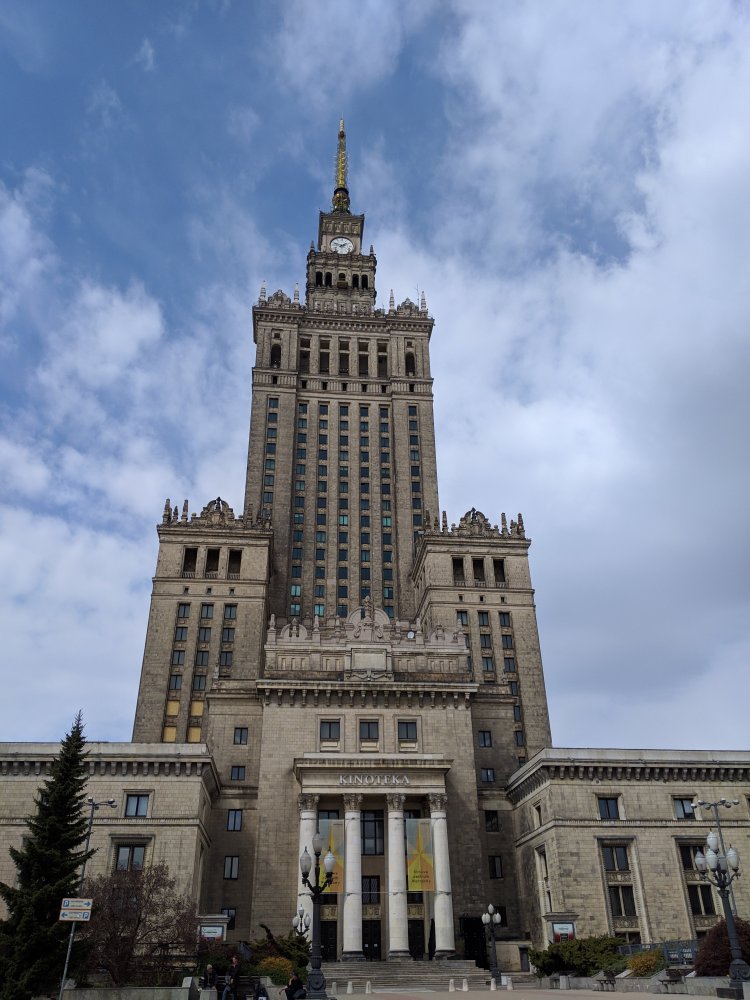 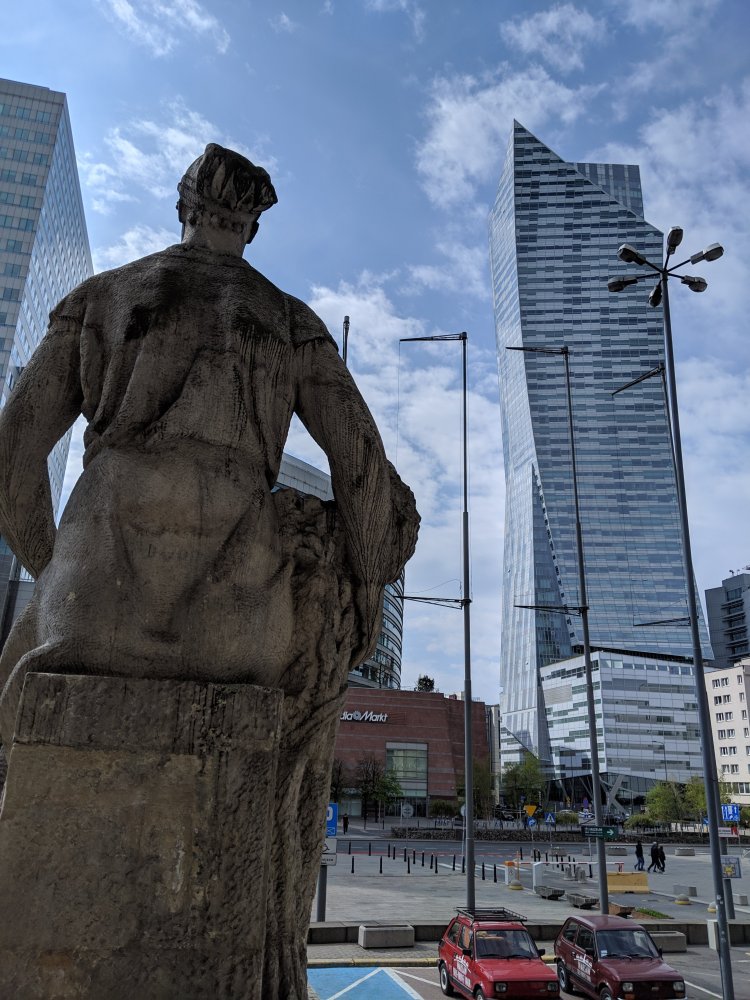 We walked around the building a little, but it was Easter and, therefore, not open. Typically, there’s an elevator that can take you to a viewing platform from the building, but everything looked pretty closed and we had to get to Old Town to check into our hotel. We probably also spent too much time walking around the building because we barely missed the bus that would get us there.

Once we got on the bus, the trip to Old Town was pretty straightforward. It was more or less a straight trip to Old Town and then it was a matter of navigating the streets of Old Town from there. We checked in, dropped off our bags and realized that it was 3 pm and we were terribly hungry. We sat down at a restaurant that was good, albeit a little slow. The downside was that we missed the walking tour I was going to get us on, which meant that I had to make our own walking tour. 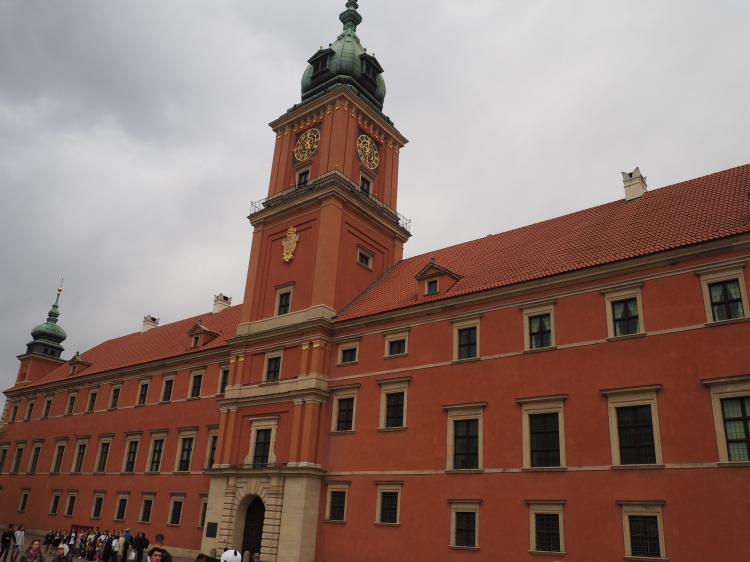 Well, we started by looking at the Royal Castle and then getting distracted at an amber store for longer than we should have been. Once we got the amber store out of our system, then we started on our tour of Warsaw. This took us back to the main square and Sigismund’s Column (named after one of Poland’s kings) before we left Old Town. 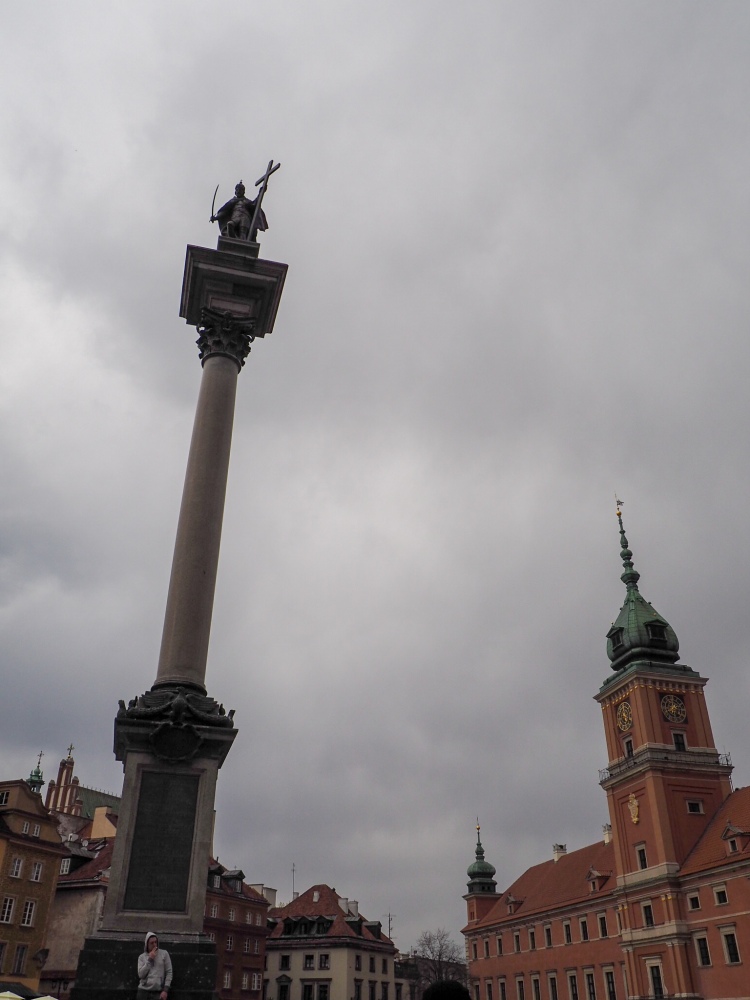 We didn’t make it that far down the street before we got distracted by the prospect of ice cream and chimney cake (what I was more excited about). We got cinnamon and it was perfect. 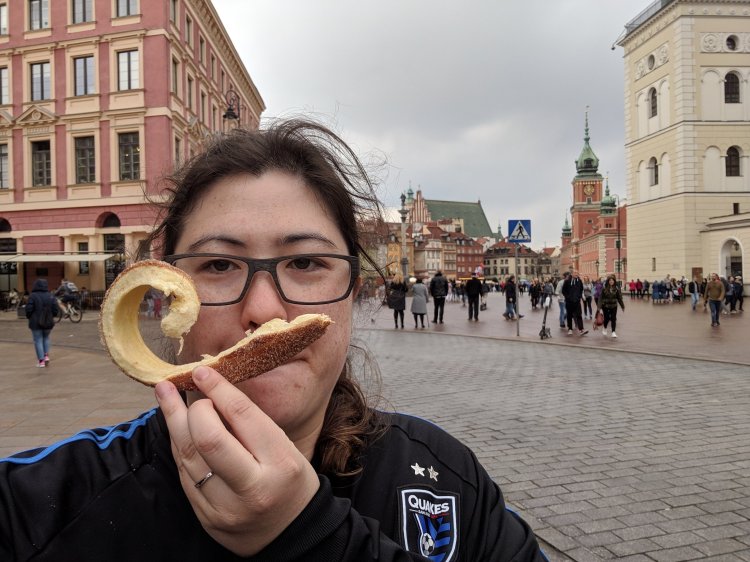 As we continued down the street, we passed by a statue and park dedicated to Adam Mickiewicz, a very famous Polish poet. The Presidential Palace was right around the corner. 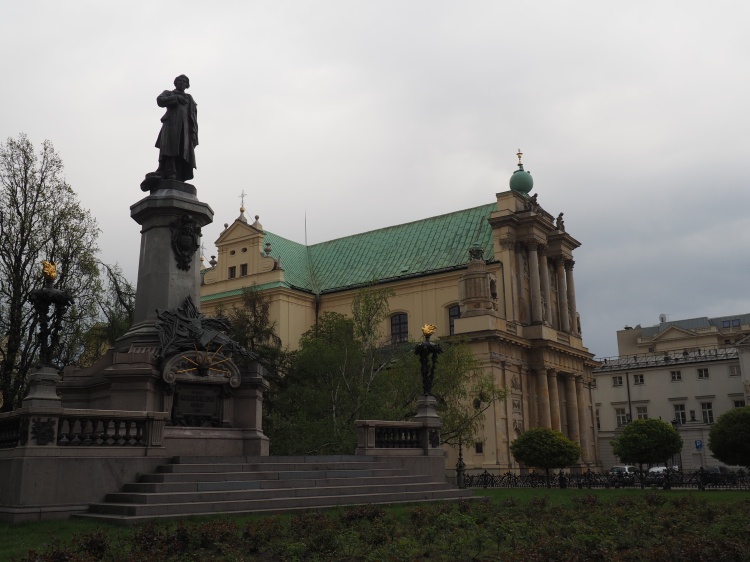 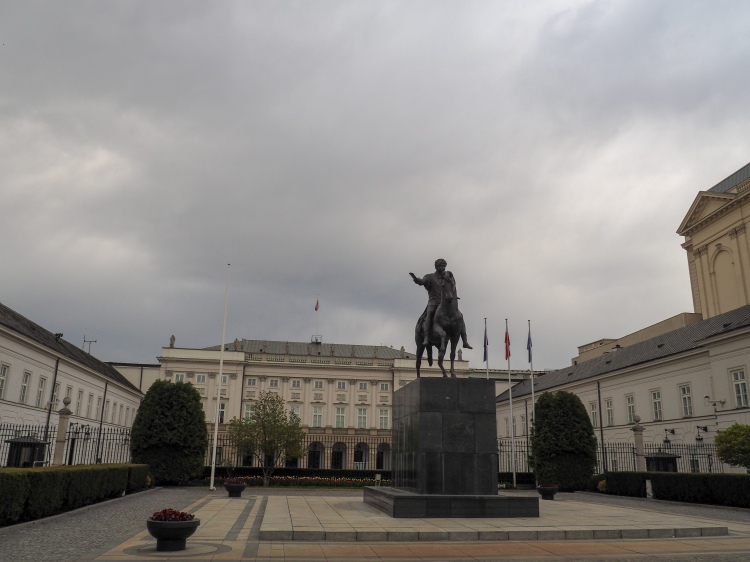 From there, we turned a couple of corners and walked to the Tomb of the Unknown Solider on the outskirts of Pilsudski Square. It’s a monument dedicated to the unknown soldiers of Poland who gave their lives in various wars and battles. 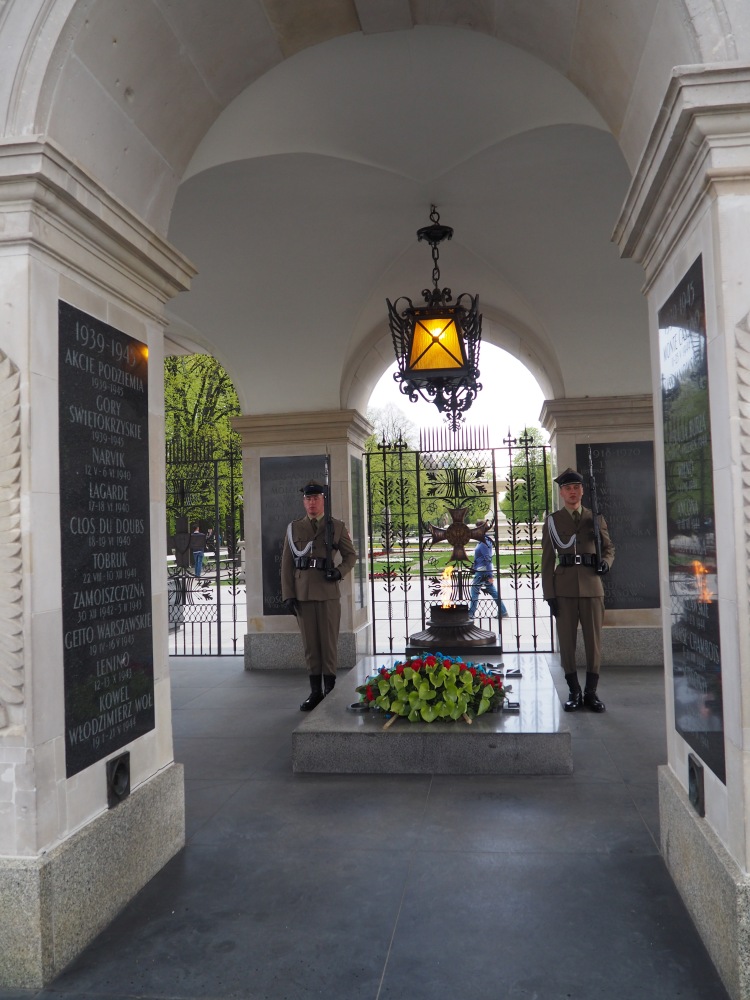 The monument is situated right next to Saxon Garden, a large public garden and the oldest public park in Warsaw. It’s a pretty park, with a number of statues depicting various concepts like Intellect and Geography. Also of interest are the benches dedicated to another one of Warsaw’s famous residents, Chopin. The benches memorialize places in Warsaw that may have played an important role in Chopin’s life. Also, they play music. 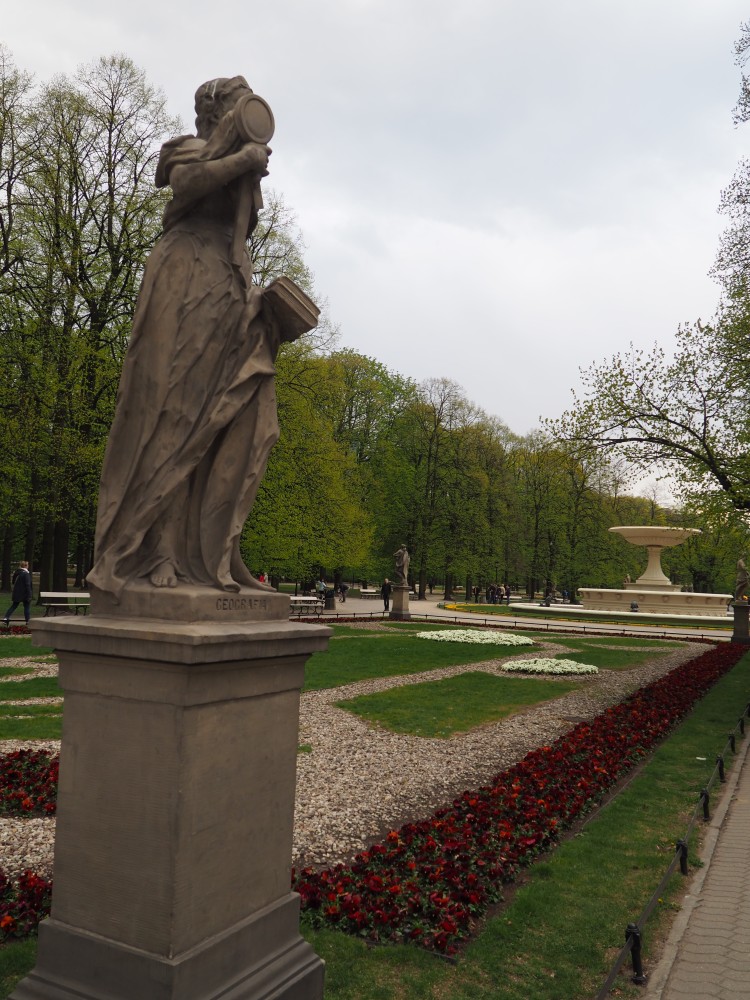 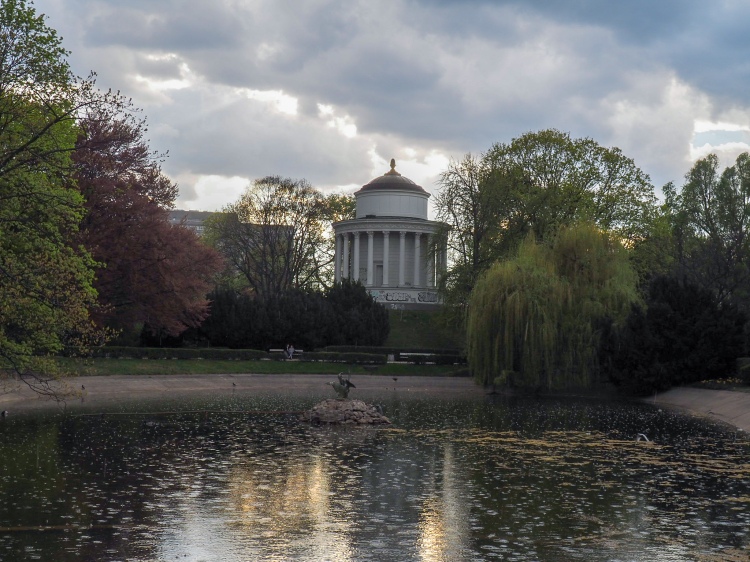 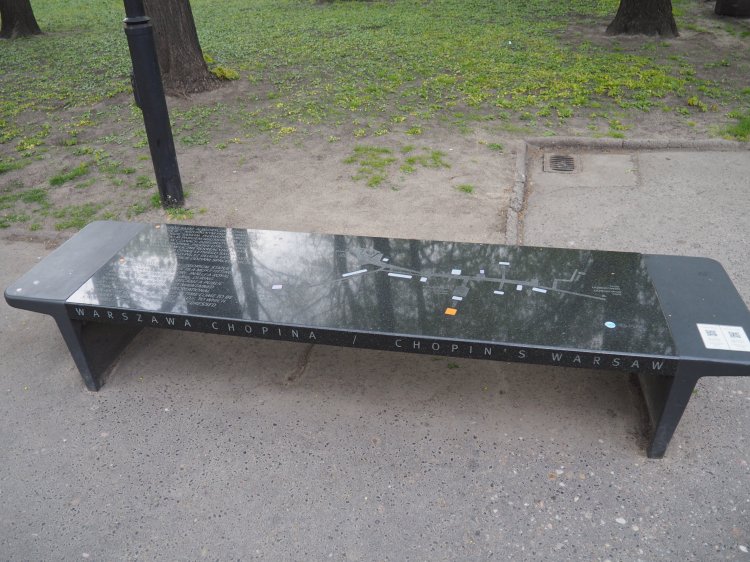 It was around this time that the gray and ominous skies we’d seen throughout the afternoon opened up and it started raining. It never rained too hard, but just enough for us to have to stop periodically to get shelter. It didn’t help that none of us had our umbrellas with us.

We circled around aimlessly for a little while before we hit the Warsaw opera house. On the upside, it stopped raining at this point. The downside was that we were now in search of a place that had a bathroom and, given that it was Easter, there were not many options that were open. We found a place eventually and were back on our way. 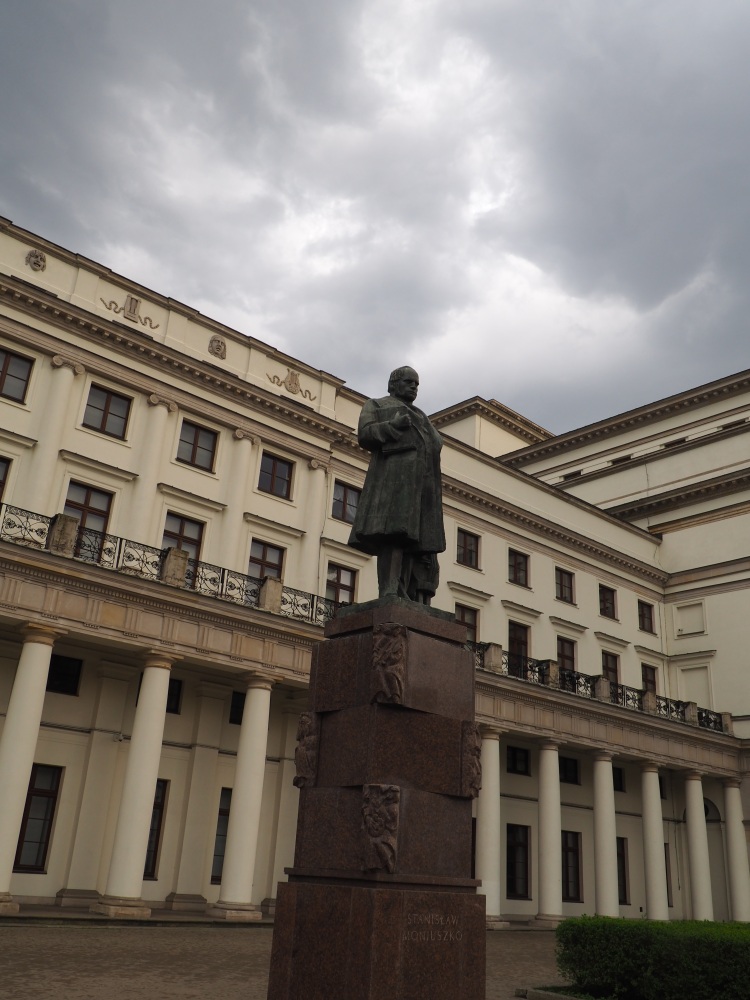 Our next stop required a bit of walking, but it was an important one as it was the monument dedicated to the Warsaw Uprising, one of the most devastating events of the city’s history that left it almost completely destroyed. 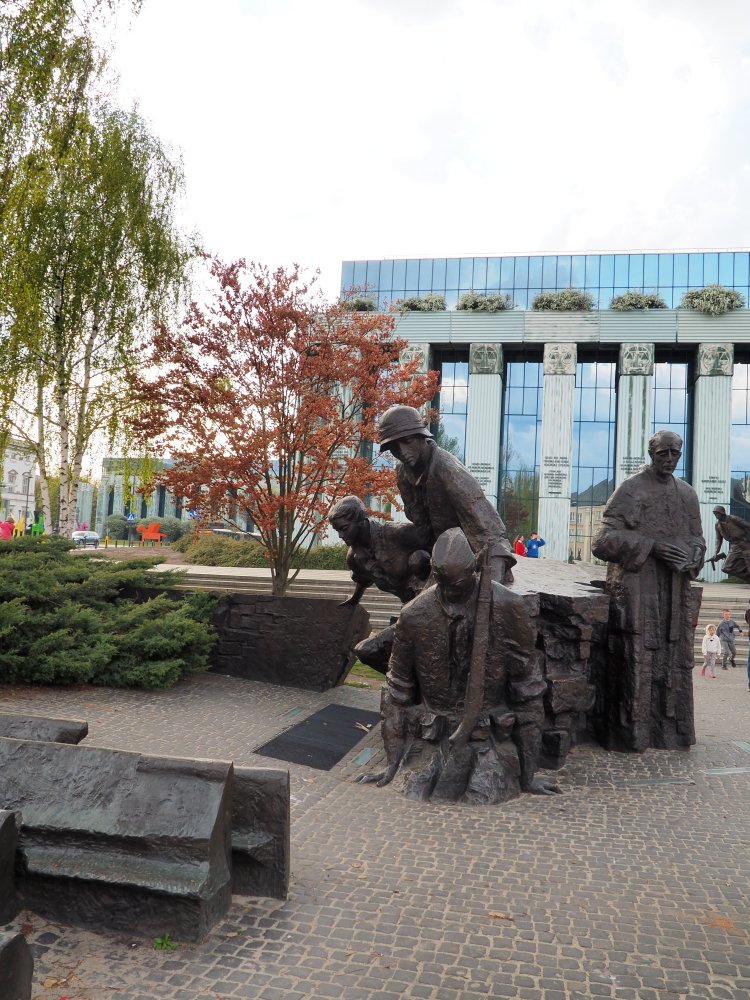 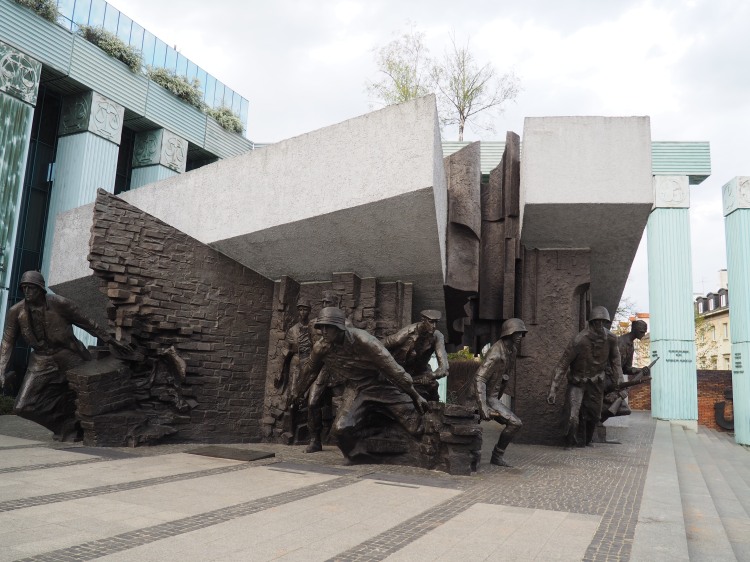 It happened to be right next to the Supreme Court of Poland. The architecture for that building is a little interesting, but we found an interesting series of statues where I think the back of the building was. There are three large statues of women holding up parts of the building. The statues are supposed to represent faith, hope and love. I don’t think the guards were happy with how long we lingered there for photos. 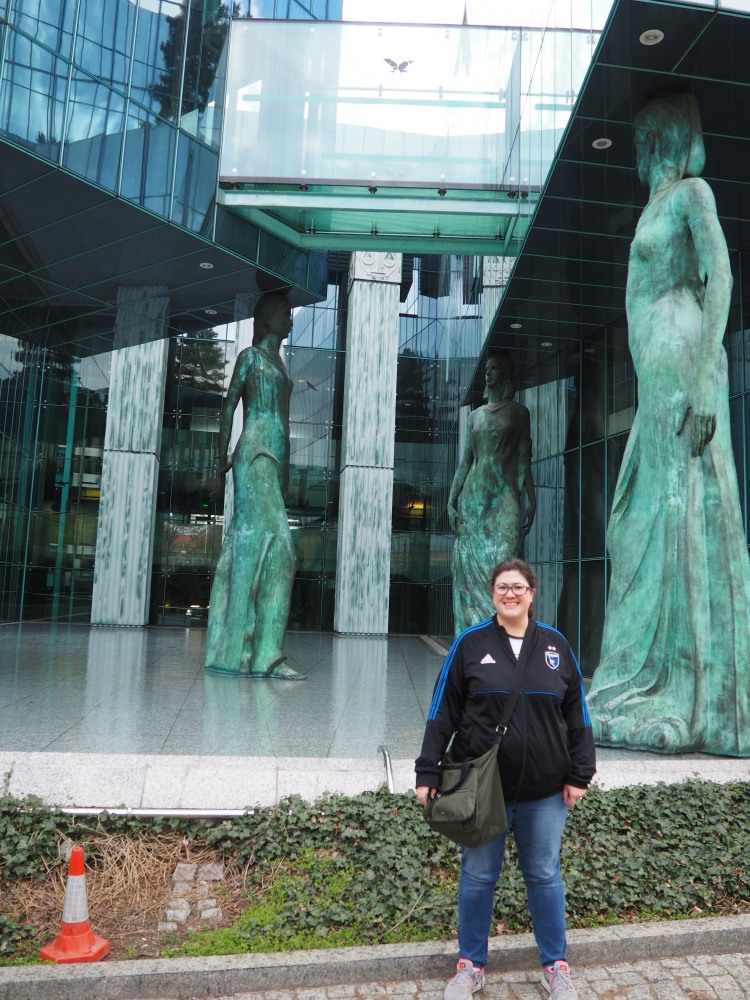 Very close to the Supreme Court were the markers to indicate where the walls of the Warsaw Ghetto once stood. This was one of the largest, if not the largest, ghettos of that time. 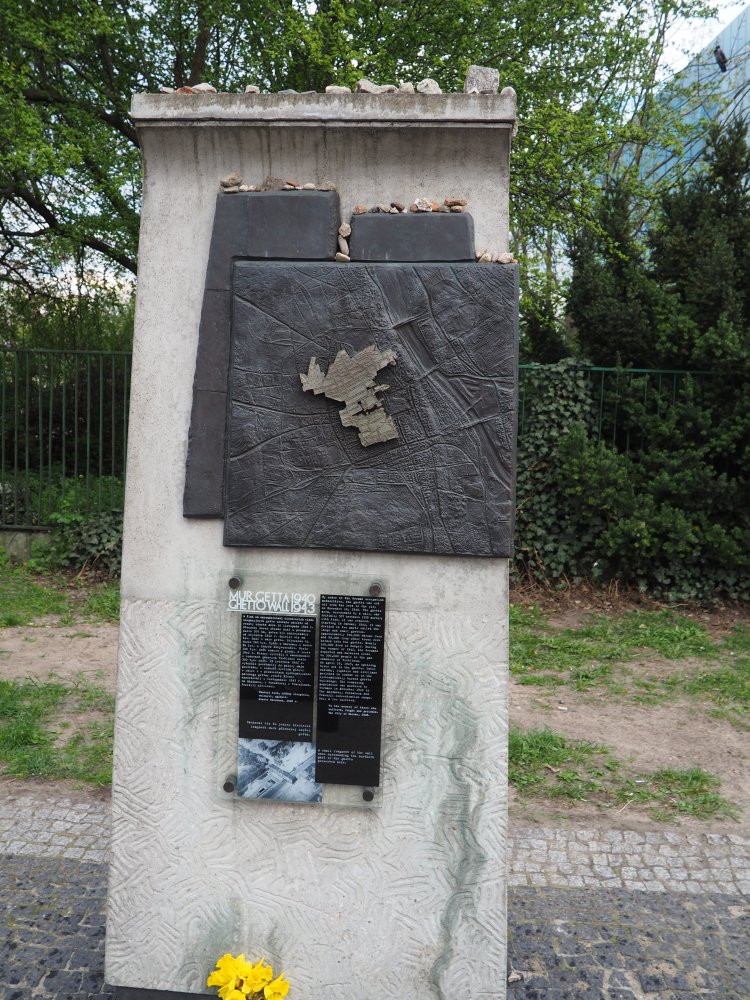 We started making our way back towards Old Town. We made a quick stop by the Marie Curie Museum. Given that it was late afternoon on a Sunday and holiday, the museum was closed. I expected that much, but was hoping for a statue outside of the museum with which I could take a quick photo. Unfortunately, no such luck. 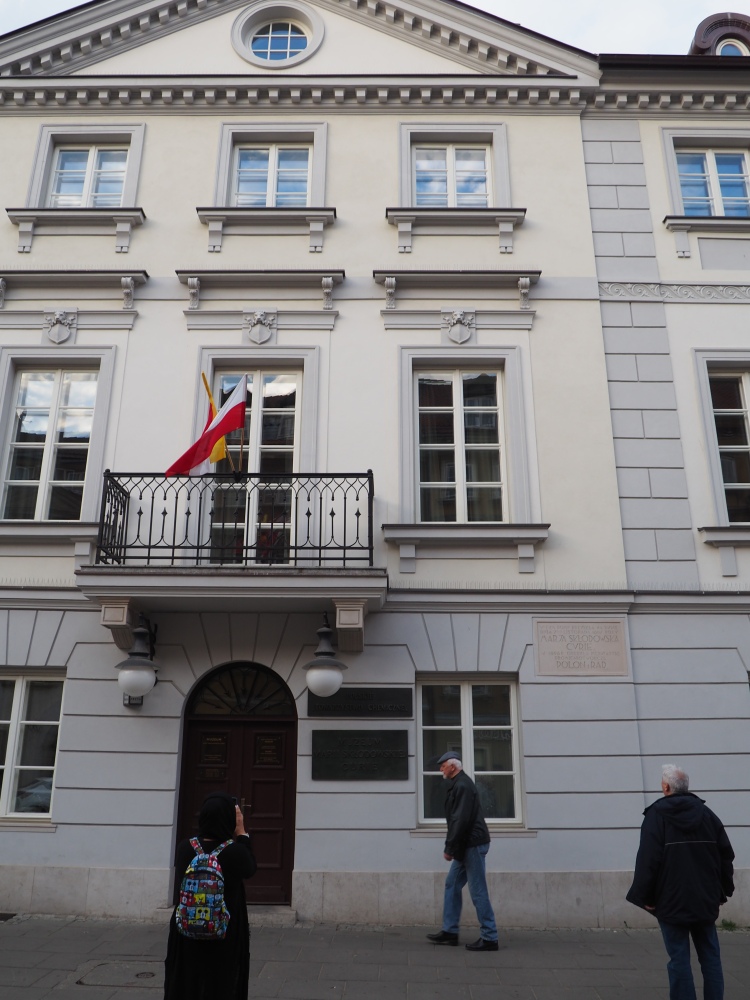 And, just like that, we made it to the Warsaw Barbican, the walled fortress just outside of Old Town. We walked on the city for a while and for a nice view of the barbican. Pro tip for the wall, though, it’s uneven and not good for people who are very talented at tripping on things. 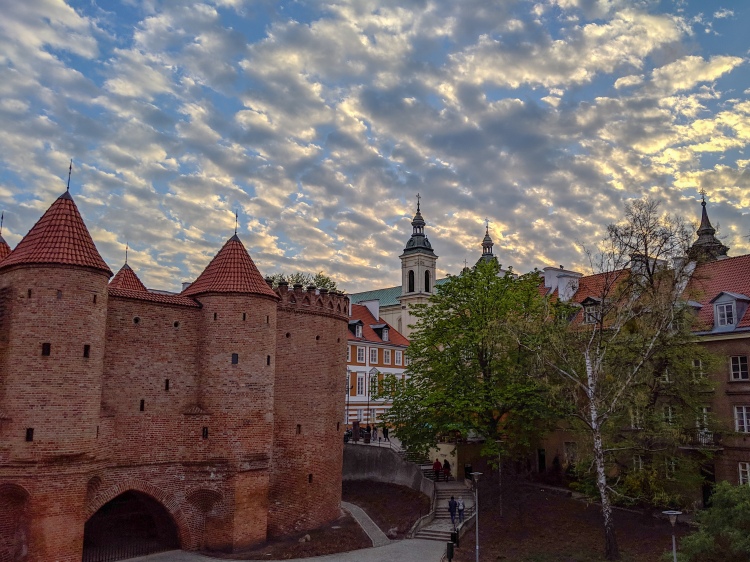 And with that, we were back in the heart of old town and the big Market Square. There was more shopping involved and, finally, some food. We were supposed to finally try some zapiekanka since we missed it in Krakow, but ended up going for a sit down meal to cap off a very busy day. We finally got back inside just in time for it to start raining again. 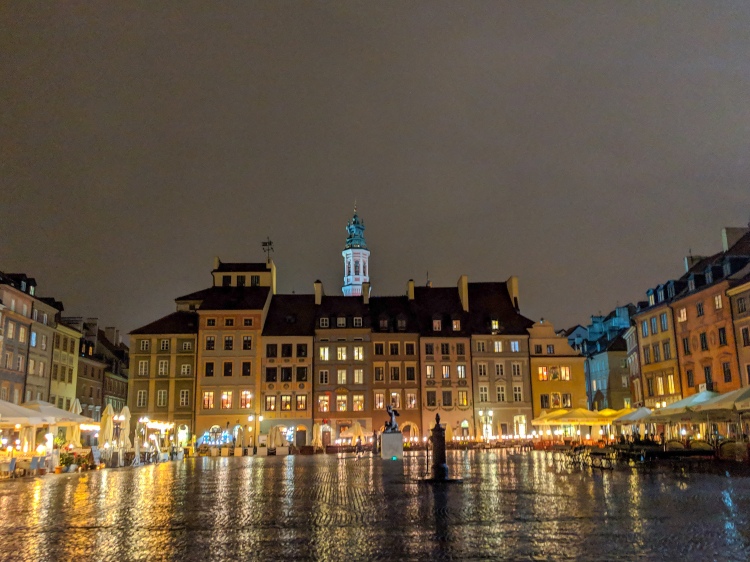 Our flight back to Switzerland was the next afternoon, which gave us just about enough time to eat an early lunch and grab a taxi to the airport. Unfortunately, though, we made the mistake of sitting outside to eat (to be fair, the restaurant didn’t have indoor seating), and it was very cold and very windy. It was a short trip to Warsaw, but we managed to squeeze a lot into the day.