So, we’ll start with this. We loved Porto. Due to the flight schedule, our stay two weeks ago was short but we left wanting to come back. The food and drinks were good, the sights were beautiful and we were left wanting more of both Porto and Portugal in general. I can’t believe it was only two weeks ago, though. Feels like it was ages ago. 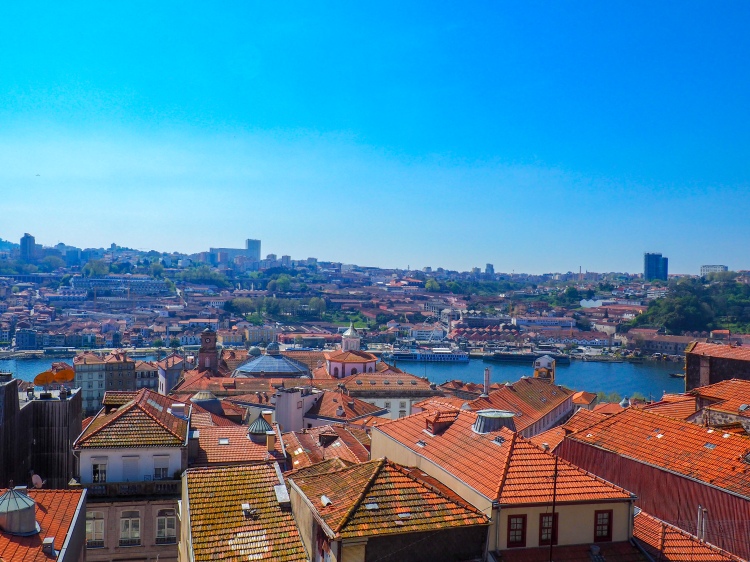 We flew in late Friday night and stayed at the Sheraton in Porto, a few miles outside of Old Town. It was easy enough to get to Old Town via public transit, even if it took a little circling around the area to find the station. We made it, though, and started our tour of Porto in Gomes Teixeira Square, where we met with our tour guide for a walking tour of the city.

We started our tour looking at some of the city’s famous tiles before going into the very ornate Igreja das Carmelitas. It was the church that the nuns attended, next door to the church for the priests. There is a secret house in between that our tour guide told us was used for secret rendezvous. 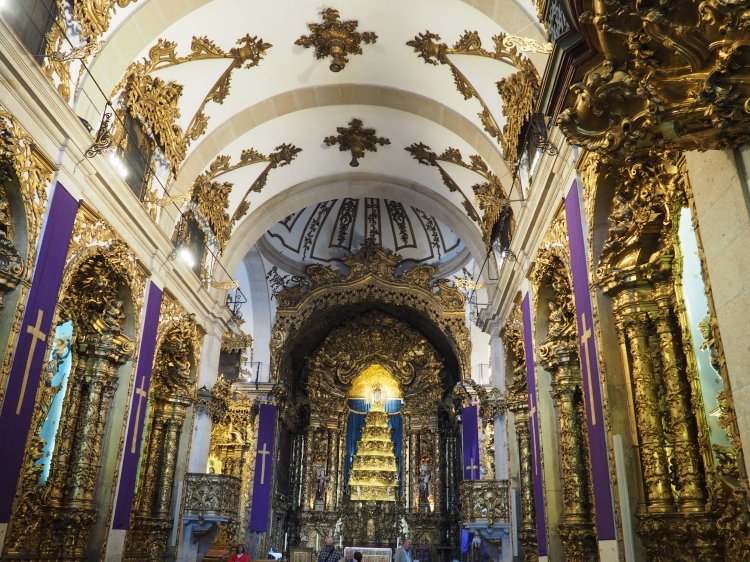 We made our way up through a Saturday market, where at 10:30 am people were drinking wine and basking in the warm Saturday morning.

We weren’t there for the market, but for the Bank of Tiles, a repository of some of the city’s famous and beautiful tiles. A lot of the tiles that were removed from houses that were taken down, for example, ended up at the Bank of Tiles. Entry is free and it’s not that large, but the tiles are something else. We were asked to choose our favorites and mine was obviously one with dogs on it. 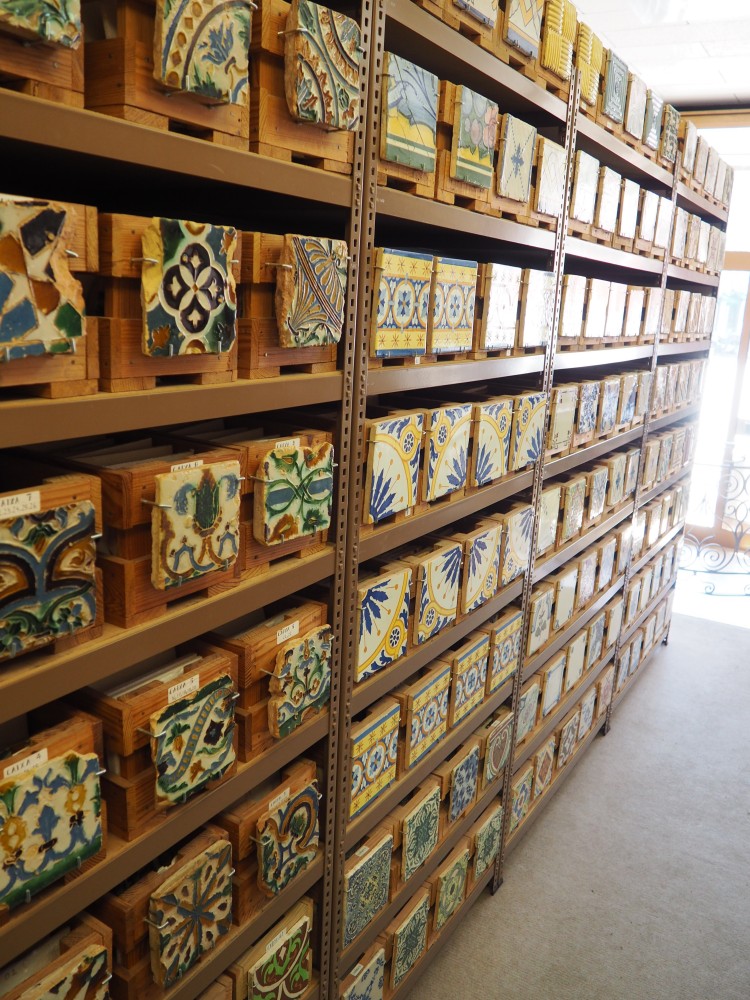 We continued to make our way around the Old Town, stopping in front of the famous Livraria Lello (known for being one of JK Rowling’s inspirations and also just being generally Instagram-friendly). He didn’t want to go in because he hates the crowds in there, but told us we should on our own. We saw the famous clock tour of town and then were brought down a quiet alley to a gorgeous view of the city. 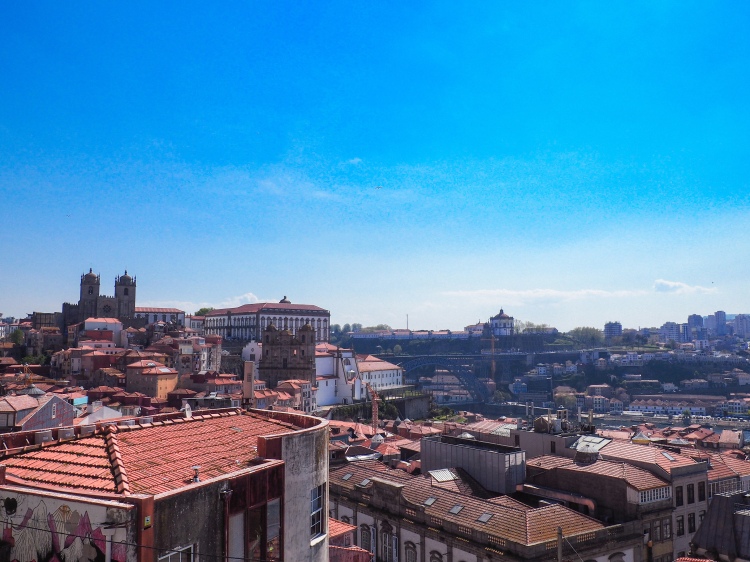 We continued down hill (knowing that we were going to have to make our way back up the hills) and passed by the Praca da Liberdade and made our way to Porto’s famous train station. The walls of the train station are covered in painted tile telling the history of the city and Portugal, which is why it is known for being one of the most beautiful train stations in the world. We lingered in the station for quite some time as our guide walked us through some of the stories on the tiles. 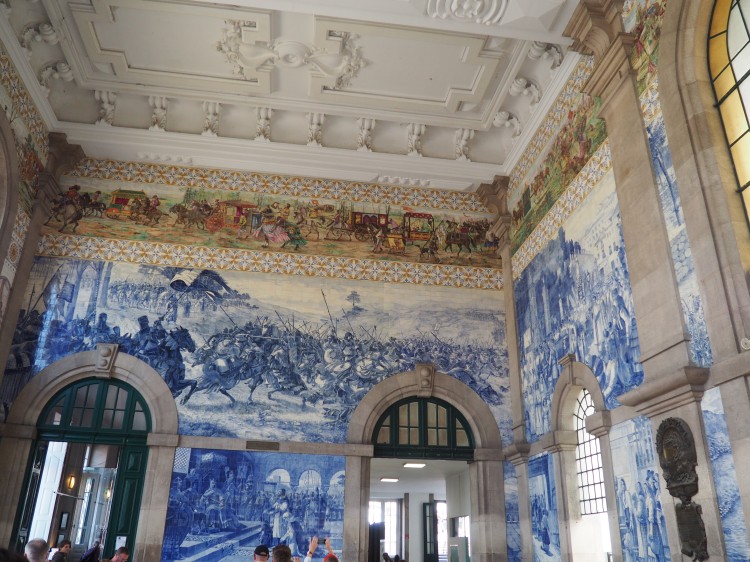 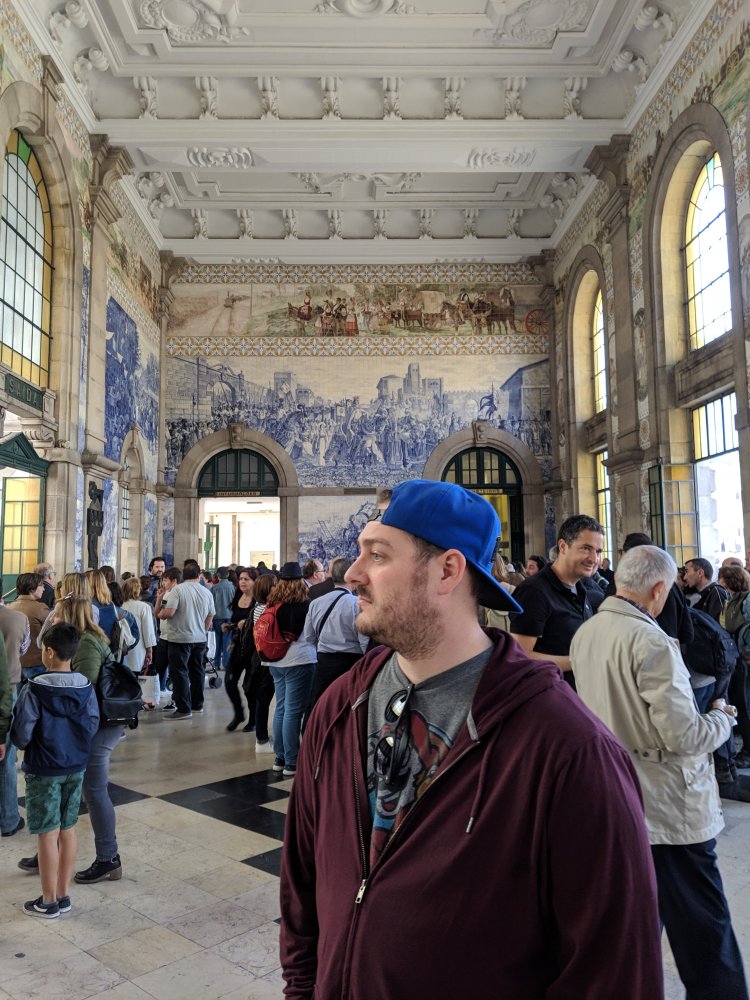 After a morning of walking around the Old Town, we stopped at a small cafe for a break and some of Portugal’s famous pastel de nata. Chris and I spent some time sharing travel stories with one of the two other couples on the tour. They’re from England, but spent some time as ex-pats in the US, so we shared some ex-pat stories as well. The food was good, too.

After the short break, we made our way back up the hill to the front of Porto’s cathedral. We didn’t go in until right after the tour. I have to say that Porto’s cathedral is pretty interesting in that there’s a lot of open space, a lot of ornate decorations and a lot of tile (obviously). 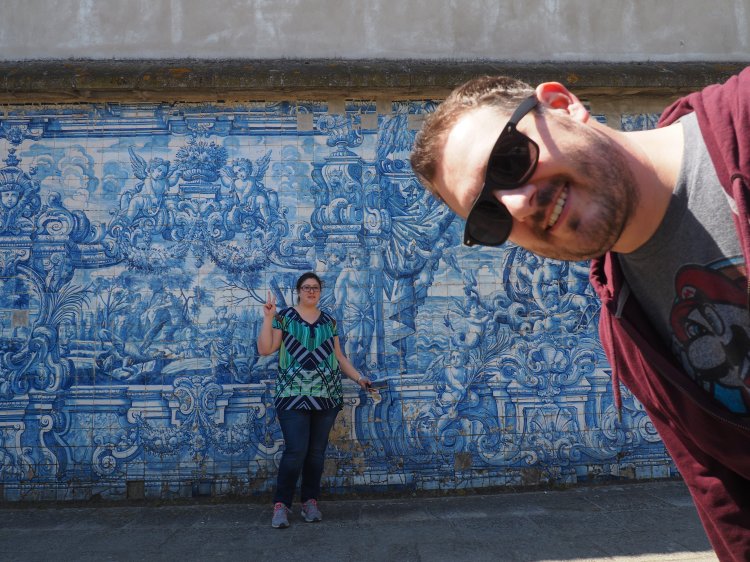 The cathedral itself was pretty, but as any good millennial should, we also used the time for a photoshoot for Chris. 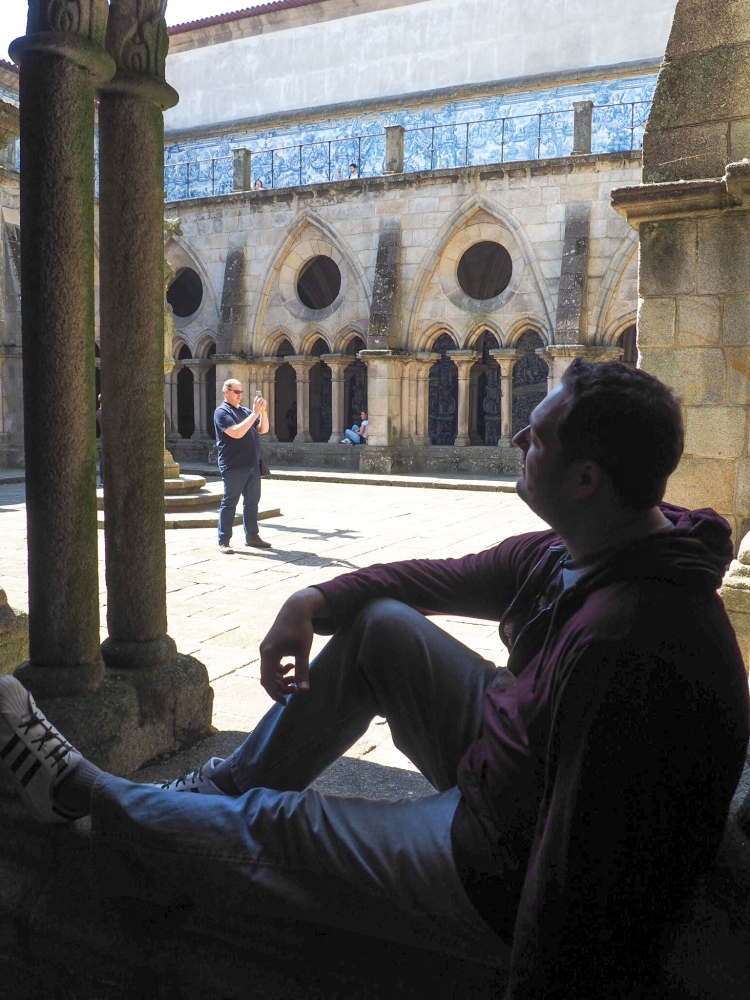 Also, the views from the cathedral are pretty spectacular. 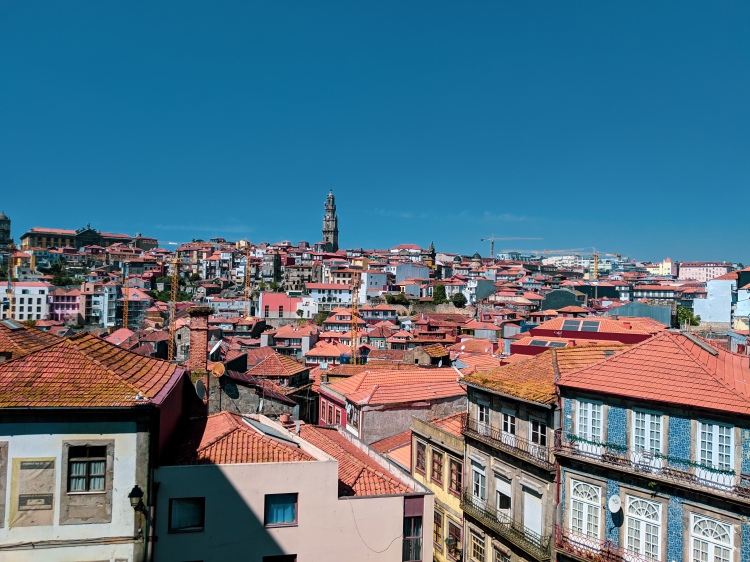 With the tour having ended, we walked across the famous Dom Luis bridge and over to the neighboring town of Gaia, where all of the famous port wine cellars are located. Our goal was to get some much-needed food in our systems (apparently pastel de nata doesn’t cut it) and hopefully do a tour of one of the cellars. 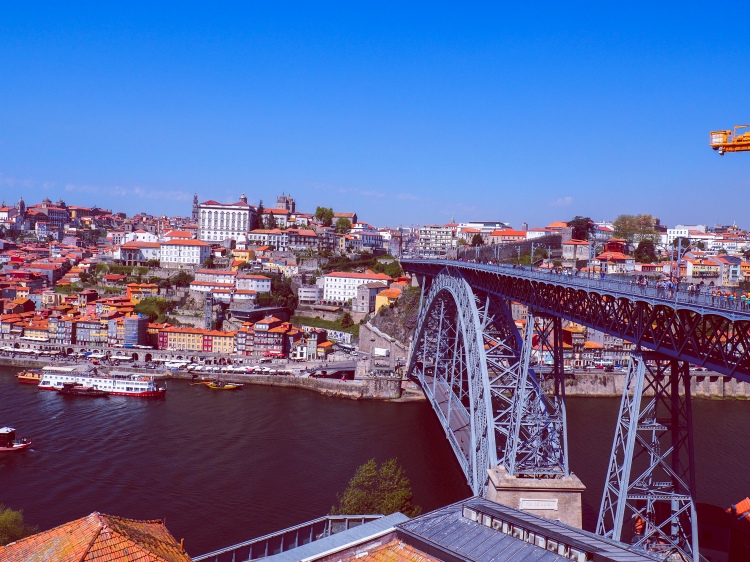 We took the cable car down the hill, in part out of laziness and in part because it looked cool. It was fun and landed us right in the midst of some cafes.

After some quick searching, we ended up at a tapas restaurant that spoke to my heart because it was named Sancho Panza and meant that Chris had to deal with me singing bits of Man of La Mancha for the rest of the day. We sat down for what we said would be a light dinner before our fancy early anniversary dinner that evening. As is our usual MO, we ordered maybe one plate too much and were left so full after our meal. 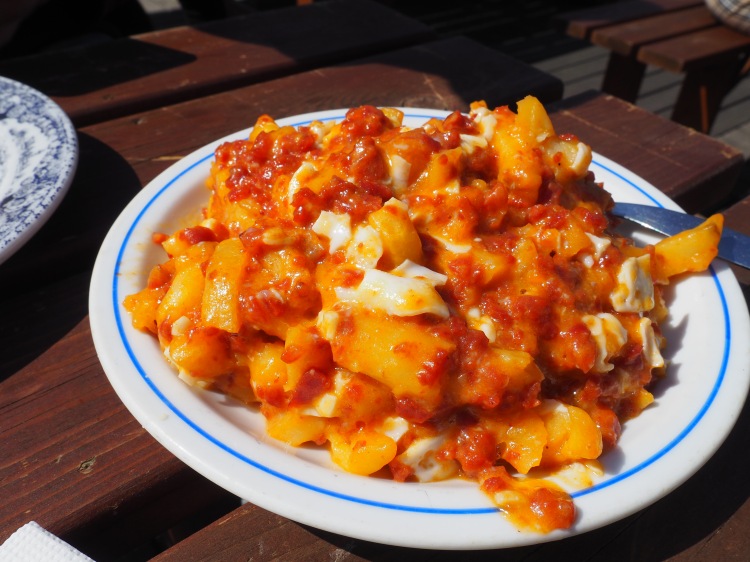 Based on a recommendation from both our tour guide and our tour friends, we decided to try out the Sandemans cellar for our tour. We walked over there to try to do a tour and found out that the next tour was at 7 pm, which would not give us much time between the tour and dinner. We considered going to a different cellar instead, but decided to just book the tour and tasting anyway. And since we were there, we decided to try some 20 year Tawny port wine before we made our way back across the river. It was so good. We followed that up with a ginja shot in a chocolate cup. Portugal is kind of wonderful.

Despite our tour guide’s ominous warnings about the crowds at Livreria Lello, one of the most beautiful book stores in the world, we decided that we had to go. We somehow managed to climb back up the giant hills to get there. At some point, given the popularity that JK Rowling brought the bookstore, they started charging entry to the store. It’s 5 Euros that can be put towards the purchase of a book, but you have to buy the tickets at a different location. I sat Chris in the line to get into the store, while I went through the line to get tickets. The timing somehow worked out very well because I caught him right when he was at the front of the store.

So I’ll say this about the bookstore. Our tour guide did not lie about the crowds. Oh my god. Those crowds were intense and it was near impossible to get through all the vanity shots of the stairs. You have to fight the crowds to even look at the book options and, of course, there is a whole section dedicated to Harry Potter (obviously). Despite the crowds, though, you cannot deny that it is a beautiful bookstore. Although, having done two hip bookstores back to back, I have to say that I liked the old musty charm of Acqua Alta in Venice a little more. Nevertheless, it was a beautiful store. 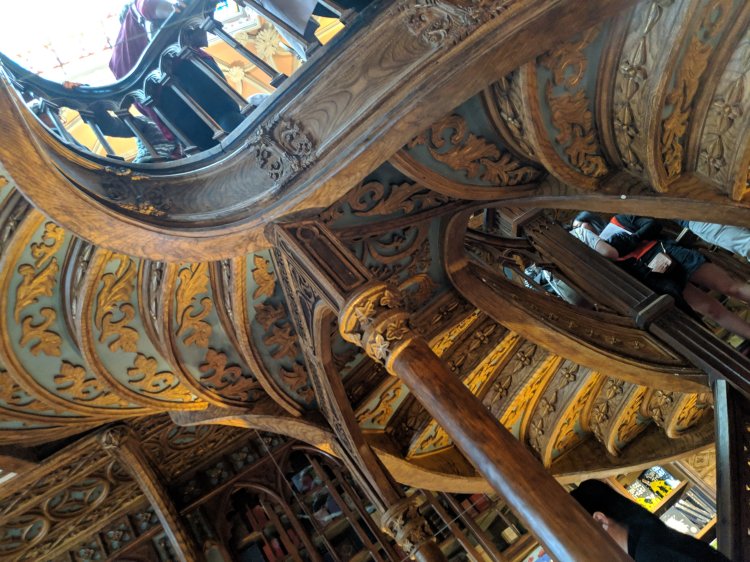 It was about that point in the day that we decided that we were kind of exhausted from a day of touring the city, so we camped out in a corner of a gelateria (with some gelato, of course), and took a short break.

It wasn’t too short, though, because we quickly picked ourselves up and made our way back down the hill and towards the Ribeira neighborhood. This, of course, started with a failed attempt to find one of the famous markets of the city. It wasn’t, but we nevertheless got some pretty glimpses of the city.

We did make our way quickly through the very colorful Ribeira neighborhood on our way back towards the Sandemans cellar. The neighborhood is very vibrant and colorful and I kind of wished that we would have had more time to explore it. I guess we did come back for dinner, though. 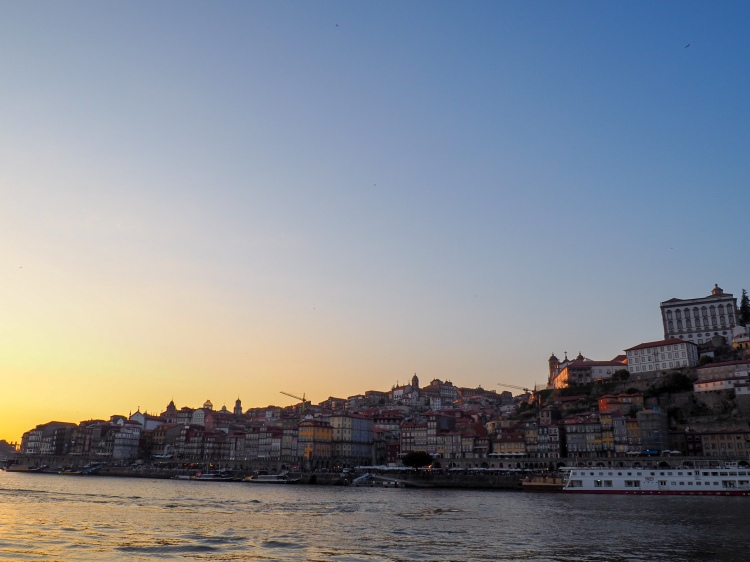 We crossed the river again for the Sandemans tour. The tour was supposed to be about 30 minutes with a tasting, which would have given us just enough time to cross back to Ribeira for our 8 pm dinner reservations. It was a tight, tight fit, but we the tour was nice. It was a lot of fun to learn about the process for how port wine is made and to see reserves that were over 100 years old. There was also the port tasting. They filled the glasses with a lot of port, so we kind of had to drink it a little too quickly in order to make it to our reservations on time. It was really good.

Our dinner was an early anniversary dinner given that our anniversary is next week and Chris is now in the US. We had reservations at Ode, which I read from several sources was really good. We had a set menu with wine pairing. The food was pretty delicious and the atmosphere was nice. They played quite a few show tunes so their playlist went directly to my heart. 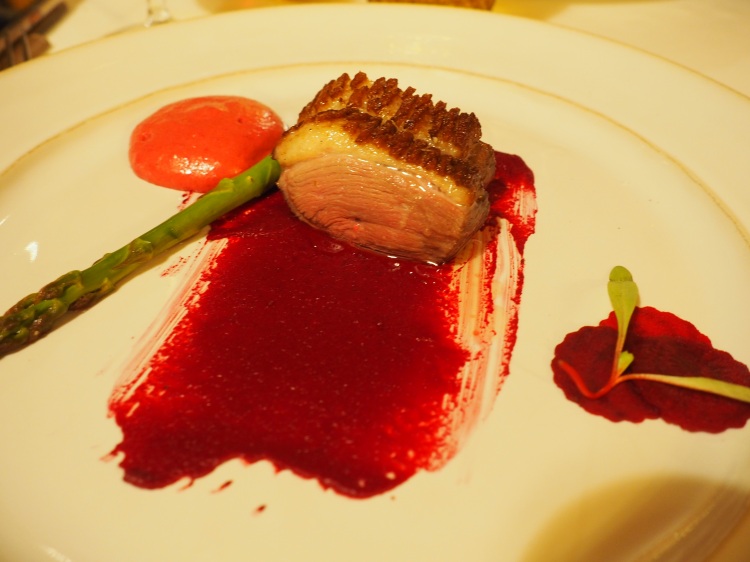 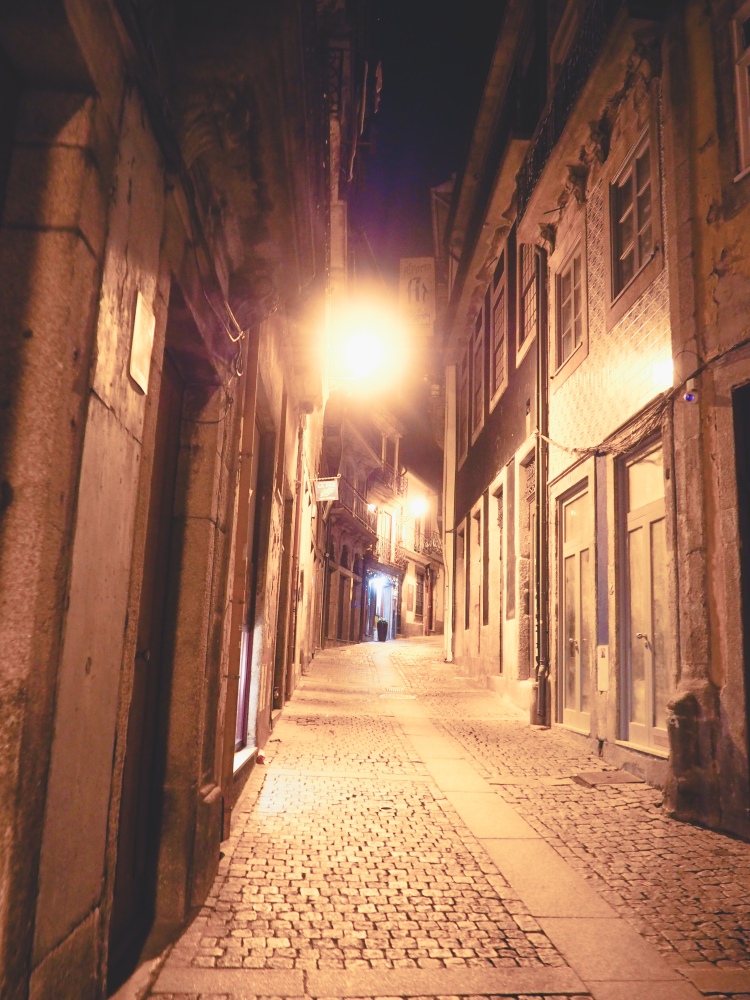 Exhausted and with a little too much food and wine in our systems, we decided to take the lazy route and asked the restaurant to call us a taxi to get home. It was a good call as it would have probably taken us much longer to climb back up the hill and get public transit back. It wasn’t too expensive, either.

Our Sunday was pretty short. We lost an hour because we hit daylight savings time, which wasn’t a big deal because we were an hour behind. We had a leisurely morning and breakfast before heading to the airport. We got port wine at the airport (including a reserve from the year we got married that we plan to open for our ten-year anniversary) and also saw a very interesting collection of CR7 gear.

So, I did not have enough room for all of the beautiful photos of the city, but we’ll just end with me reiterating the fact that Porto was a beautiful, picturesque and fun city. We hadn’t even left the city before we started discussing that we needed to get back. 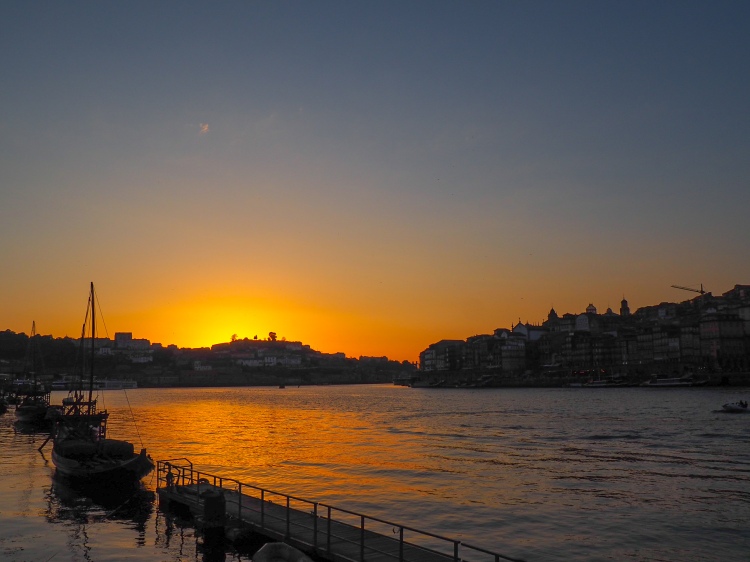 6 thoughts on “Trip to Porto”